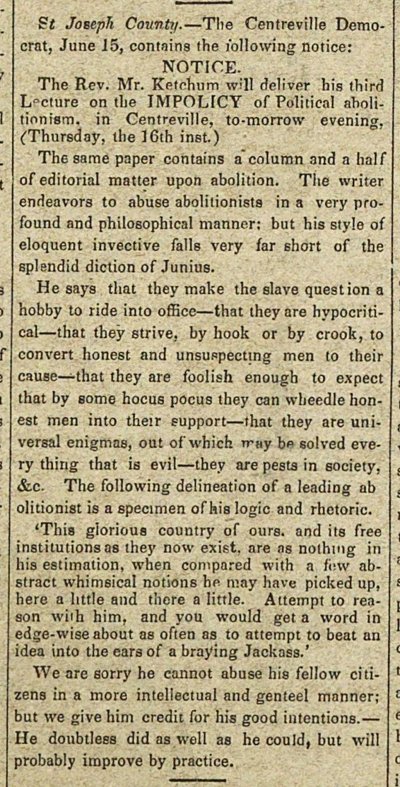 -The Centrevillecrat, June 15, contains (he Ã¯bllowing notice: NOT ICE. The Rev. Mr. Kptrhiim wilt deliver his third Lcture on the IMPOLÃCY of Political abolitionism. in Centreville, to-morrow evening. (Thursday, the 16th inst) The same paper contains a column and a half of editorial matter upon abolition. The writer endeavors to abuse abolitionists in a very profound and philosophical manner; but his style of eloquent invective falls very far short of the splendid diction of Juniue. He says that they make the slave question a hobby to ride into office - that they are hypocritical - that they strive, by hook or by crook, to convert honest and unsuspecting men to their cause- that they are foolish enough to expect that by eome hocus pocus they can wheedle honest men into their support - that they are universal enigmas, out of which rray bf solved every thing that is evil - tbey are pesta in society, &c The following delineation of a leading ab olitionist is a specimen of his logic and rhetoric.'This giorioua country of ours. and Is free institutionsas they now exist. are ns nothmg in his estitnation, when compared with a fi;w abstract whim8ical notions he may have picked up, here a little and thcre a Hule. Attempt to renson wiih him, and you would get a word in edge-wiseabout as often as to attempt to beat an idea into the ears of a braying Jackass.' We are sorry he cannot abuse his fellow citizens in a more intellectual and genteel manner; but we give him credit for his good intentions. - He doubtless did as well as he could, but will probably improve by practice.