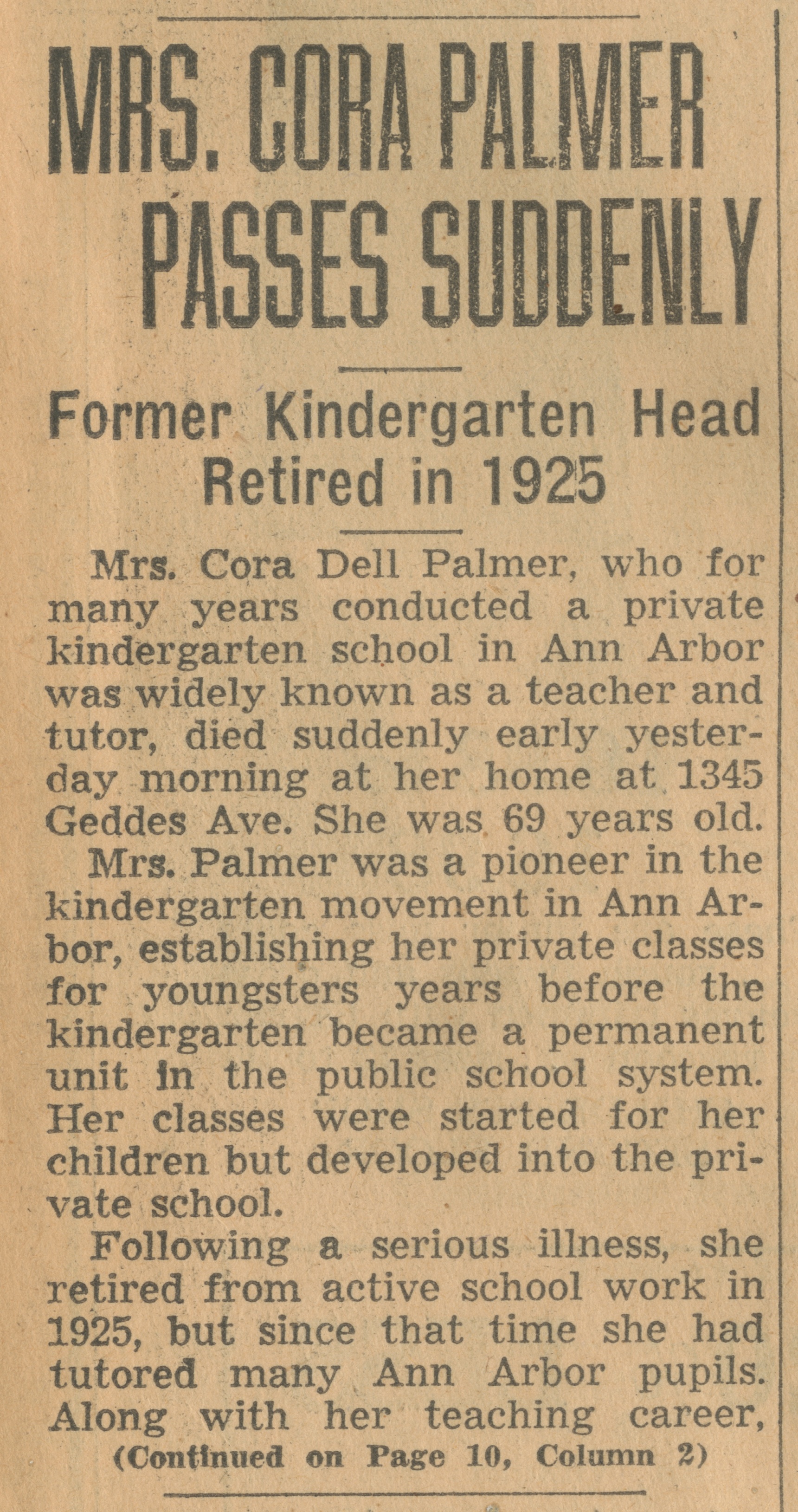 Former Kindergarten Head Retired in 1925
Mrs. Cora Dell Palmer, who for many years conducted a private kindergarten school in Ann Arbor was widely known as a teacher and tutor, died suddenly early yesterday morning at her home at 1345 Geddes Ave. She was 69 years old.
Mrs. Palmer was a pioneer in the kindergarten movement in Ann Arbor, establishing her private classes for youngsters years before the kindergarten became a permanent unit in the public school system. Her classes were started for her children but developed into the private school.
Follow a serious illness, she retired from active school work in 1925, but since that time she had tutored many Ann Arbor pupils. Along with her teaching career,
(Continued on Page 10, Column 2)
MRS. CORA PALMER DIES AT HER HOME
(Continued From Page 1)
she had been closely identified with church work and for 25 years was superintendent of the cradle roll and primary department of the First Methodist Sunday school here during the pastorate of the late Dr. Arthur W. Stalker.
Was Church Worker
She herself joined the Methodist church at North Stockbridge in early childhood, passing through the various departments of religious work, singing in the choir, teaching in the Sunday school and leading Epworth League groups. She was instrumental in organizing and grading many Sunday schools in this part of the state.
Mrs. Palmer was active in the King's Daughters, particularly in the Hospital circle and had taught in the hospitals before the school units were organized. She was a member of the Ann Arbor Women's club, and civic organizations.
She was born in Stockbridge, the daughter of pioneer residents who came to this section of the state by oxcart from New York. After obtaining all possible education in the schools in the vicinity of Stockbridge, she started teaching at the age of 18 years in order to finance a college education.
Studied Here
She attended Michigan State Normal college, Mrs. Treat's kindergarten training school in Grand Rapids, the University of Michigan and Michigan State college, where she was a charter member of Feronian. She taught for eight years in her home town and then moved with her family to Ann Arbor.
Her husband, James V. Palmer, died in 1926.
She is survived by two sons, Dr. F. C. Palmer of Detroit and James Rollo Palmer of Ann Arbor; two daughters, Mrs. G. H. Wotring of West Caldwell, N. J. and Miss Ione Palmer of Ann Arbor; seven grandchildren; two brothers, Prof. Charles Stocking of Ann Arbor and Eugene Stocking of Owosso; two nephews and a niece.
Funeral services will be held at 2 o'clock Saturday afternoon at the residence with Rev. L. L. Finch officiating. Burial will be made in the family lot at Stockbridge. Friends may call at the residence.