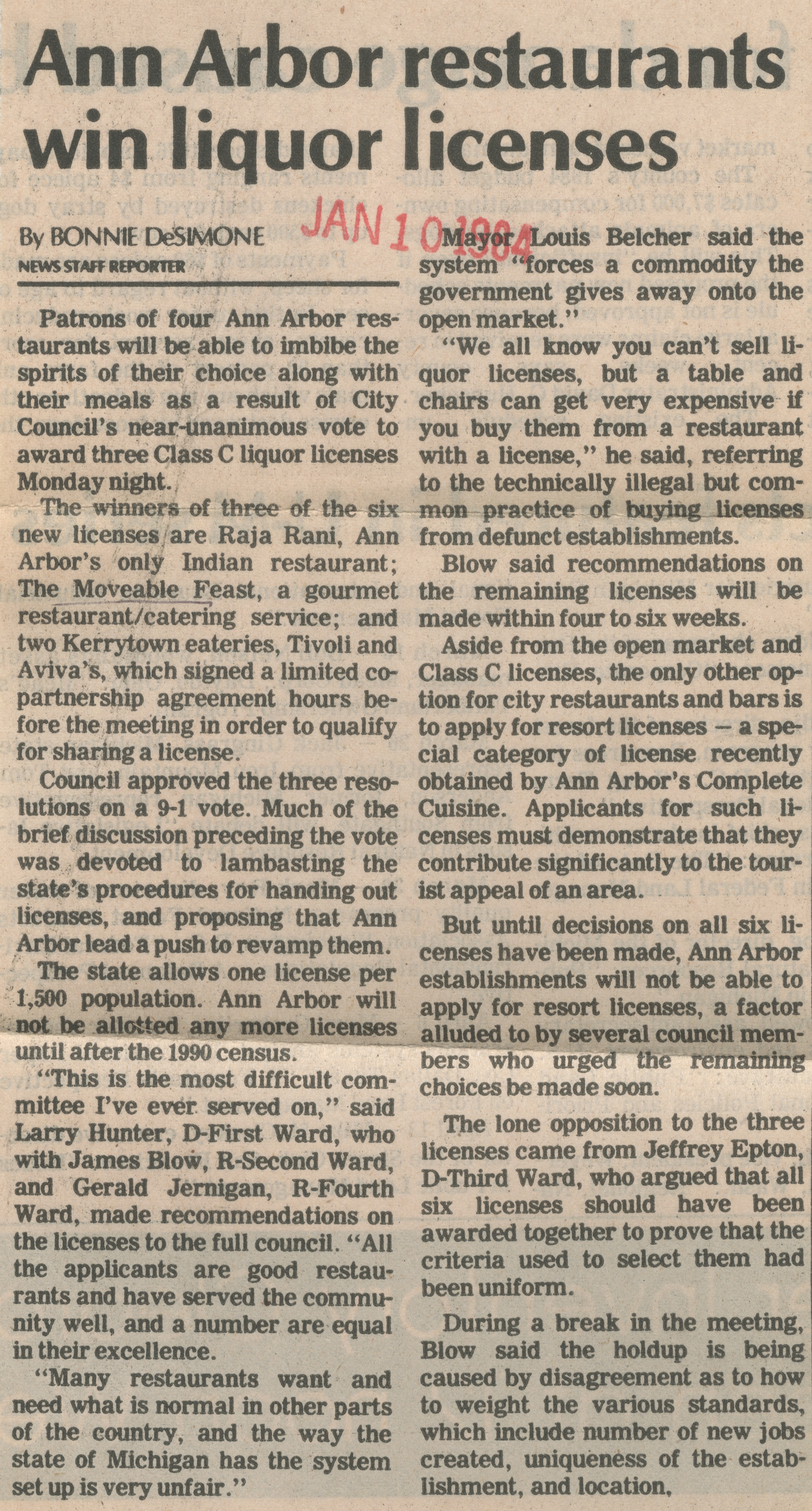 Patrons of four Ann Arbor restaurants will be able to imbibe the spirits of their choice along with their meals as a result of City Council’s near-unanimous vote to award three Class C liquor licenses Monday night.

The winners of three of the six new licenses are Raja Rani, Ann Arbor’s only Indian restaurant; The Moveable Feast, a gourmet restaurant/catering service; and two Kerrytown eateries, Tivoli and Aviva’s, which signed a limited co-partnership agreement hours before the meeting in order to qualify for sharing a license.

Council approved the three resolutions on a 9-1 vote. Much of the brief discussion preceding the vote was devoted to lambasting the state’s procedures for handing out licenses, and proposing that Ann Arbor lead a push to revamp them.

The state allows one license per 1,500 population. Ann Arbor will not be allotted any more licenses until after the 1990 census.

“This is the most difficult committee I’ve ever served on,” said Larry Hunter, D-First Ward, who with James Blow, R-Second Ward, and Gerald Jernigan, R-Fourth Ward, made recommendations on the licenses to the full council. “All the applicants are good restaurants and have served the community well, and a number are equal in their excellence.

“Many restaurants want and need what is normal in other parts of the country, and the way the state of Michigan has the system set up is very unfair.”

Mayor Louis Belcher said the system "forces a commodity the government gives away onto the open market.”

“We all know you can’t sell liquor licenses, but a table and chairs can get very expensive if you buy them from a restaurant with a license,” he said, referring to the technically illegal but common practice of buying licenses from defunct establishments.

Blow said recommendations on the remaining licenses will be made within four to six weeks.

Aside from the open market and Class C licenses, the only other option for city restaurants and bars is to apply for resort licenses -- a special category of license recently obtained by Ann Arbor’s Complete Cuisine. Applicants for such licenses must demonstrate that they contribute significantly to the tourist appeal of an area.

But until decisions on all six licenses have been made, Ann Arbor establishments will not be able to apply for resort licenses, a factor alluded to by several council members who urged the remaining choices be made soon.

The lone opposition to the three licenses came from Jeffrey Epton, D-Third Ward, who argued that all six licenses should have been awarded together to prove that the criteria used to select them had been uniform.

During a break in the meeting, Blow said the holdup is being caused by disagreement as to how to weight the various standards, which include number of new jobs created, uniqueness of the establishment, and location.