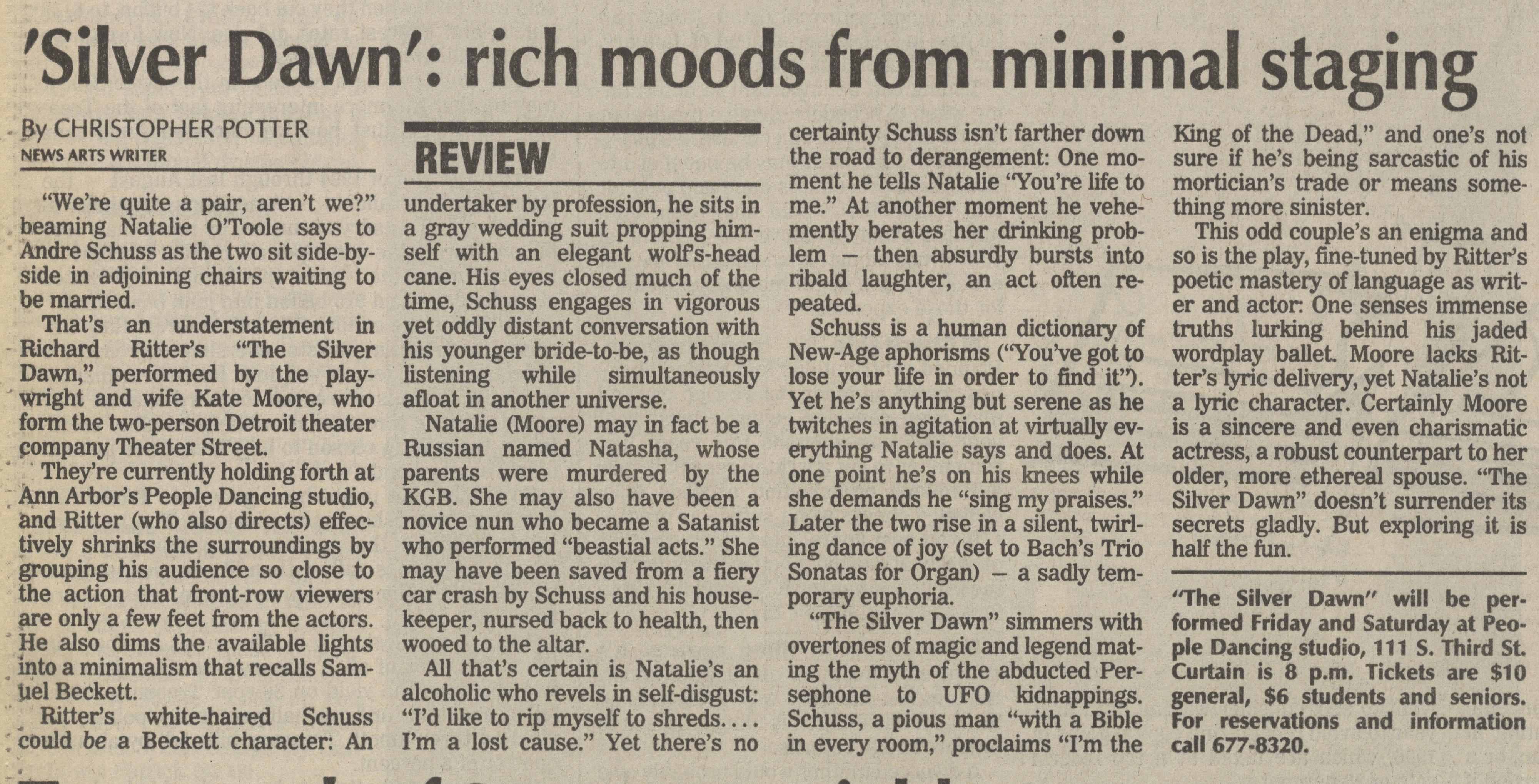 's°| D '-'h df lt'
I VEI' RWI1 . |‘lC ITIOO S I‘Om mlhlmd S dglhg
» By CHRISTOPHER POTTER ' certainty Schuss isn’t farther down King of the Dead,” and one’s not
News mrs wnmzn 1 . the road to derangement: One mo- sure if he’s being sarcastic of his
------------._ ment he tells Natalie “You’re life to mortician’s trade or means some-
“We’re quite a pair, aren’t we?” undertaker by profession, he sits in me.” At another moment he vehe-` thing moresinister.
beaming Natalie O’Toole says to a gray wedding suit propping him- mently berates her drinking prob- This odd coup_le’s an enigma and
" Andre Schuss as the two sit side-by- self with an elegant wolf’s-head lem -- then absurdly bursts into so is the play, fine-timed by Ritter’s
side in adjoining chairs waiting to cane. His eyes closed much of the ribald laughter, an act often re- poetic mastery of language as writ-
be married. time, Schuss engages in vigorous peated. er and actor: One senses immense
That’s an understatement in yet oddly distant conversation with Schuss is a human dictionary of truths lurking behind his jaded
- Richard Ritter’s “The Silver his younger bride-to-be, as though New-Age aphorisms (“You’ve got to wordplay ballet. Moore lacks Rit-
j Dawn,” performed by the play- ' listening while simultaneously lose your life in order to find `it”). ter’s lyric delivery, yet Natalie’s not
Wright and wife Kate Moore, who afloat in another universe. Yet he’s anything but serene as he a lyric character. Certainly Moore
form the two-person Detroit theater Natalie (Moore) may in fact be a twitches in agitation at virtually ev- isa sincere and even charismatic
company Theater Street, Russian named Natasha, whose erything Natalie says and does. At actress, a robust counterpart to her
° _f They’re currently holding forth at parents were murdered by the one point he’s on his knees while older, more ethereal spouse. “The
j Arbor’s People Dancing studio, KGB. She may also have been a she demands he “sing my praises.” Silver Dawn” doesn’t surrender its
and Ritter (who also directs) effec- novice nun who became a Satanist Later the two rise in a silent, twirl- secrets gladly. But exploring it is
tively shrinks the surroundings by who performed “beastial acts.” She ing dance of joy (set to Bach’s Trio half the fun.
, grouping his audience so close to may have been saved from a fiery Sonatas for Organ) - a sadly tem- -----r-----
1 the action that front-row viewers car crash by Schuss and his house- porary euphoria. “T he Silver Dawn" will be per-
are only a few feet from the actors. keeper, nursed back to health, then “The Silver Dawn” simmers with formed Friday and Saturday at Peo-
’ He also dims the available lights wooed to the altar. p overtones of magic and legend mat- ple Dancing studio, 111 S. Third St.
Q into a minimalism that recalls Sam- All that’s certain is Natalie’s an ing the myth of the abducted Per- Curtain is 8 p.m. Tickets are $10
nel Beckett. alcoholic who revels in self-disgust: sephone to UFO kidnappings. general, $6 students and seniors.
" _ ‘ Ritter’s white-haired Schuss “I’d like to rip myself to shreds .... Schuss, a pious man “with a Bible For _reservations and information
Qcould be a Beckett character: An I’m a lost cause.” Yet there’s no in every room,”proclaims “I’m the call 677v8320. ,