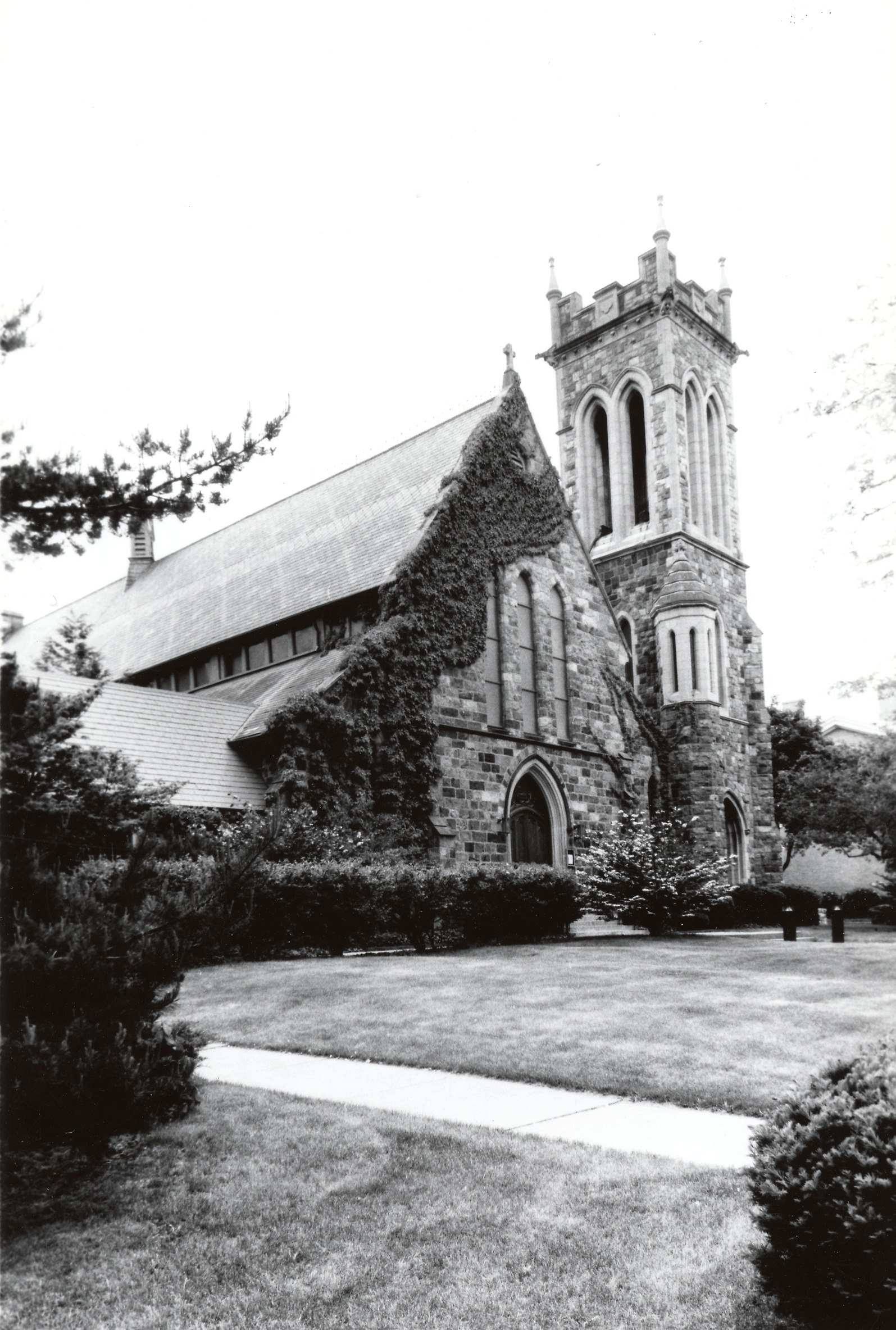 St. Andrew's Church in Ann Arbor was organized in 1828. As the church grew in numbers and wealth, its history was filled with names that are familiar as well in the progress of the town. The early congregation included the Dexter, Kingsley, Clark and Chapin families. George Corselius, popular editor of Ann Arbor's early Western Emigrant, conveyed one acre of land to the church in 1835, upon which a church building was constructed in 1839 and enlarged in 1856 to provide "free sittings" (in contrast to pew rents) for University students. This building stood just north of the present structure at some elevation from the street, and was approached by a flight of twenty steps ???_ an interesting topographical note.

When the congregation needed a larger church building, it was decided to start with only the nave, and to accept the plans and specifications of Detroit architect Gordon W. Lloyd, who, the Michigan Argus stated, "is doing so much for church architecture in the west." The corner stone was laid in June of 1868, consecration of the finished building taking place on November 10, 1869. In 1879 a chapel and rectory, also designed by architect Lloyd, were added and in the 1890s the recessed chancel and choir stalls were built. Finally, in 1903, a gift from Mrs. Love Palmer in memory of her husband Alonzo made it possible to complete Lloyd's design by constructing the tower, which added to the long, low church "just the culmination and decision which it has always needed." (Arthur Lyon Cross, History of St. Andrew's Church, 1906).

The style is English Gothic, after the style of the parish churches of Lloyd's native land. The construction material, selected field boulders, generally granite and beautifully varied in hue, were split and laid in courses, each course varying from ten to fourteen inches wide. The gable is surmounted by a stone Greek cross. The roof is laid in diamonds of different colored slate, finished with ornamental cresting of cast iron on its ridge. Lloyd incorporated unusual long clerestory windows along each side wall under the patterned roof, with quatrefoil windows to let more light into the nave. The stained glass in these windows was furnished by Friedrichs of Brooklyn, New York. The interior plan follows the typical basilica form of a central long nave flanked by side aisles. The tower, topped by battlements and conical pinnacles, is over eighty feet high. In an attached turret on the front of the tower are stairs to the second story and belfry. A pleasant enclosed cloister to the north of the sanctuary was finished in the 1960s.

Memorial gifts over the years have further embellished the interior. Of special note are the walnut eagle lectern (circa 1875) and a brilliantly colored central south windown by the renowned Louis Comfort Tiffany. Two stained glass windows were installed behind the organ chancel by Willet & Company of Philadelphia in the late 1970s as a memorial to George Hunschey, organist and choir master in the church for many years.

St. Andrew's was included in the Division Street Historic District at the request of the vestry or governing board, which is mindful of the treasure in its custody. New front doors, careful copies of the deteriorated originals, were installed in 1975.