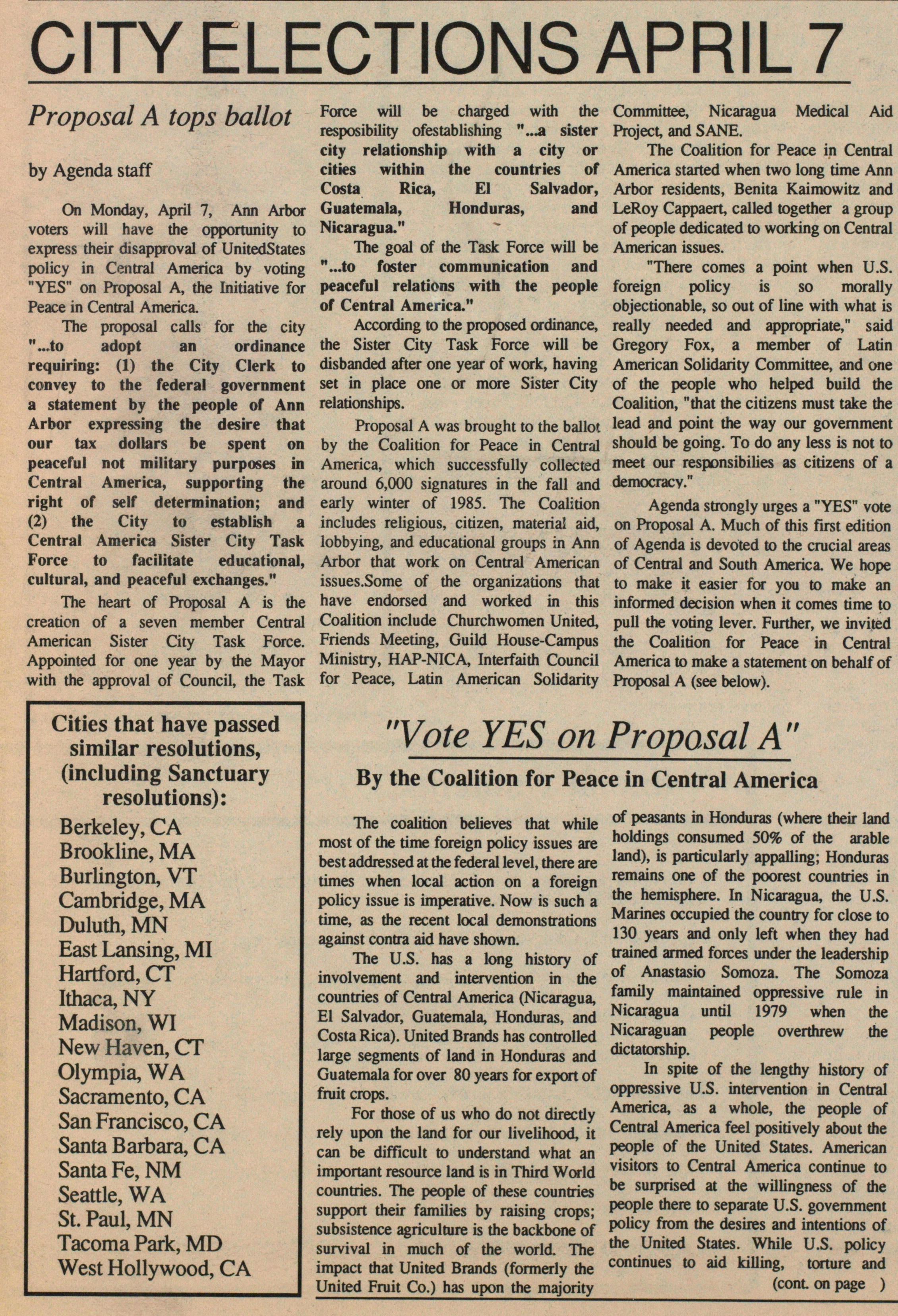 On Monday, April 7, Ann Arbor voters will have the opportunity to express their disapproval of UnitedStates policy in Central America by voting "YES" on Proposal A, the Initiative for Peace in Central America. The proposal calis for the city "...to adopt an ordinance requiring: (1) the City Clerk to convey to the federal government a statement by the people of Ann Arbor expressing the desire that our tax dollars be spent on peaceful not military purposes in Central America, supporting the right of self determination; and (2) the City to establish a Central America Sister City Task Force to facilitate educational, cultural, and peaceful exchanges." The heart of Proposal A is the creaticn of a seven member Central American Sister City Task Force. Appointed for one year by the Mayor with the approval of Council, the Task Forcé will be charged with the resposibility ofestablishing "...a sister city relationship with a city or cities within the countries of Costa Rica, El Salvador, Guatemala, Honduras, and Nicaragua." The goal of the Task Forcé will be "...to foster communication and peaceful relations with the people of Central America." According to the proposed ordinance, the Sister City Task Forcé will be disbanded after one year of work, having set in place one or more Sister City relationships. Proposal A was brought to the ballot by the Coalition for Peace in Central America, which successfully collected around 6,000 signatures in the fall and early winter of 1985. The Coalition includes religious, citizen, material aid, lobbying, and educational groups in Ann Arbor that work on Central American issues.Some of the organizations that have endorsed and worked in this Coalition include Churchwomen United, Friends Meeting, Guild House-Campus Ministry, HAP-NICA, Interfaith Council for Peace, Latín American Solidarity Committee, Nicaragua Medical Aid Project, and SANE. The Coalition for Peace in Central America started when two long time Ann Arbor residents, Benita Kaimowitz and LeRoy Cappaert, called together a group of people dedicated to working on Central American issues. "There comes a point when U.S. foreign policy is so morally objectionable, so out of line with what is really needed and appropriate," said Gregory Fox, a member of Latín American Solidarity Committee, and one of the people who helped build the Coalition, "that the citizens must tak e the lead and point the way our government should be going. To do any less is not to meet our responsibilies as citizens of a democracy." Agenda strongly urges a "YES" vote on Proposal A. Much of this first editíon of Agenda is devöted to the crucial áreas of Central and South America. We hope to make it easier for you to make an informed decisión when it comes time to pull the voting lever. Further, we invited the Coalition for Peace in Central America to make a statement on behalf of Proposal A (see below). Cities that have passed similar resolutions, (including Sanctuary resolutions): Berkeley, CA Brookline, MA Burlington, VT Cambridge, MA Duluth, MN East Lansing, MI Hartford, CT Ithaca,NY Madison, WI New Haven, CT Olympia, WA Sacramento, CA San Francisco, CA Santa Barbara, CA Santa Fe, NM Seattle, WA St.Paul,MN Tacoma Park, MD West Hollywood, CA