"Vote Yes On Proposal A" 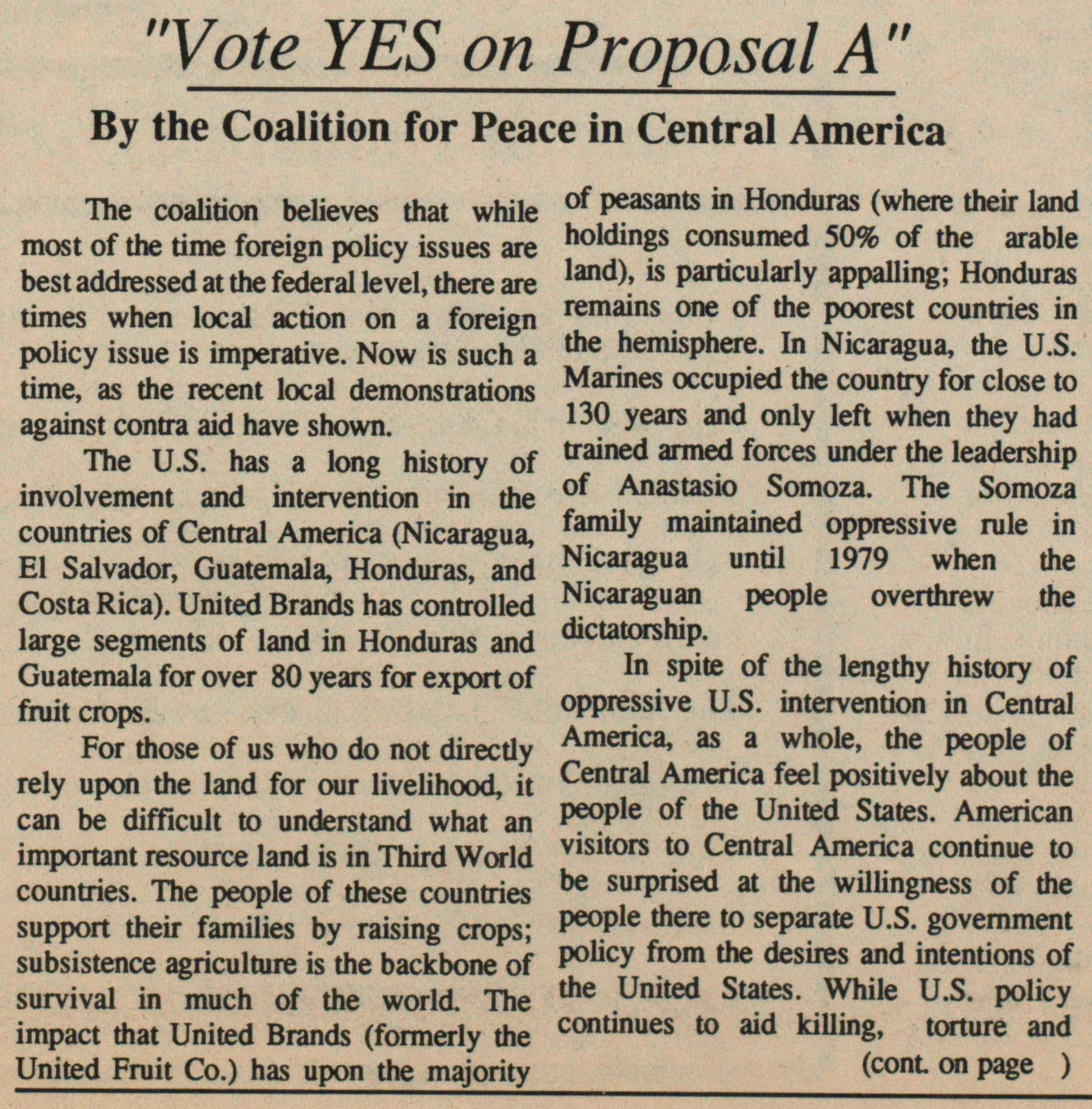 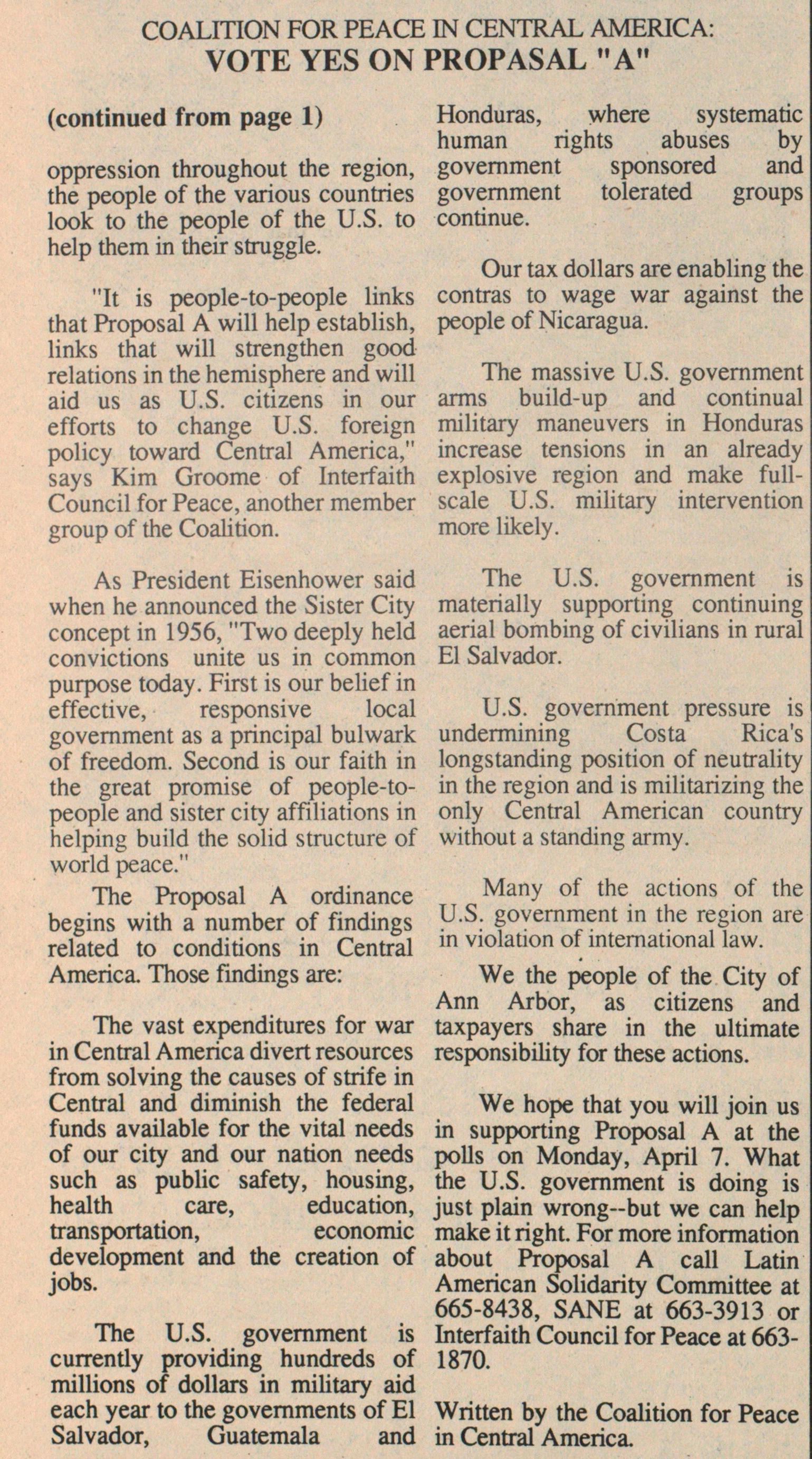 The coalition believes that while most of the time foreign poücy issues are best addressed at the federal le vel, there are times when local action on a foreign policy issue is imperative. Now is such a time, as the recent local demons trations against contra aid have shown. The U.S. has a long history of involvement and intervention in the countries of Central America (Nicaragua, El Salvador, Guatemala, Honduras, and Costa Rica). United Brands has controlled large segments of land in Honduras and Guatemala for over 80 years for export of fruit crops. For those of us who do not directly rely upon the land for our livelihood, it can be difficult to understand what an important resource land is in Third World countries. The people of these countries support their families by raising crops; subsistence agriculture is the backbone of survival in much of the world. The impact that United Brands (formerly the United Fruit Co.) has upon the majority of peasants in Honduras (where their land holdings consumed 50% of the arable land), is particularly appalling; Honduras remains one of the poorest countries in the hemisphere. In Nicaragua, the U.S. Marines occupied the country for close to 130 years and only left when they had trained armed forces under the leadership of Anastasio Somoza. The Somoza family maintained oppressive rule in Nicaragua until 1979 when the Nicaraguan people overthrew the dictatorship. In spite of the lengthy history of oppressive U.S. intervention in Central America, as a whole, the people of Central America feel positively about the people of the United States. American visitors to Central America continue to be surprised at the willingness of the people there to separate U.S. government policy from the desires and intentions of the United States. While U.S. policy continúes to aid killing, torture and (cont on page ) COALITION FOR PEACE IN CENTRAL AMERICA: VOTE YES ON PROPASAL "A" (continued f rom page 1) oppression throughout the región, the people of the various countries look to the people of the U.S. to help them in their struggle. "It is people-to-people links that Proposal A will help establish, links that will strengthen good relations in the hemisphere and will aid us as U.S. citizens in our efforts to change U.S. foreign policy toward Central America," says Kim Groóme of Interfaith Council for Peace, another member group of the Coalition. As President Eisenhower said when he announced the Sister City concept in 1956, "Two deeply held convictions unite us in common purpose today. First is our belief in effective, responsive local government as a principal bulwark of freedom. Second is our faith in the great promise of people-topeople and sister city affiliations in helping build the solid structure of world peace." The Proposal A ordinance begins with a number of findings related to conditions in Central America. Those findings are: The vast expenditures for war in Central America divert resources from solving the causes of strife in Central and diminish the federal funds available for the vital needs of our city and our nation needs such as public safety, housing, health care, education, transportation, economie development and the creation of jobs. The U.S. government is currently providing hundreds of millions of dollars in military aid each year to the governments of El Salvador, Guatemala and Honduras, where systematic human rights abuses by govemment sponsored and government tolerated groups continue. Our tax dollars are enabling the contras to wage war against the people of Nicaragua. The massive U.S. government arms build-up and continual military maneuvers in Honduras increase tensions in an already explosive región and make fullscale U.S. military intervention more likely. The U.S. government is materially supporting continuing aerial bombing of civilians in rural El Salvador. U.S. government pressure is undermining Costa Rica's longstanding position of neutrality in the región and is militarizing the only Central American country without a standing army. Many of the actions of the U.S. government in the región are in violation of international law. We the people of the City of Ann Arbor, as citizens and taxpayers share in the ultimate responsibility for these actions. We hope that you will join us in supporting Proposal A at the polls on Monday, April 7. What the U.S. government is doing is just plain wrong-but we can help make it right. For more information about Proposal A cali Latin American Solidarity Committee at 665-8438, SANE at 663-3913 or Interfaith Council for Peace at 6631870. Written by the Coalition for Peace in Central America.