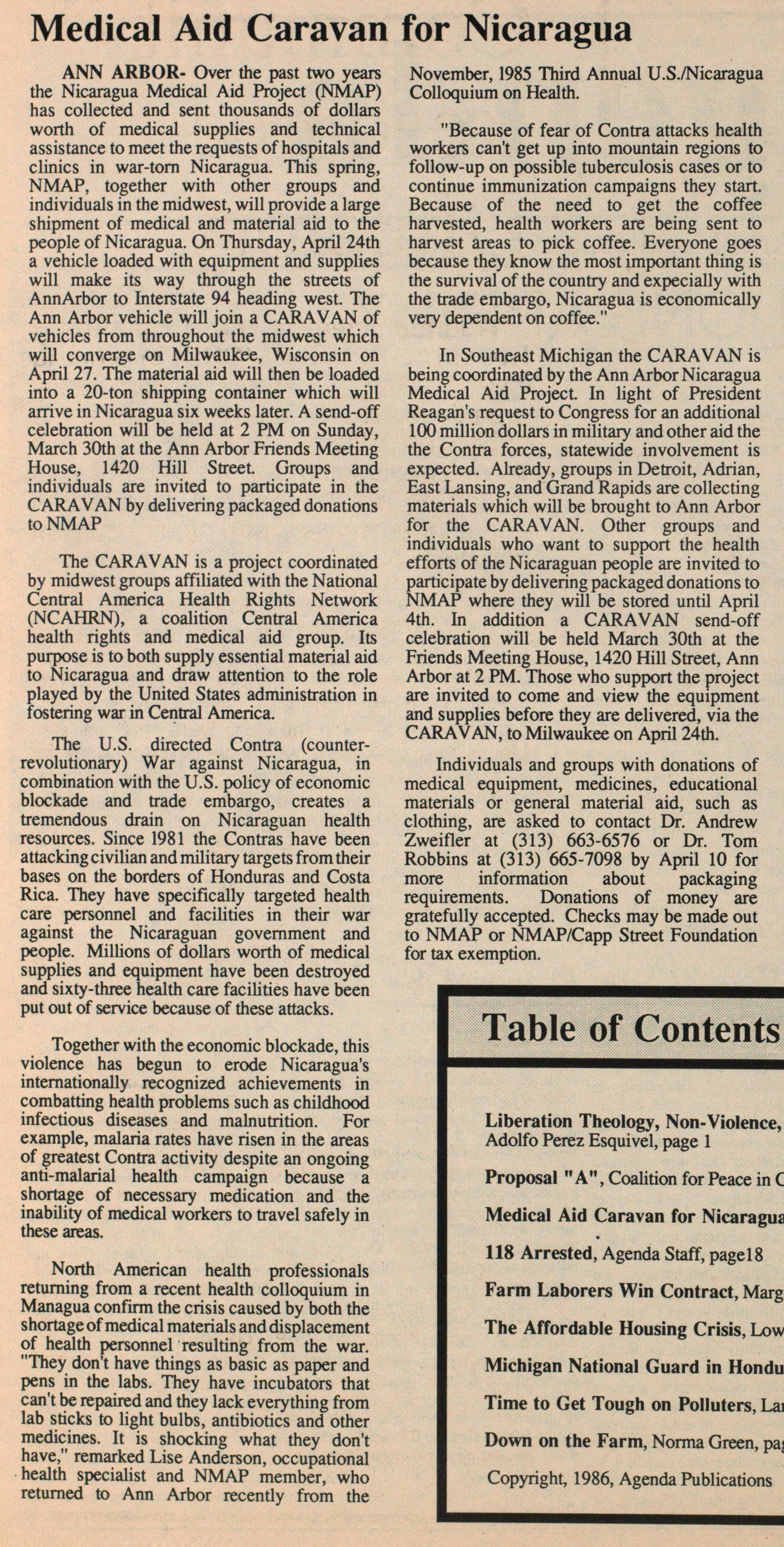 ANN Over the past two years the Nicaragua Medical Aid Project (NMAP) has collected and sent thousands of dollars worth of medical supplies and technical assistance to meet the requests of hospitals and clinics in war-torn Nicaragua. This spring, NMAP, together with other groups and individuals in the midwest, will provide a large shipment of medical and material aid to the people of Nicaragua. On Thursday, April 24th a vehicle loaded with equipment and supplies will make its way through the streets of AnnArbor to Interstate 94 heading west. The Ann Arbor vehicle will join a CARAVAN of vehicles from throughout the midwest which will converge on Milwaukee, Wisconsin on April 27. The material aid will then be loaded into a 20-ton shipping container which will arrive in Nicaragua six weeks later. A send-off celebration will be held at 2 PM on Sunday, March 3Oth at the Ann Arbor Friends Meeting House, 1420 Hill Street. Groups and individuáis are invited to particípate in the CARAVAN by delivering packaged donations toNMAP The CARAVAN is a project coordinated by midwest groups affiliated with the National Central America Health Rights Network (NCAHRN), a coalition Central America health rights and medical aid group. lts purpose is to both supply essential material aid to Nicaragua and draw attention to the role played by the United States administration in fostering war in Central America. The U.S. directed Contra (counterrevolutionary) War against Nicaragua, in combination with the U.S. policy of economie blockade and trade embargo, creates a tremendous drain on Nicaraguan health resources. Since 1981 the Contras have been attacking civilian and military targets from their bases on the borders of Honduras and Costa Rica. They have specifically targeted health care personnel and facilities in their war against the Nicaraguan government and people. Millions of dollars worth of medical supplies and equipment have been destroyed and sixty-three health care facilities have been put out of service because of these attacks. Together with the economie blockade, this yiolence has begun to erode Nicaragua's internationally recognized achievements in combatting health problems such as childhood infectious diseases and malnutrition. For example, malaria rates have risen in the areas of greatest Contra activity despite an ongoing anti-malarial health campaign because a shortage of necessary medication and the inability of medical workers to travel safely in these areas. North American health professionals returning from a recent health colloquium in Managua confirm the crisis caused by both the shortage of medical materials and displacement of health personnel resulting from the war. "They don't have things as basic as paper and pens in the labs. They have incubators that can't be repaired and they lack everything from lab sticks to light bulbs, antibiotics and other medicines. It is shocking what they don't have," remarked Lise Anderson, occupational health specialist and NMAP member, who returned to Ann Arbor recently from the November, 1985 Third Annual U.S.Nicaragua Colloquium on Health. "Because of fear of Contra attacks health workers can't get up into mountain regions to follow-up on possible tuberculosis cases or to continue immunization campaigns they start. Because of the need to get the coffee harvested, health workers are being sent to harvest areas to piek coffee. Everyone goes because they know the most important thing is the survival of the country and expecially with the trade embargo, Nicaragua is economically very dependent on coffee." In Southeast Michigan the CARAVAN is being coordinated by the Ann Arbor Nicaragua Medical Aid Project. In light of President Reagan's request to Congress for an additional 100 million dollars in military and other aid the the Contra forces, statewide involvement is expected. Already, groups in Detroit, Adrián, East Lansing, and Grand Rapids are collecting materials which will be brought to Ann Arbor for the CARAVAN. Other groups and individuals who want to support the health efforts of the Nicaraguan people are invited to particípate by delivering packaged donations to NMAP where they will be stored until April 4th. In addition a CARAVAN send-off celebration will be held March 30th at the Friends Meeting House, 1420 Hill Street, Ann Arbor at 2 PM. Those who support the project are invited to come and view the equipment and supplies before they are delivered, via the CARAVAN, to Milwaukee on April 24th. Individuals and groups with donations of medical equipment, medicines, educational materials or general material aid, such as clothing, are asked to contact Dr. Andrew Zweifler at (313) 663-6576 or Dr. Torn Robbins at (313) 665-7098 by April 10 for more information about packaging requirements. Donations of money are gratefully accepted. Checks may be made out to NMAP or NMAPCapp Street Foundation for tax exemption.