Industrial Workers Of The World 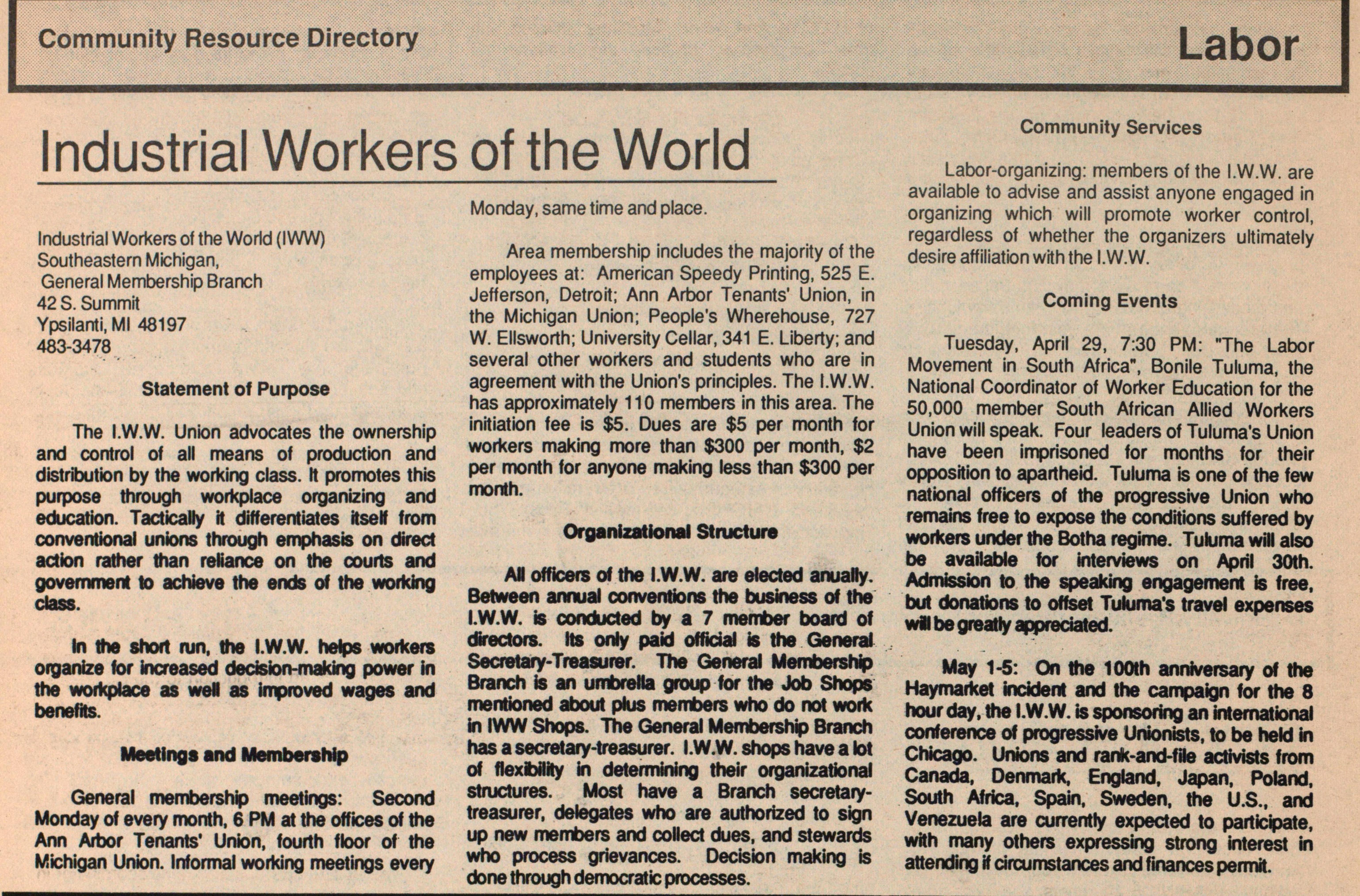 Community Resource Directory dbOT Industrial Workers of the World (IWW) Southeastern Michigan, General Membership Branch 42 S. Summit Ypsilanti, Ml 48197 483-3478 Statement of Purpose The I.W.W. Union advocates the ownership and control of all means of production and distribution by the working class. It promotes this purpose through workplace organizing and education. Tactically it differentiates itself from conventjonal unions through emphasis on direct action rather than reliance on the courts and govemment to achieve the ends of the working dass. In the snort run, the I.W.W. helos workers organizo lor increased decision-making power in the workplace as wel as improved wages and benefits. Meetings and Membership General membership meetings: Second Monday of every month, 6 PM at the offices of the Ann Arbor Tenants' Union, fourth floor of the Michigan Union. Informal working meetings every Monday, same time and place. Área membership ncludes the majority of the employees at: American Speedy Printing, 525 E. Jefferson, Detroit; Ann Arbor Tenants' Union, in the Michigan Union; People's Wherehouse, 727 W. Ellsworth; University Cellar, 341 E. Liberty; and several other workers and students who are in agreement with the Union's principies. The I.W.W. has approximately 110 members in this área. The nitiation fee is $5. Oues are $5 per month for workers making more than $300 per month, $2 per month for anyone making less than $300 per month. Organizational Structure Al offfcers of the I.W.W. are elected anually. Between annual conventions the business of the I.W.W. ís oonducted by a 7 member board of directora, lts only paid official is the General Secretary-Treasurer. The General Membership Branch is an umbrella group for the Job Shops mentioned about plus members who do not work in IWW Shops. The General Membership Branch has a secretary-treasurer. I.W.W. shops have a lot of flexbjlity in determining their organizational structures. Most have a Branch secretarytreasurer, deiegates who are authorized to sign up new members and collect dues, and stewards who process grievances. Decisión making is done through democratie processes. Community Services Labor-organizing: members of the I.W.W. are available to advise and assist anyone engaged n organizing which will promote worker control, regardless of whether the organizers ultimately desire affiüation with the I.W.W. Coming Events Tuesday, April 29, 7:30 PM: "The Labor Movement in South África", Bonile Tuluma, the National Coördinator of Worker Education for the 50,000 member South African Allied Workers Union will speak. Four leaders of Tuluma's Union have been imprisoned for months for their opposition to apartheid. Tuluma is one of the few national officers of the progressive Union who remains free to exposé the conditions suffered by workers under the Botha regime. Tuluma wil also be availaWe for interviews on April 30th. Admission to the speaking engagement is free, but donations to offset Tuluma's travel expenses wil be greatly appreciated. May 1-5: On the lOOth anniversary of the Haymarket incident and the campaign for the 8 hour day, the I.W.W. is sponsoring an international conference of progressive Unionists, to be held in Chicago. Unions and rank-and-f ile activists f rom Canada, Denmark, England, Japan, Poland, South África, Spain, Sweden, the U.S., and Venezuela are currently expected to particípate, with many others expressing strong interest in attending if circumstances and f nances perrrÉ.