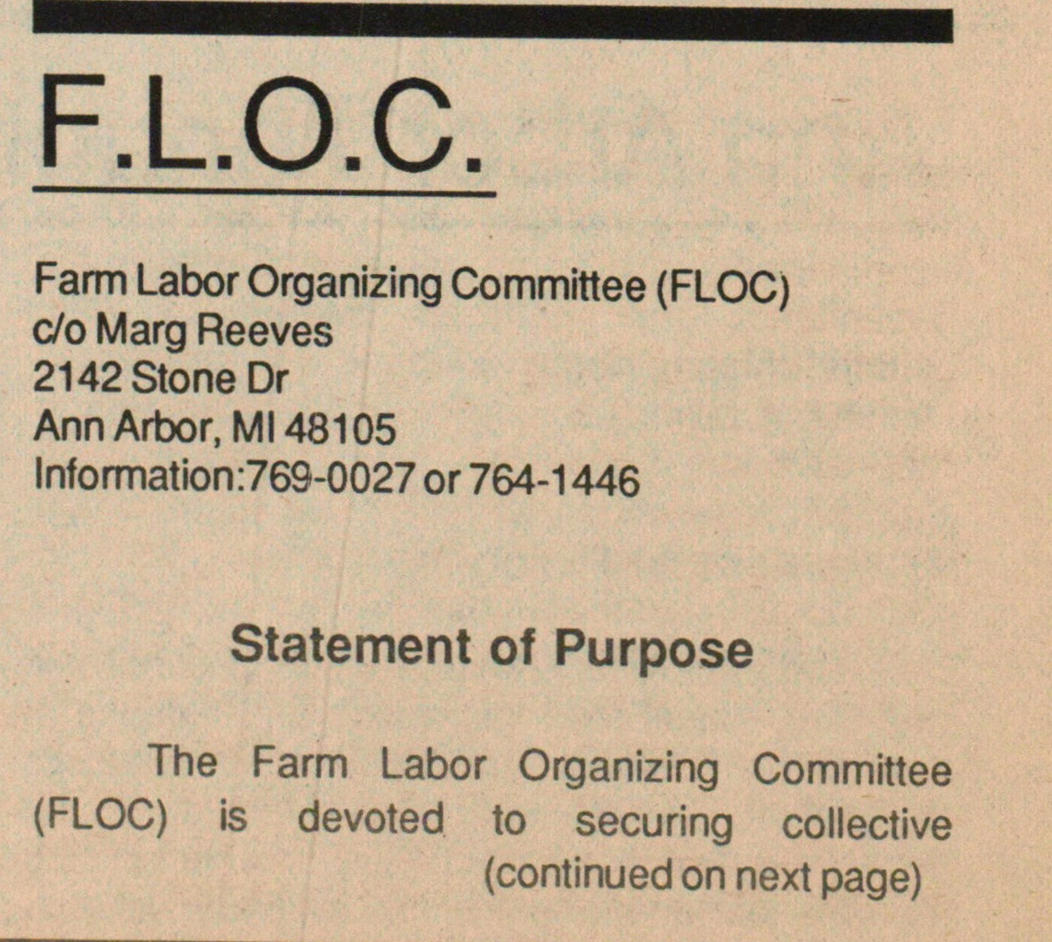 Farm Labor Organizing Committee (FLOC) co Marg Reeves 2142StoneDr AnnArbor, Ml 48105 lnformation:769-0027 or 764-1 446 Statement of Purpose The Farm Labor Organizing Committee (FLOC) is devoted to securing collective (continued on next page) bargaining agreements between the Campbell Soup Company, the migrant farmworkers of the Midwest, and the growers. FLOC has just recently (February 21, I986) suspended a seven year oíd boycott of Campbell's producís on the condition that Campbell's continúes improving the deplorable working conditions of the Midwest's migrant farmworkers and facilitating unionization efforts. Meetings and Membership The Ann Arbor chapter of FLOC meets every Tuesday at 5:45 p.m. in Room 4318 of the Michigan Union. Meetings usually last about one hour. There are currently seven active members of FLOC in Ann Arbor. Most are affiliated wKh other progressive political organizations on campus. Community Services FLOC holds numerous benefits and bake sales, donating all proceeds to FLOC's headquarters in Toledo, Ohio. In addition, the organization seeks to inform citizens about the plight of the migrant farmworkers. Current News The big news from FLOC is the announced suspension of the Campbell's boycott, following the signing of unprecedented collective bargaining agreements giving farmworkers a voice overtheir own affairs. Yes, all you ardent supporters of the boycott can now indulge in Campbell's soup, V-8 juice, Prego spagetti sauce, ad infinitum. However, FLOC remains concerned with the future of collective bargaining agreements. The fight has just begun; the recently signed agreements cover only 600 workers in Ohio and Michigan. FLOC shall continue to press for unionization and a recognition of all workers1 basic rights, and , if for any reason Campbell's reneges on its pledge, the boycott wil be reinstated. FLOC's next goal is to sign up more of the nearly 1 million agricultural workers in the U.S.