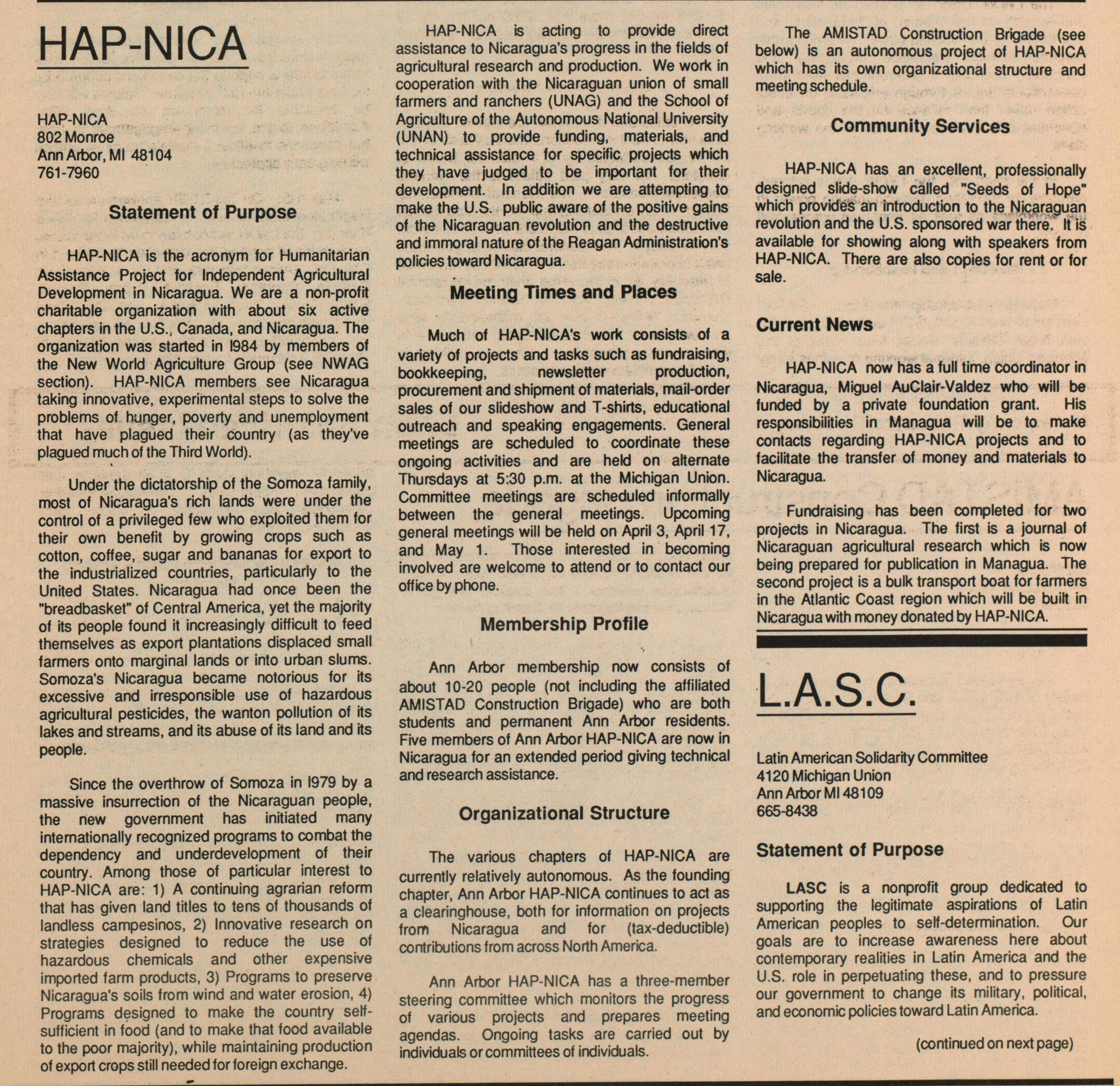 HAP-NICA 802 Monroe Ann Altor, MI 48104 761-7960 Statement of Purpose HAP-NICA is the acronym for Humanitarian Assistance Project for Independent Agricultural Development in Nicaragua. We are a non-profit charitable organizaron with about six active chapters in the U.S., Canada, and Nicaragua. The organization was started in I984 by members of the New World Agriculture Group (see NWAG section). HAP-NICA members see Nicaragua taking innovative, experimental steps to solve the problems of hunger, poverty and unemployment that have plagued their country (as they've plagued much of the Third World). Under the dictatorship of the Somoza family, most of Nicaragua's rich lands were under the control of a privileged few who explo'rted them for their own benefit by growing crops such as cotton, coffee, sugar and bananas for export to the industrialized countries, particularly to the United States. Nicaragua had once been the "breadbasket" of Central America, yet the majority of its people found it increasingly difficult to feed themselves as export plantations displaced small farmers onto marginal lands or into urban slums. Somoza's Nicaragua became notorious for its excessive and irresponsible use of hazardous agricultural pesticides, the wanton pollution of its lakes and streams, and its abuse of its land and its people. Since the overthrow of Somoza in I979 by a massive insurrection of the Nicaraguan people, the new government has inrtiated many intemationally recognized programs to combat the dependency and underdevelopment of their country. Among those of particular interest to HAP-NICA are: 1) A continuing agrarian reform that has given land titles to tens of thousands of landless campesinos, 2) Innovative research on strategies designed to reduce the use of hazardous Chemicals and other expensive mported farm producís, 3) Programs to preserve Nicaragua's soils from wind and water erosión, 4) Programs designed to make the country selfsufficient in food (and to make that food available to the poor majority), while maintaining production of export crops still needed for foreign exchange. HAP-NICA is acting to provkJe direct assistance to Nicaragua's progress in the fields of agricultural research and production. We work in cooperation with the Nicaraguan union of small farmers and ranchers (UNAG) and the School of Agricultura of the Autonomous National University (UNAN) to provide funding, materials, and technical assistance for specific projects which they have judged to be important for their development. In addition we are attempting to make the U.S. public aware of the positive gains of the Nicaraguan revolution and the destructive and immorai nature of the Reagan Administration's policies toward Nicaragua. Meeting Times and Places Much of HAP-NICA's work consists of a variety of projects and tasks such as fundraising, bookkeeping, newsletter production, procurement and shipment of materials, mail-order sales of our slideshow and T-shirts, educational outreach and speaking engagements. General meetings are scheduled to coordínate these ongoing activities and are held on altérnate Thursdays at 5:30 p.m. at the Michigan Union. Committee meetings are scheduled informally between the general meetings. Upcoming general meetings will be held on April 3, April 17, and May 1. Those interested in becoming involved are welcome to attend or to contact our office by phone. Membership Profile Ann Arbor membership now consists of about 10-20 people (not including the affiliated AMISTAD Construction Brigade) who are both students and permanent Ann Arbor residents. Five members of Ann Arbor HAP-NICA are now in Nicaragua for an extended period giving technical and research assistance. Organizational Structure The various chapters of HAP-NICA are currently relatively autonomous. As the founding chapter, Ann Arbor HAP-NICA continúes to act as a clearinghouse, both for information on projects from Nicaragua and for (tax-deductible) corrtributions from across North America. Ann Arbor HAP-NICA has a three-member steering committee which monitors the progress of various projects and prepares meeting agendas. Ongoing tasks are carried out by individuals orcommittees of individuáis. The AMISTAD Construction Brigade (see below) is an autonomous project of HAP-NICA which has its own organizational structure and meeting schedule. Community Services HAP-NICA has an excellent, professionally designed slide-show called "Seeds of Hope" which provides an introduction to the Nicaraguan revolution and the U.S. sponsored war there. It is available for showing along with speakers from HAP-NICA. There are also copies for rent or for sale. Current News HAP-NICA now has a full time coördinator in Nicaragua, Miguel AuClair-Valdez who will be funded by a private foundation grant. His responsibilities in Managua will be to make contacts regarding HAP-NICA projects and to facilítate the transfer of money and materials to Nicaragua. Fundraising has been completed for two projects in Nicaragua. The first is a journal of Nicaraguan agricultural research which is now being prepared for publication in Managua. The second project is a bulk transport boat for farmers in the Atlantic Coast región which will be built in Nicaragua with money donated by HAP-NICA.