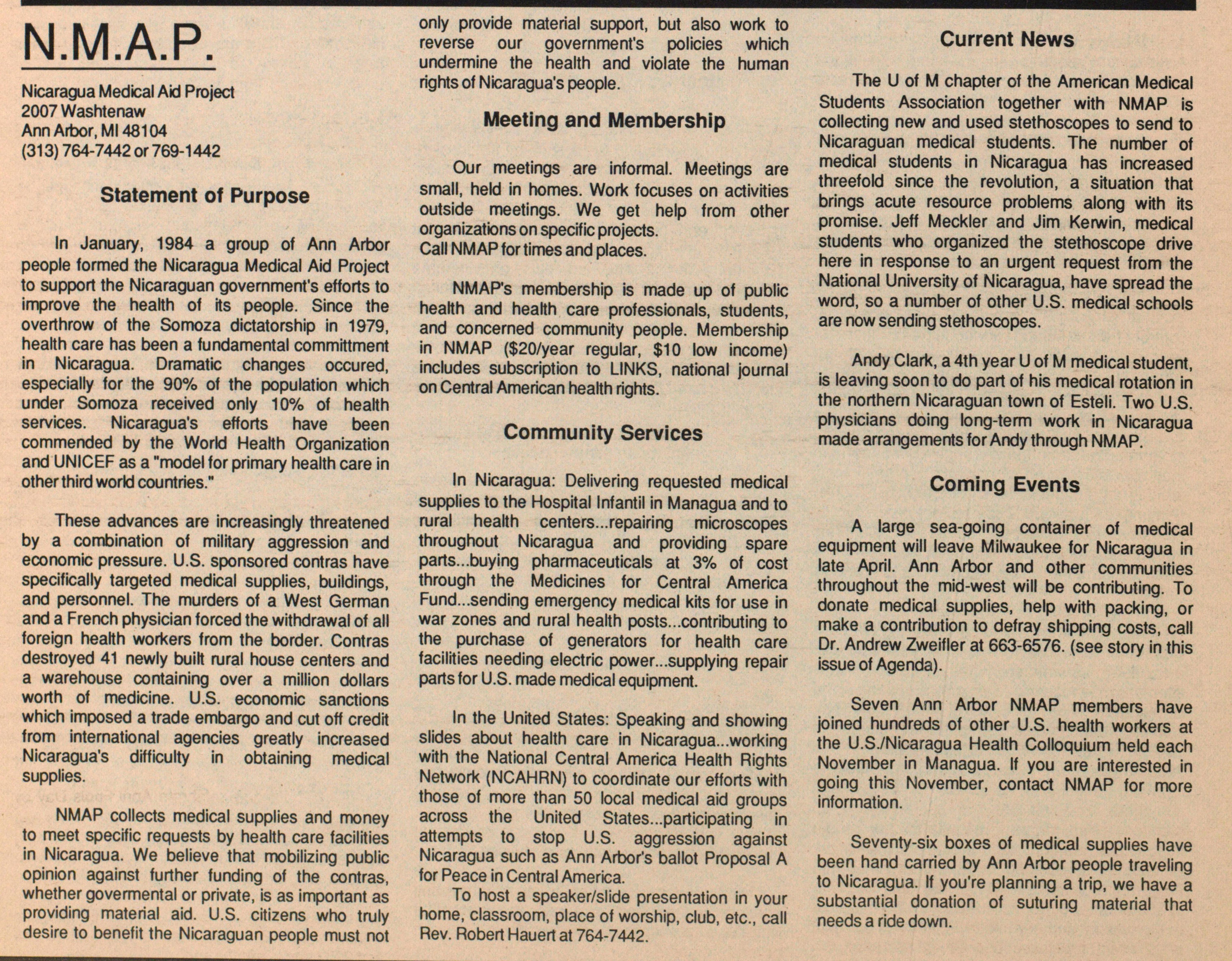 Nicaragua Medical Aid Project 2007 Washtenaw AnnArbor, MI 48104 (313) 764-7442 or 769-1442 Statement of Pur pose In January, 1984 a group of Ann Arbor people (ormed the Nicaragua Medical Aid Project to support the Nicaraguan government's efforts to improve the health of its people. Since the overthrow of the Somoza dictatorship in 1979, health care has been a fundamental committment in Nicaragua. Dramatic changes occured, especially for the 90% of the population which under Somoza received only 10% of health services. Nicaragua's efforts have been commended by the World Health Organization and UNICEF as a "model for primary health care in otherthird world countries." These advances are increasingly threatened by a combination of military aggression and economie pressure. U.S. sponsored contras have specifically targeted medical supplies, buildings, and personnel. The murders of a West Germán and a French physician forced the withdrawal of all foreign health workers from the border. Contras destroyed 41 newly built rural house centers and a warehouse containing over a million dollars worth of medicine. U.S. economie sanctions which imposed a trade embargo and cut off credit from international agencies greatly increased Nicaragua's difficulty in obtaining medical supplies. NMAP collects medical supplies and money to meet specific requests by health care facilities in Nicaragua. We believe that mobilizing public opinión against further funding of the contras, whether govermental or private, is as important as providing material aid. U.S. citizens who truly desire to benefit the Nicaraguan people must not only provide material support, but also work to reverse our government's policies which undermine the health and viólate the human rights of Nicaragua's people. Meeting and Membership Our meetings are informal. Meetings are small, held in homes. Work focuses on activities outside meetings. We get help from other organizations on specif ie projects. Cali NM AP for times and places. NMAP's membership is made up of public health and health care professionals, students, and concerned community people. Membership in NMAP ($20year regular, $10 low income) includes subscription to LINKS, national journal on Central American health rights. Community Services In Nicaragua: Delivering requested medical supplies to the Hospital Infantil in Managua and to rural health centers. ..repairing microscopes throughout Nicaragua and providing spare parts...buying pharmaceuticals at 3% of cost through the Medicines for Central America Fund...sending emergency medical kits for use in war zones and rural health posts...contributing to the purchase of generators for health care facilrties needing electric power... supplying repair parts for U.S. made medical equipment. In the United States: Speaking and showing slides about health care in Nicaragua. ..working with the National Central America Health Rights Network (NCAHRN) to coordínate our efforts with those of more than 50 local medical aid groups across the United States.. .participating in attempts to stop U.S. aggression against Nicaragua such as Ann Arbor's ballot Proposal A for Peace in Central America. To host a speakerslide presentation in your home, classroom, place of worship, club, etc., cali Rev. Robert Hauert at 764-7442. Current News The U of M chapter of the American Medical Students Association together with NMAP is collecting new and used stethoscopes to send to Nicaraguan medical students. The number of medical students in Nicaragua has increased threefold since the revolution, a situation that brings acute resource problems along with its promise. Jeff Meckler and Jim Kerwin, medical students who organized the stethoscope drive here in response to an urgent request from the National University of Nicaragua, have spread the word, so a number of other U.S. medical schools are now sending stethoscopes. Andy Clark, a 4th year U of M medical student, is leaving soon to do part of his medical rotation in the northern Nicaraguan town of Esteli. Two U.S. physicians doing long-term work in Nicaragua made arrangements for Andy through NMAP. Coming Events A large sea-going container of medical equipment will leave Milwaukee for Nicaragua in late April. Ann Arbor and other communities throughout the mid-west will be contributing. To dónate medical supplies, help with packing, or make a contribution to defray shipping costs, cali Dr. Andrew Zweifler at 663-6576. (see story in this issue of Agenda). Seven Ann Arbor NMAP members have joined hundreds of other U.S. health workers at the U.SVNicaragua Health Colloquium held each November in Managua. If you are interested in going this November, contact NMAP for more information. Seventy-six boxes of medical supplies have been hand carried by Ann Arbor people traveling to Nicaragua. If you're planning a trip, we have a substantial donation of suturing material that needs a ride down.