Campuses Against Weapons In Space (C.A.W.S.) 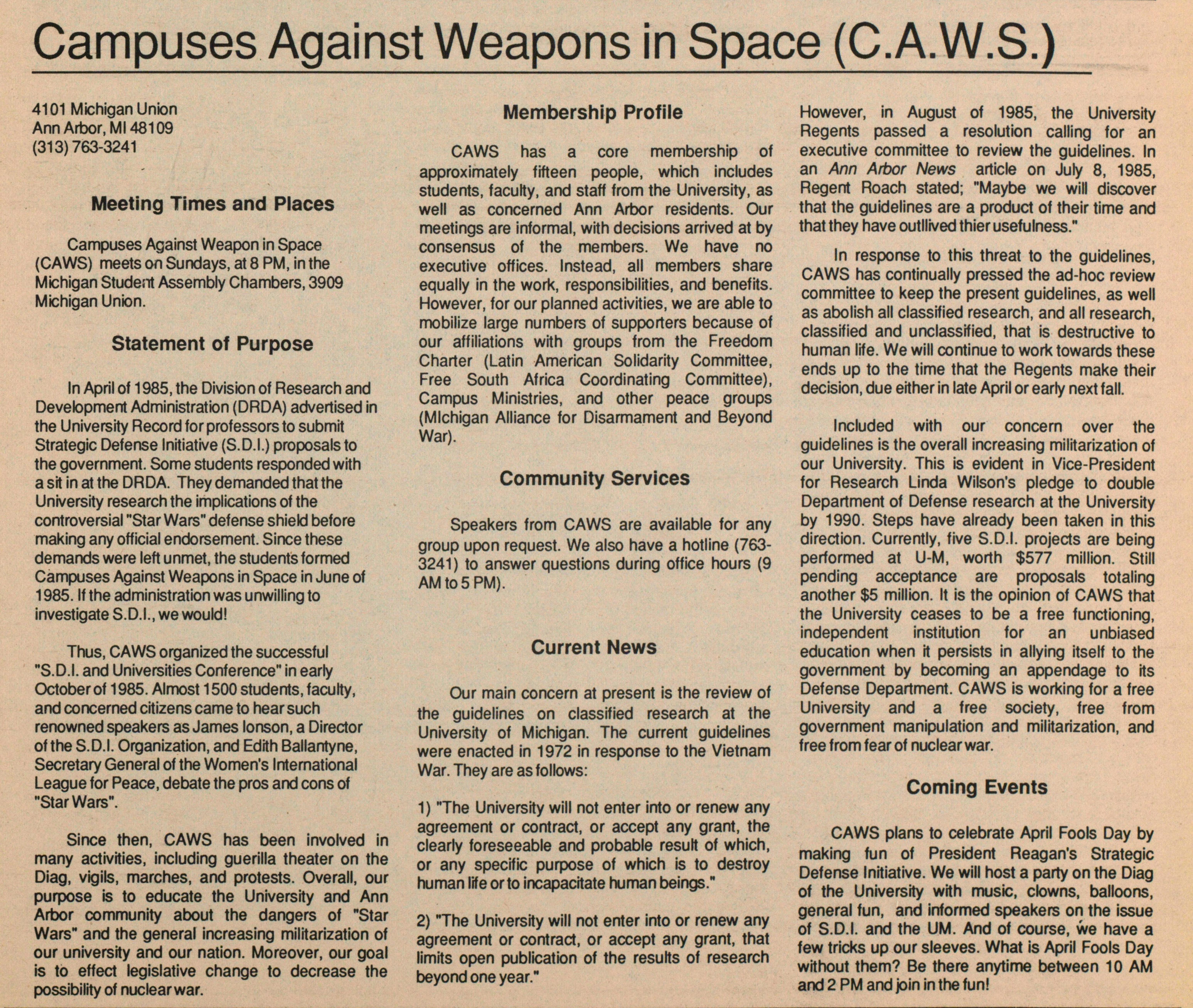 4101 Michigan Union AnnArbor,MI48109 (313)763-3241 Meeting Times and Places Campuses Against Weapon in Space (CAWS) meets on Sundays, at 8 PM, in the Michigan Stude.'Tt Assembly Chambers, 3909 Michigan Union. Statement of Purpose In April of 1 985, the División of Research and Development Administration (DRDA) advertised in the University Record for professors to submit Strategie Defense Initiative (S.D.I.) proposalsto the government. Some students responded with a sit in at the DRDA. They demanded that the University research the implications of the controversial "Star Wars" defense shiekJ before making any official endorsement. Since these demands were left unmet, the students formed Campuses Against Weapons in Space in June of 1 985. If the administration was unwilling to investígate S.D.I. , we would! Thus, CAWS organized the successful "S.D.I. and Universities Conference" in early Octoberof 1985. Almost 1500 students, faculty, and concerned citizens carne to hear such renowned speakers as James lonson, a Director of the S.D.I. Organization, and Edith Ballantyne, Secretary General of the Women's International League for Peace, debate the pros and cons of "Star Wars". Since then, CAWS has been involved in many activities, including guerilla theater on the Diag, vigils, marches, and protests. Overall, our purpose is to edúcate the University and Ann Arbor community about the dangers of "Star Wars" and the general increasing militarization of our university and our nation. Moreover, our goal is to effect legislative change to decrease the possibility of nuclear war. Membership Profile CAWS has a core membership of approximately fifteen people, which includes students, faculty, and staff from the University, as well as concerned Ann Arbor residents. Our meetings are informal, with decisions arrived at by consensus of the members. We have no executive offices. Instead, all members share equally in the work, responsibilities, and benefits. However, for our planned activities, we are able to mobilize large numbers of supporters because of our affiliations with groups from the Freedom Charter (Latín American Solidarity Committee, Free South África Coordinating Committee), Campus Ministries, and other peace groups (Michigan Alliance for Disarmament and Beyond War). Community Services Speakers from CAWS are available for any group upon request. We also have a hotline (7633241) to answer questions during office hours (9 AMto5PM). Current News Our main concern at present is the review of the guidelines on classified research at the University of Michigan. The current guidelines were enacted in 1972 in response to the Vietnam War. They are as follows: 1) "The University will not enter nto or renew any agreement or contract, or accept any grant, the clearly foreseeable and probable result of which, or any specific purpose of which is to destroy human life orto incapacítate human beings." 2) "The University will not enter into or renew any agreement or contract, or accept any grant, that limits open publication of the results of research beyond one year." However, in August of 1985, the University Regents passed a resolution calling for an executive committee to review the guidelines. In an Ann Atbor News article on July 8, 1985, Regent Roach stated; "Maybe we will discover that the guidelines are a product of their time and that they have outllived thierusefulness." In response to this threat to the guidelines, CAWS has continually pressed the ad-hoc review committee to keep the present guidelines, as well as abolish all classified research, and all research, classified and unclassified, that is destructive to human lif e. We will continue to work towards these ends up to the time that the Regents make their decisión, due either in late April or early next f all. Included with our concern over the guidelines s the overall increasing militarization of our University. This is evident in President for Research Linda Wilson's pledge to doublé Department of Defense research at the University by 1990. Steps have already been taken in this direction. Currently, five S.D.I. projects are being performed at U-M, worth $577 million. Still pending acceptance are proposals totaling another $5 million. It is the opinión of CAWS that the University ceases to be a free functioning, independent institution for an unbiased education when it persists in allying itself to the government by becoming an appendage to its Defense Department. CAWS is working for a free University and a free society, free from government manipulation and militarization, and free from f ear of nuclear war. Coming Events CAWS plans to celébrate April Fools Day by making fun of President Reagan's Strategie Defense Inrtiative. We will host a party on the Diag of the University with music, clowns, balloons, general fun, and informed speakers on the issue of S.D.I. and the UM. And of course, we have a few tricks up our sleeves. What is April Fools Day without them? Be there anytime between 10 AM and 2 PM and join in the fun!