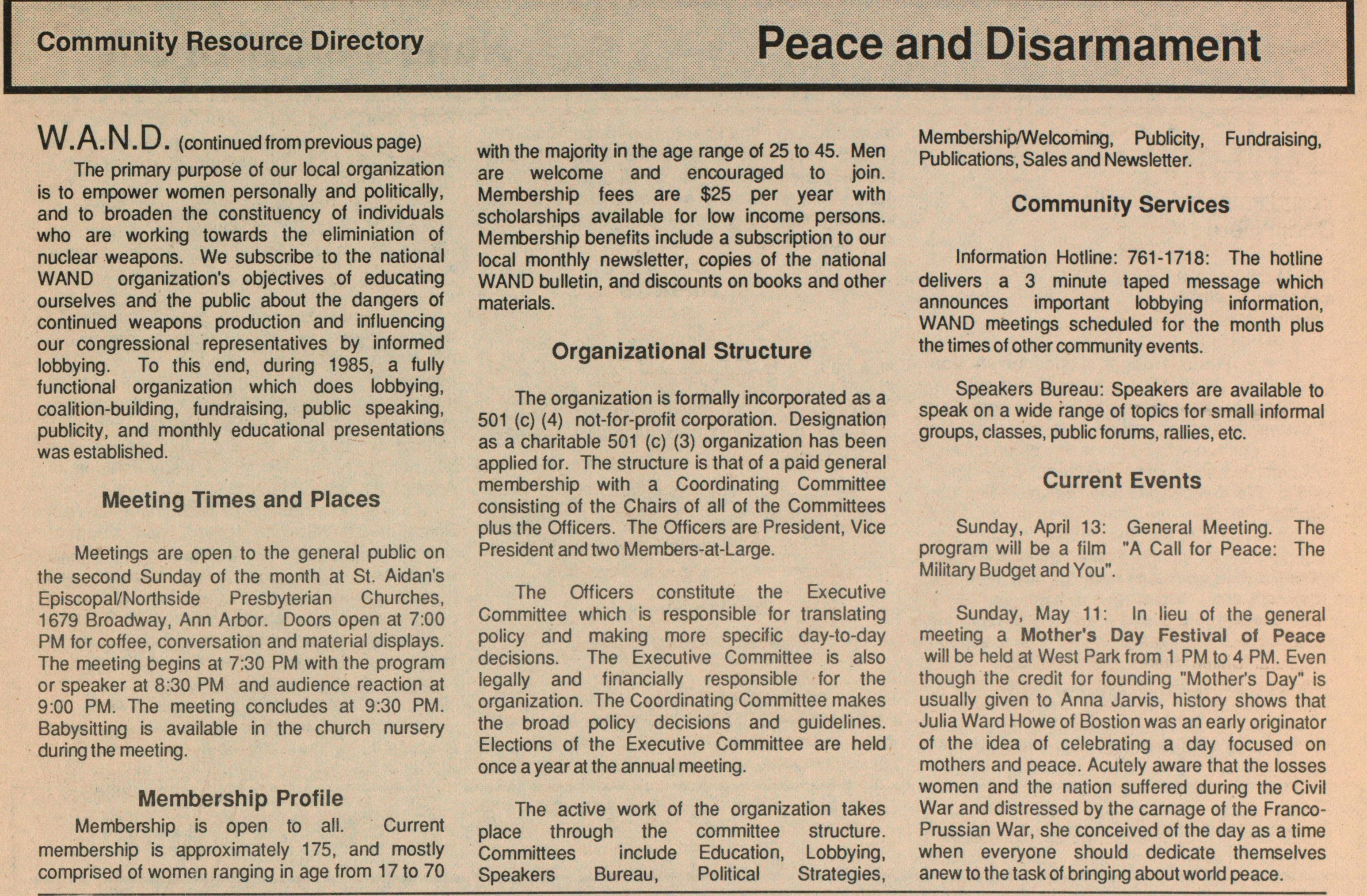 Washtenaw County Women's Action for Nuclear Disarmament, Inc. (WAND) P.O. Box 1815 AnnArbor.MI 48106-1815 (313)761-1718 Statement of Purpose Washtenaw County WAND was formed in December of 1984 by a core group of 12 individuáis and became an affiliate of the national WAND which was formed in 1980 by Dr. Helen Caldicott. (continued on next page) W. A. N . D . (continued from previous page) The primary purpose of our local organization is to empower women personally and politically, and to broaden the constituency of individuáis who are working towards the eliminiation of nuclear weapons. We subscribe to the national WAND organization's objectives of educating ourselves and the public about the dangers of continued weapons production and influencing our congressional representaties by nformed lobbying. To this end, during 1985, a fully functional organization which does lobbying, coalition-building, fundraising, public speaking, publicity, and monthly educational presentations was established. Meeting Times and Places Meetings are open to the general public on the second Sunday of the month at St. Aidan's EpiscopalNorthside Presbyterian Churches, 1 679 Broadway, Ann Arbor. Doors open at 7:00 PM for coffee, conversation and material displays. The meeting begins at 7:30 PM with the program or speaker at 8:30 PM and audience reaction at 9:00 PM. The meeting concludes at 9:30 PM. Babysitting is available in the church nursery during the meeting. Membership Profile Membership is open to all. Current membership is approximately 175, and mostly comprised of women ranging in age from 1 7 to 70 with the majority n the age range of 25 to 45. Men are welcome and encouraged to join. Membership fees are $25 per year with scholarships available for low income persons. Membership benefits include a subscription to our local monthly newsletter, copies of the national WAND bulletin, and discounts on books and other materials. Organizational Structure The organization is formally ncorporated as a 501 (c) (4) not-for-profit Corporation. Designation as a charitable 501 (c) (3) organization has been applied for. The structure is that of a paid general membership with a Coordinating Committee consisting of the Chairs of all of the Committees plus the Officers. The Officers are President, Vice President and two Members-at-Large. The Officers constitute the Executive Committee which is responsible for translating policy and making more specific day-to-day decisions. The Executive Committee is also legally and financially responsible for the organization. The Coordinating Committee makes the braad policy decisions and guidelines. Elections of the Executive Committee are held once a year at the annual meeting. The active work of the organization takes place through the committee structure. Committees include Education, Lobbying, Speakers Bureau, Political Strategies, MembershipWelcoming, Publicity, Fundraising, Publications, Sales and Newsletter. Community Services Information Hotline: 761-1718: The hotline delivers a 3 minute taped message which announces important lobbying information, WAND meetings scheduled for the month plus the times of other community events. Speakers Bureau: Speakers are available to speak on a wide range of topics for small informal groups, classes, public forums, rallies, etc. Current Events Sunday, April 13: General Meeting. The program will be a film "A Cali for Peace: The Military Budget and You". Sunday, May 11: In lieu of the general meeting a Mother's Day Festival of Peace will be held at West Park f rom 1 PM to 4 PM. Even though the credit for founding "Mother's Day" is usually given to Anna Jarvis, history shows that Julia Ward Howe of Bostion was an early originator of the idea of celebrating a day focused on mothers and peace. Acutely aware that the losses women and the nation suffered during the Civil War and distressed by the carnage of the FrancoPrussian War, she conceived of the day as a time when everyone should dedícate themselves anew to the task of bringing about wortd peace. community Resource Directory Peace and Disarmament