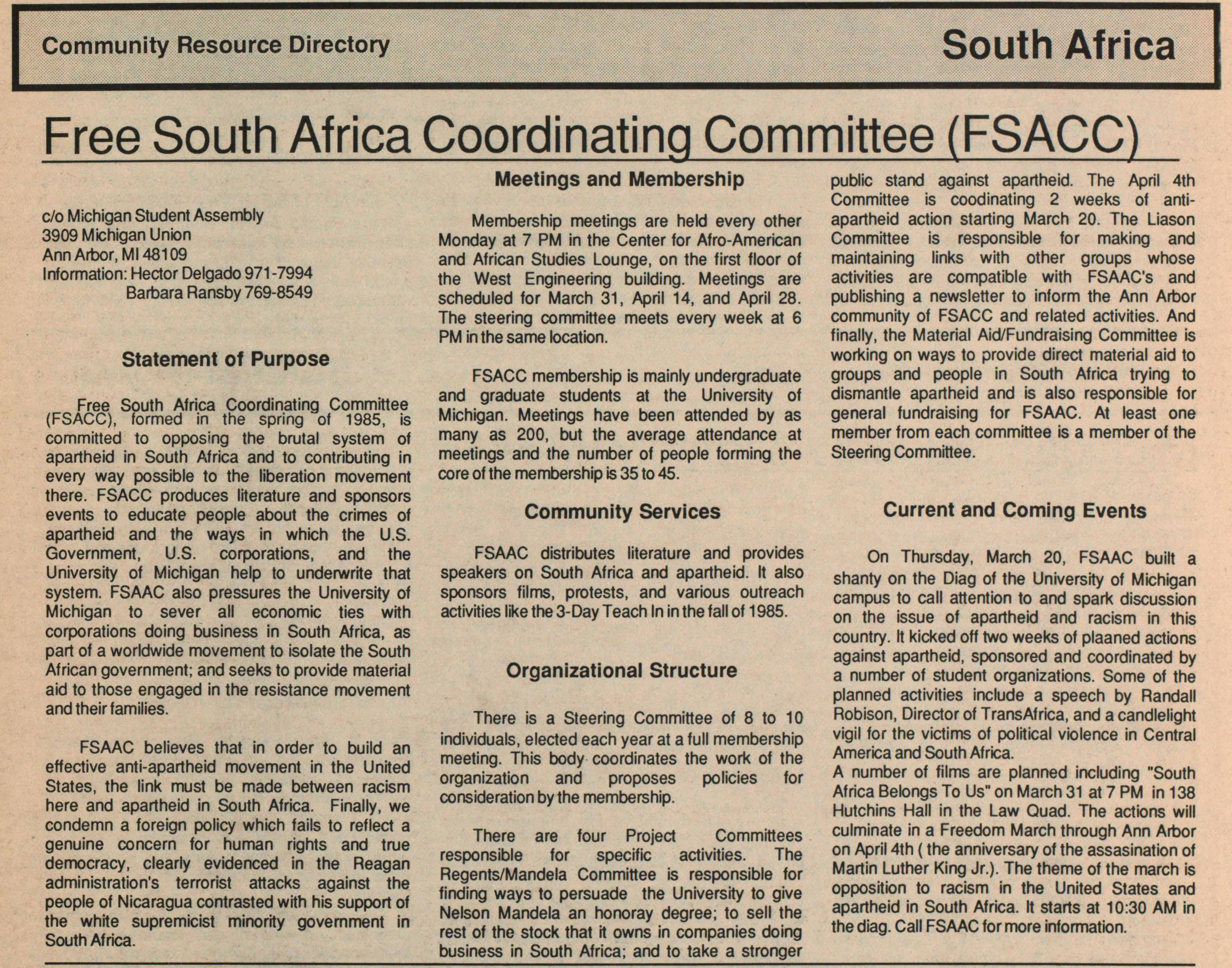 Community Resource Directory SOUth Af NC3 co Michigan Student Assembly 3909 Michigan Union Ann Arbor, Ml 48109 Information: Hedor Delgado 971 -7994 Barbara Ransby 769-8549 Statement of Purpose Free South Afripa Coordinating Committee (FSACC), formed in the spring of 1985, is committed to opposing the brutal system of apartheid in South África and to contributing in every way possible to the liberation movement there. FSACC produces literature and sponsors events to edúcate people about the crimes of apartheid and the ways in which the U.S. Government, U.S. corporations, and the University of Michigan help to underwrite that system. FSAAC also pressures the University of Michigan to sever all economie ties with corporations doing business in South África, as part of a worldwide movement to isolate the South African government; and seeks to provide material aid to those engaged in the resistance movement and their families. FSAAC believes that in order to build an effective anti-apartheid movement in the United States, the link must be made between racism here and apartheid in South África. Finally, we condemn a foreign policy which fails to reflect a genuine concern for human rights and true democracy, clearly evidenced in the Reagan administration's terrorist attacks against the people of Nicaragua contrasted with his support of the white supremicist minority govemment in South África. Meetings and Membership Membership meetings are held every other Monday at 7 PM in the Center for Afro-American and African Studies Lounge, on the first floor of the West Engineering building. Meetings are scheduled for March 31, April 14, and April 28. The steering committee meets every week at 6 PM in the same location. FSACC membership is mainly undergraduate and gradúate students at the University of Michigan. Meetings have been attended by as many as 200, but the average attendance at meetings and the number of people forming the core of the membership is 35 to 45. Community Services FSAAC distributes literature and provides speakers on South África and apartheid. It also sponsors films, protests, and various outreach activities like the 3-Day Teach In in the f all of 1 985. Organizational Structure There is a Steering Committee of 8 to 10 individuals, elected each year at a full membership meeting. This body coordinates the work of the organization and proposes policies for consideration by the membership. There are four Project Committees responsible for specific activities. The RegentsMandela Committee is responsible for finding ways to persuade the University to give Nelson Mándela an honoray degree; to sell the rest of the stock that it owns in companies do ing business in South África; and to take a stronger public stand against apartheid. The April 4th Committee is coodinating 2 weeks of antiapartheid action starting Maren 20. The Liason Committee is responsible for making and maintaining links with other groups whose activities are compatible with FSAAC's and publishing a newsletter to inform the Ann Arbor community of FSACC and related activities. And finally, the Material AidFundraising Committee is working on ways to provide direct material aid to groups and people in South África trying to dismantle apartheid and is also responsible for general fundraising for FSAAC. At least one member f rom each committee is a member of the Steering Committee. Current and Coming Events On Thursday, March 20, FSAAC built a shanty on the Diag of the University of Michigan campus to cali attention to and spark discussion on the issue of apartheid and racism in this country. It kicked off two weeks of plaaned actions against apartheid, sponsored and coordinated by a number of student organizations. Some of the planned activities include a speech by Randall Robison, Director of TransAfrica, and a candlelight vigil for the victims of political violence in Central America and South África. A number of films are planned including "South África Betongs To Us" on March 31 at 7 PM in 138 Hutchins Hall in the Law Quad. The actions will culminate in a Freedom March through Ann Arbor on April 4th ( the anniversary of the assasination of Martin Luther King Jr.). The theme of the march is opposition to racism in the United States and apartheid in South África. It starts at 10:30 AM in the diag. Cali FSAAC for more information.