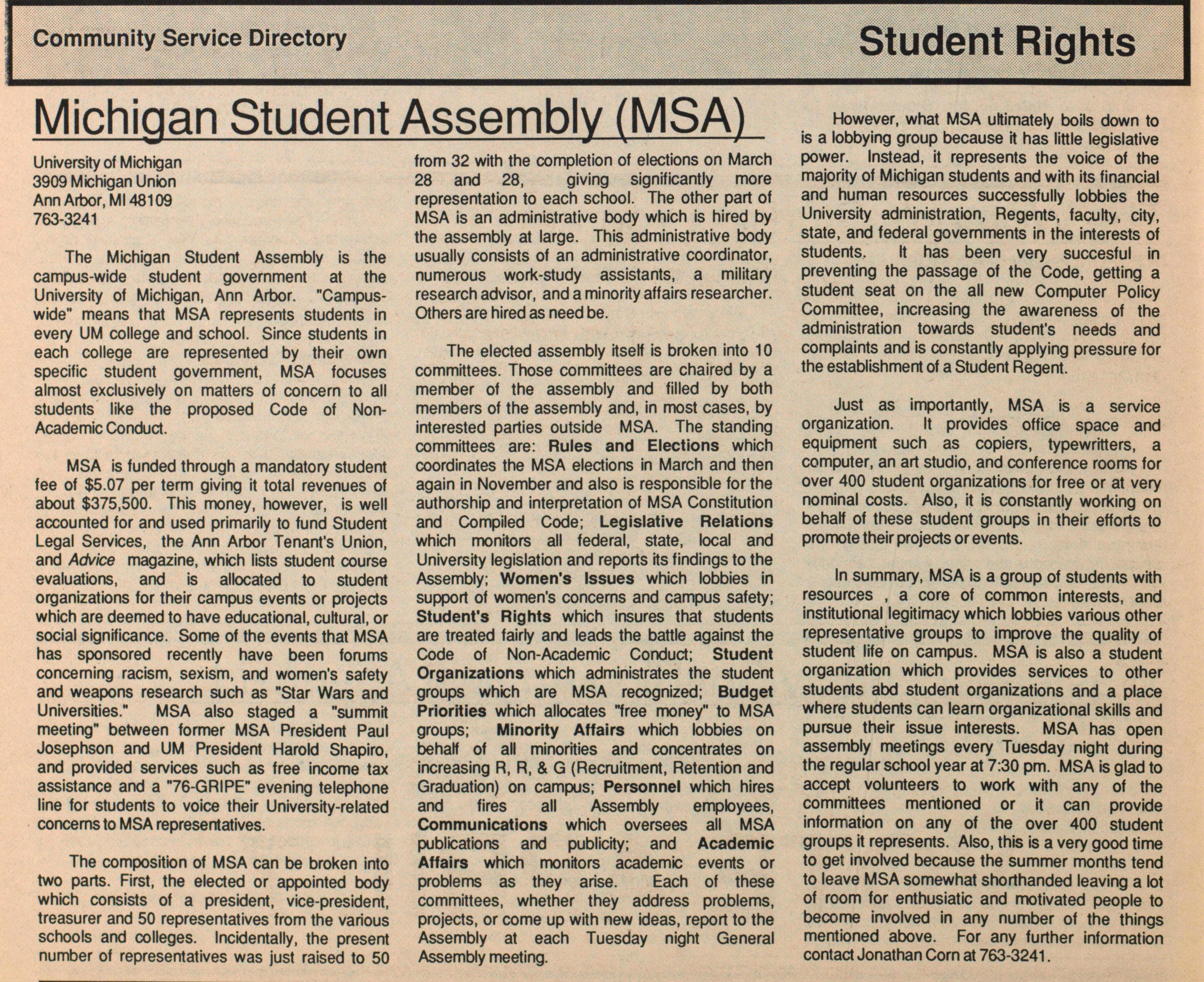 i ■ ■ ■ ■■■■■; ]v :%;:-■ '■■)- :;:: ■;.. ■ :: ■ ■ ■■:.-■ ;í;Íí Community Service Directory Student RightS University of Michigan 3909 Michigan Union Ann Altor, MI 481 09 763-3241 The Michigan Student Assernbly is the campus-wide student government at the University of Michigan, Ann Arbor. "Campuswide" means that MSA represents students in every UM college and school. Since students in each college are represented by their own specific student government, MSA focuses almost exclusively on matters of concern to all students like the proposed Code of NonAcademie Conduct. MSA is funded through a mandatory student fee of $5.07 per term giving it total revenues of about $375,500. This money, however, is well accounted for and used primarily to fund Student Legal Services, the Ann Arbor Tenant's Union, and Advice magazine, which lists student course evaluations, and is allocated to student organizations for their campus events or projects which are deemed to have educational, cultural, or social significance. Some of the events that MSA has sponsored recently have been forums conceming racism, sexism, and women's safety and weapons research such as "Star Wars and Universities." MSA also staged a "summit meeting" between former MSA President Paul Josephson and UM President Harold Shapiro, and provided services such as free income tax assistance and a "76-GRIPE" evening telephone line for students to voice their University-related concerns to MSA representatives. The composition of MSA can be braken into two parts. First, the elected or appointed body which consists of a president, vice-president, treasurer and 50 representatives from the various schools and colleges. InckJentally, the present number of representatives was just raised to 50 from 32 with the completion of elections on March 28 and 28, giving significantly more representaron to each school. The other part of MSA s an administrative body which is hired by the assembly at large. This administrative body usually consists of an administrative coördinator, numerous work-study assistants, a military research advisor, and a minority affairs researcher. Others are hired as need be. The elected assembly itself is braken into 10 committees. Those committees are chaired by a member of the assembly and filled by both members of the assembly and, in most cases, by interested parties outside MSA. The standing committees are: Rules and Elections which coordinates the MSA elections in March and then again in November and also is responsible for the authorship and interpretation of MSA Constitution and Compiled Code; Legislative Relations which monitors all federal, state, local and University legislation and reports its f indings to the Assembly; Women's Issues which lobbies in support of women's concerns and campus safety; Student's Rights which insures that students are treated fairly and leads the battle against the Code of Non-Academie Conduct; Student Organizations which administrates the student groups which are MSA recognized; Budget Priorities which allocates "free money" to MSA groups; Minority Affairs which lobbies on behalf of all minorities and concentrates on increasing R, R, & G (Recruitment, Retention and Graduation) on campus; Personnel which hires and fires all Assembly employees, Communications which oversees all MSA publications and publicity; and Academie Affairs which monitors academie events or problems as they arise. Each of these committees, whether they address problems, projects, or come up with new ideas, report to the Assembly at each Tuesday night General Assembly meeting. However, what MSA ultimately boils down to is a lobbying group because it has little legislative power. Instead, it represents the voice of the majority of Michigan students and with its financial and human resources successfully lobbies the University administration, Regents, faculty, city, state, and federal governments in the interests of students. It has been very succesful in preventing the passage of the Code, getting a student seat on the all new Computer Policy Committee, increasing the awareness of the administration towards student's needs and complaints and is constantly applying pressure for the establishment of a Student Regent. Just as importantly, MSA is a service organization. It provides office space and equipment such as copiers, typewrrtters, a computer, an art studio, and conference rooms for over 400 student organizations for free or at very nominal costs. Also, it is constantly working on behalf of these student groups in their efforts to promote their projects or events. In summary, MSA is a group of students with resources , a core of common interests, and institutional legitimacy which lobbies various other representative groups to improve the quality of student life on campus. MSA is also a student organization which provides services to other students abd student organizations and a place where students can learn organizational skills and pursue their issue interests. MSA has open assembly meetings every Tuesday night during the regular school year at 7:30 pm. MSA is glad to accept volunteers to work with any of the commïttees mentioned or it can provide information on any of the over 400 student groups it represents. Also, this is a very good time to get involved because the summer months tend to leave MSA somewhat shorthanded leaving a lot of room for enthusiatic and motivated people to become involved in any number of the things mentioned above. For any further information contact Jonathan Corn at 763-3241 .