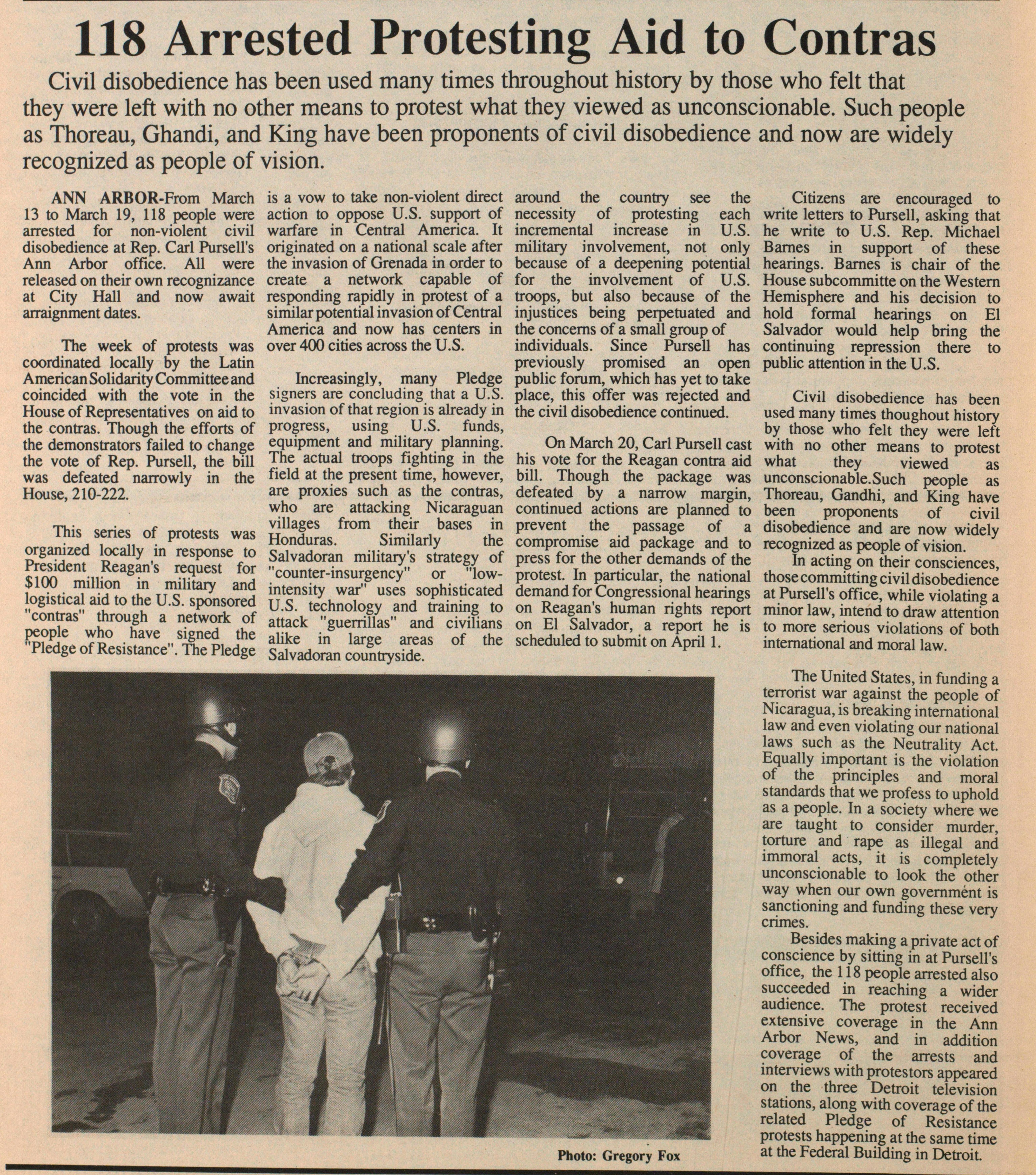 Civil disobedience has been used many times throughout history by those who felt that they were left with no other means to protest what they viewed as unconscionable. Such people as Thoreau, Ghandi, and King have been proponents of civil disobedience and now are widely recognized as people of visión. ANN ARBOR-From March 13 to March 19, 118 people were arrested for non-violent civil disobedience at Rep. Cari Pursell's Ann Arbor office. All were released on their own recognizance at City Hall and now await arraignment dates. The week of protests was coordinated locally by the Latín American Solidarity Committee and coincided with the vote in the House of Representatives on aid to the contras. Though the efforts of the demonstrators failed to change the vote of Rep. Pursell, the bill was defeated narrowly in the House, 210-222. This series of protests was organized locally in response to President Reagan's request for $100 million in military and logistical aid to the U.S. sponsored "contras" through a network of people who have signed the "Pledge of Resistance". The Pledge is a vow to take non-violent direct action to oppose U.S. support of warfare in Central America. It originated on a national scale after the invasión of Grenada in order to créate a network capable of responding rapidly in protest of a similar poten tial invasión of Central America and now has centers in over 400 cities across the U.S. Increasingly, many Pledge signers are concluding that a U.S. invasión of that región is already in progress, using U.S. funds, equipment and military planning. The actual troops fighting in the field at the present time, however, are proxies such as the contras, who are attacking Nicaraguan villages from their bases in Honduras. Similarly the Salvadoran military's strategy of "counter-insurgency" or "lowintensity war" uses sophisticated U.S. technology and training to attack "guerrillas" and civilians alike in large areas of the Salvadoran countryside. around the country see the necessity of protesting each incremental increase in U.S. military involvement, not only because of a deepening potential for the involvement of U.S. troops, but also because of the injustices being perpetuated and the concerns of a small group of individuals. Since Pursell has previously promised an open public forum, which has yet to take place, this offer was rejected and the civil disobedience continued. On March 20, Cari Pursell cast his vote for the Reagan contra aid bill. Though the package was defeated by a narrow margin, continued actions are planned to prevent the passage of a compromise aid package and to press for the other demands of the protest. In particular, the national demand for Congressional hearings on Reagan's human rights report on El Salvador, a report he is scheduled to submit on April 1. Citizens are encouraged to write letters to Pursell, asking that he write to U.S. Rep. Michael Barnes in support of these hearings. Barnes is chair of the House subcommitte on the Western Hemisphere and his decisión to hold formal hearings on El Salvador would help bring the continuing repression there to public attention in the U.S. Civil disobedience has been used many times thoughout history by those who feit they were left with no other means to protest what they viewed as unconscionable.Such people as Thoreau, Gandhi, and King have been proponents of civil disobedience and are now widely recognized as people of visión. In acting on their consciences, those committing civil disobedience at Pursell's office, while violating a minor law, intend to draw attention to more serious violations of both international and moral law. The United States, in funding a terrorist war against the people of Nicaragua, is breaking international law and even violating our national laws such as the Neutrality Act. Equally important is the violation of the principies and moral standards that we profess to uphold as a people. In a society where we are taught to consider murder, torture and rape as illegal and immoral acts, it is completely unconscionable to look the other way when our own governmènt is sanctioning and funding these very crimes. Besides making a private act of conscience by sitting in at Pursell's office, the 1 18 people arrested also succeeded in reaching a wider audience. The protest received extensive coverage in the Ann Arbor News, and in addition coverage of the arrests and interviews with protestors appeared on the three Detroit televisión stations, along with coverage of the related Pledge of Resistance protests happening at the same time at the Federal Building in Detroit.