Time To Get Tough On Polluters 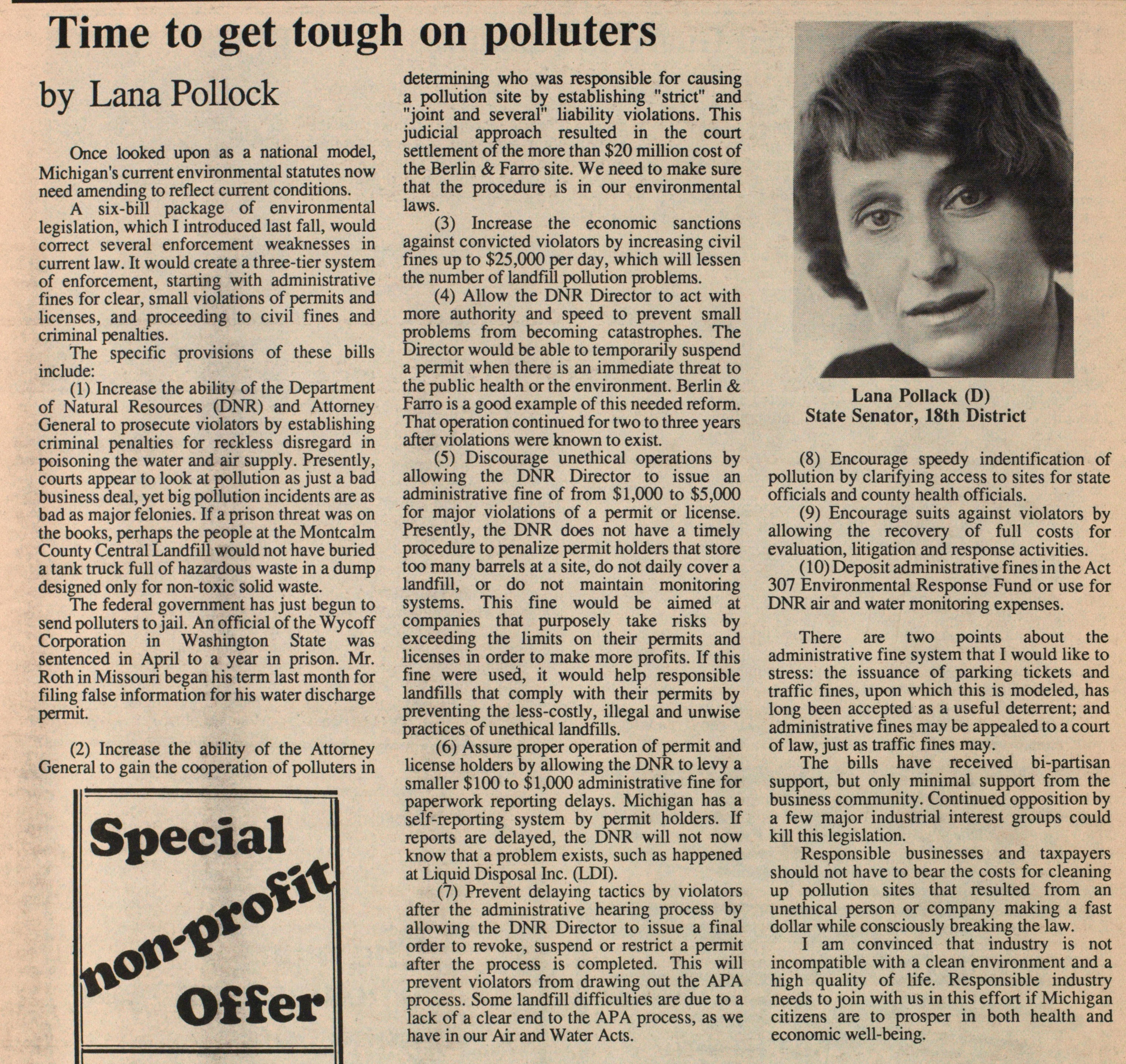 Once looked upon as a national model, Michigan's current environmental statutes now need amending to reflect current conditions. A six-bill package of environmental legislation, which I introduced last fall, would correct several enforcement weaknesses in current law. It would créate a three-tier system of enforcement, starting with administrative fines for clear, small violations of permits and licenses, and proceeding to civil fines and criminal penalties. The specifíc provisions of these bilis include: (1) Increase the ability of the Department of Natural Resources (DNR) and Attorney General to prosecute violators by establishing criminal penalties for reckless disregard in poisoning the water and air supply. Presen tly, courts appear to look at pollution as just a bad business deal, yet big pollution incidents are as bad as major felonies. If a prison threat was on the books, perhaps the people at the Montcalm County Central Landfill would not have buried a tank truck full of hazardous waste in a dump designed only for non-toxic solid waste. The federal government has just begun to send polluters to jail. An official of the Wycoff Corporation in Washington State was sentenced in April to a year in prison. Mr. Roth in Missouri began his term last month for filing false information for his water discharge permit. (2) Increase the ability of the Attorney General to gain the cooperation of polluters in determining who was responsible for causing a pollution site by establishing "strict" and "joint and several" liability violations. This judicial approach resulted in the court settlement of the more than $20 million cost of the Berlin & Farro site. We need to make sure that the procedure is in our environmental laws. (3) Increase the economie sanctions against convicted violators by increasing civil fines up to $25,000 per day, which will lessen the number of landfill pollution problems. (4) Allow the DNR Director to act with more authority and speed to prevent small problems from becoming catastrophes. The Director would be able to temporarily suspend a permit when there is an immediate threat to the public health or the environment. Berlin & Farro is a good example of this needed reform. That operation continued for two to three years after violations were known to exist. (5) Discourage unethical operations by allowing the DNR Director to issue an administrative fine of from $1,000 to $5,000 for major violations of a permit or license. Presently, the DNR does not have a timely procedure to penalize permit holders that store too many barrels at a site, do not daily cover a landfill, or do not maintain monitoring systems. This fine would be aimed at companies that purposely take risks by exceeding the limits on their permits and licenses in order to make more profits. If this fine were used, it would help responsible landfills that comply with their permits by preventing the less-costly, illegal and unwise practices of unethical landfills. (6) Assure proper operation of permit and license holders by allowing the DNR to levy a smaller $100 to $1,000 administrative fine for paperwork reporting delays. Michigan has a self-reporting system by permit holders. If reports are delayed, the DNR will not now know that a problem exists, such as happened at Liquid Disposal Inc. (LDI). (7) Prevent delaying tactics by violators after the administrative hearing process by allowing the DNR Director to issue a final order to revoke, suspend or restrict a permit after the process is completed. This will prevent violators from drawing out the APA process. Some landfill difficulties are due to a lack of a clear end to the APA process, as we have in our Air and Water Acts. (8) Encourage speedy indentification of pollution by clarifying access to sites for state officials and county health officials. (9) Encourage suits against violators by allowing the recovery of full costs for evaluation, litigation and response activities. (10) Deposit administrative fines in the Act 307 Environmental Response Fund or use for DNR air and water monitoring expenses. There are two points about the administrative fine system that I would like to stress: the issuance of parking tickets and traffic fines, upon which this is modeled, has long been accepted as a useful deterrent; and administrative fines may be appealed to a court of law, just as traffic fines may. The bilis have received bi-partisan support, but only minimal support from the business community. Continued opposition by a few major industrial interest groups could kill this legislation. Responsible businesses and taxpayers should not have to bear the costs for cleaning up pollution sites that resulted from an unethical person or company making a fast dollar while consciously breaking the law. I am convinced that industry is not incompatible with a clean environment and a high quality of life. Responsible industry needs to join with us in this effort if Michigan citizens are to prosper in both health and economie well-being.