Proposal "A": The Work Continues 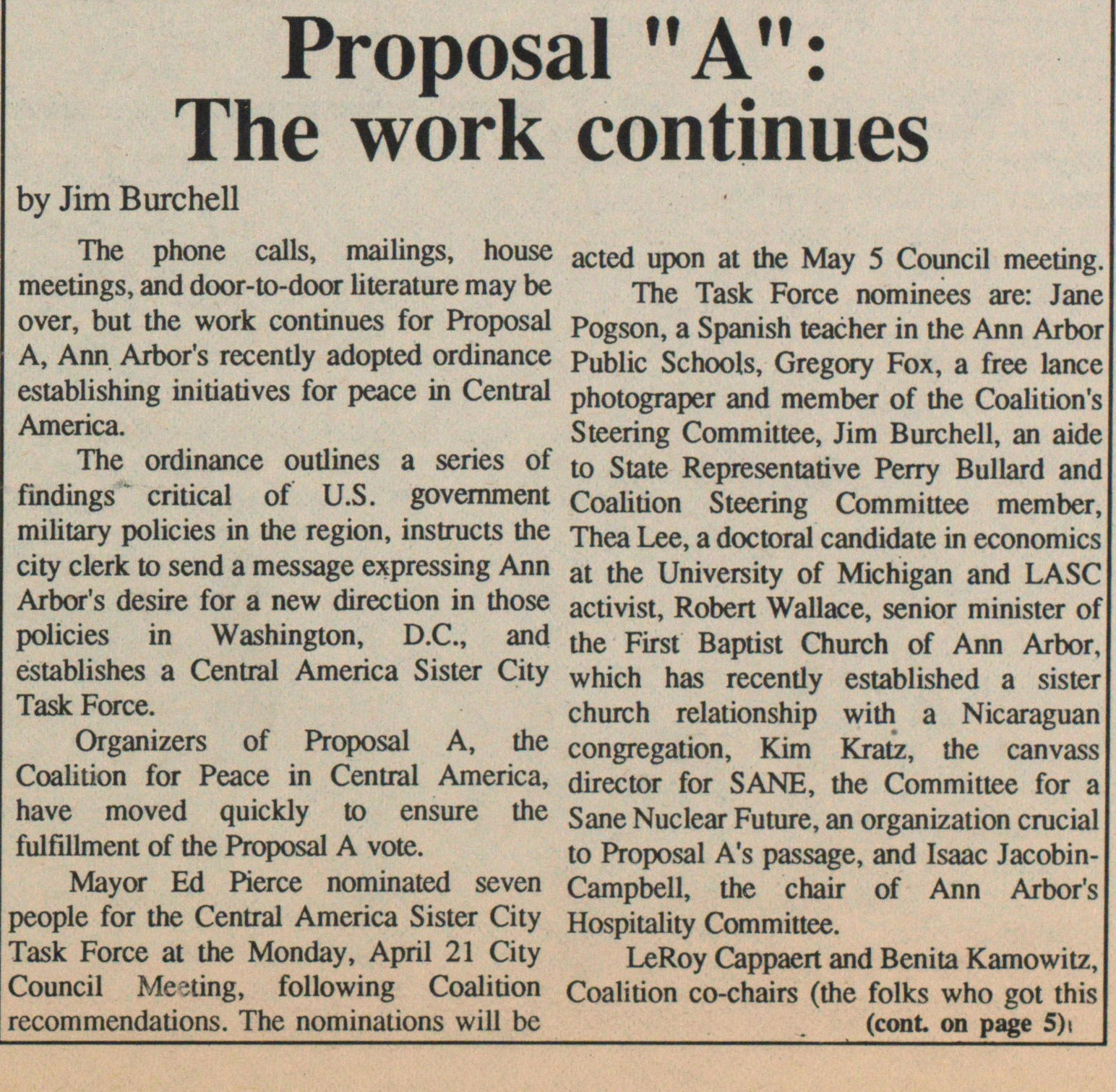 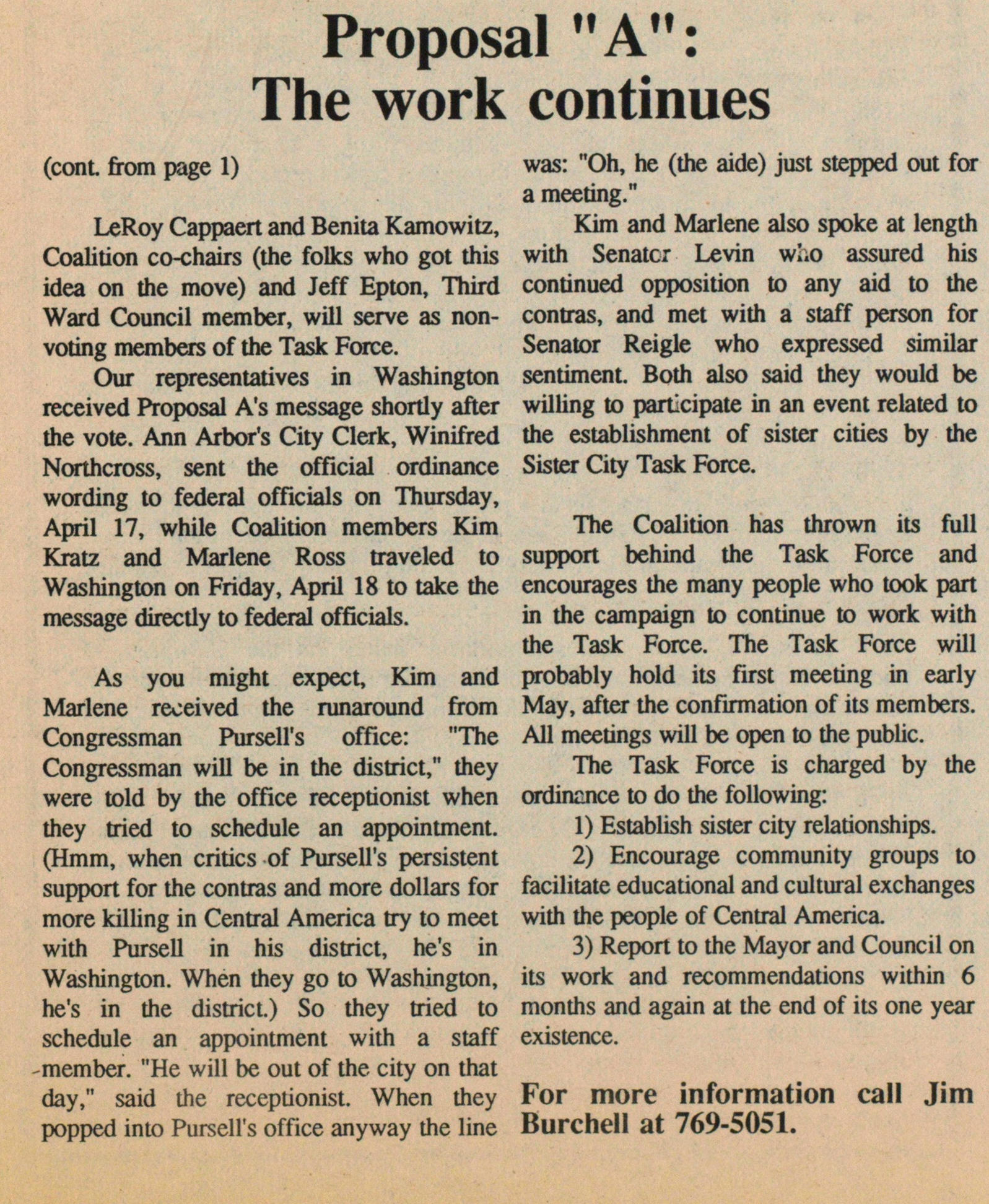 The phone calis, mailings, house meetings, and door-to-door literatura may be over, but the work continúes for Proposal A, Ann Arbor's recently adopted ordinance establishing initiatives for peace in Central America. The ordinance outlines a series of findings critical of U.S. government military policies in the región, instructs the city clerk to send a message expressing Ann Arbor's desire for a new direction in those policies in Washington, D.C., and establishes a Central America Sister City Task Force. Organizers of Proposal A, the Coalition for Peace in Central America, have moved quickly to ensure the fulfïllment of the Proposal A vote. Mayor Ed Pierce nominated seven people for the Central America Sister City Task Force at the Monday, April 21 City Council Me?ting, following Coalition recommendations. The nominations will bc acted upon at the May 5 Council meeting. The Task Forcé nominees are: Jane Pogson, a Spanish teacher in the Ann Arbor Public Schools, Gregory Fox, a free lance photograper and member of the Coalition's Steering Committee, Jim Burchell, an aide to State Representative Perry Bullard and Coalition Steering Committee member, Thea Lee, a doctoral candidate in economics at the University of Michigan and LASC activist, Robert Wallace, senior minister of the First Baptist Church of Ann Arbor, which has recently established a sister church relationship with a Nicaraguan congregation, Kim Kratz, the canvass director for SANE, the Committee for a Sane Nuclear Future, an organization crucial to Proposal A's passage, and Isaac JacobinCampbell, the chair of Ann Arbor's Hospitality Committee. LeRoy Cappaert and Benita Kamowitz, Coalition co-chairs (the folks who got this (cont on page 5)i Proposal "A": The work continúes (cont from page 1) LeRoy Cappaert and Benita Kamowitz, Coalition co-chairs (the folks who got this idea on the move) and Jeff Epton, Third Ward Council member, will serve as nonvoting members of the Task Force. Out representatives in Washington received Proposal A's message shorüy after the vote. Ann Arbor's City Clerk, Winifred Northcross, sent the official ordinance wording to federal officials on Thursday, April 17, while Coalition members Kim Kratz and Mariene Ross traveled to Washington on Friday, April 18 to take the message directly to federal officials. As you might expect, Kim and Mariene received the runaround from Congressman Pursell's office: "The Congressman will be in the district," they were told by the office receptionist when they tried to schedule an appointment. (Hmm, when critics of Pursell's persistent support for the contras and more dollars for more killing in Central America try to meet with Pursell in his district, he's in Washington. When they go to Washington, he's in the district.) So they tried to schedule an appointment with a staff -member. "He will be out of the city on that day," said the receptionist. When they popped into Pursell's office anyway the line was: "Oh, he (the aide) just stepped out for a meeting." Kim and Marlene also spoke at length with Senatcr Levin wlo assured his continued opposition to any aid to the contras, and met with a staff person for Senator Reigle who expressed similar sentiment. Both also said thcy would be willing to particípate in an event related to the establishment of sister cities by the Sister City Task Force. The Coalition has thrown its full support behind the Task Force and encourages the many people who took part in the campaign to continue to work with the Task Force. The Task Force will probably hold its first meeting in early May, after the confirmation of its members. All meetings will be open to the public. The Task Force is charged by the ordincnce to do the following: 1) Establish sister city relationships. 2) Encourage community groups to facilítate educational and cultural exchanges with the people of Central America. 3) Report to the Mayor and Council on its work and recommendations within 6 months and again at the end of its one year existence. For more information cali Jim Burchell at 769-5051.