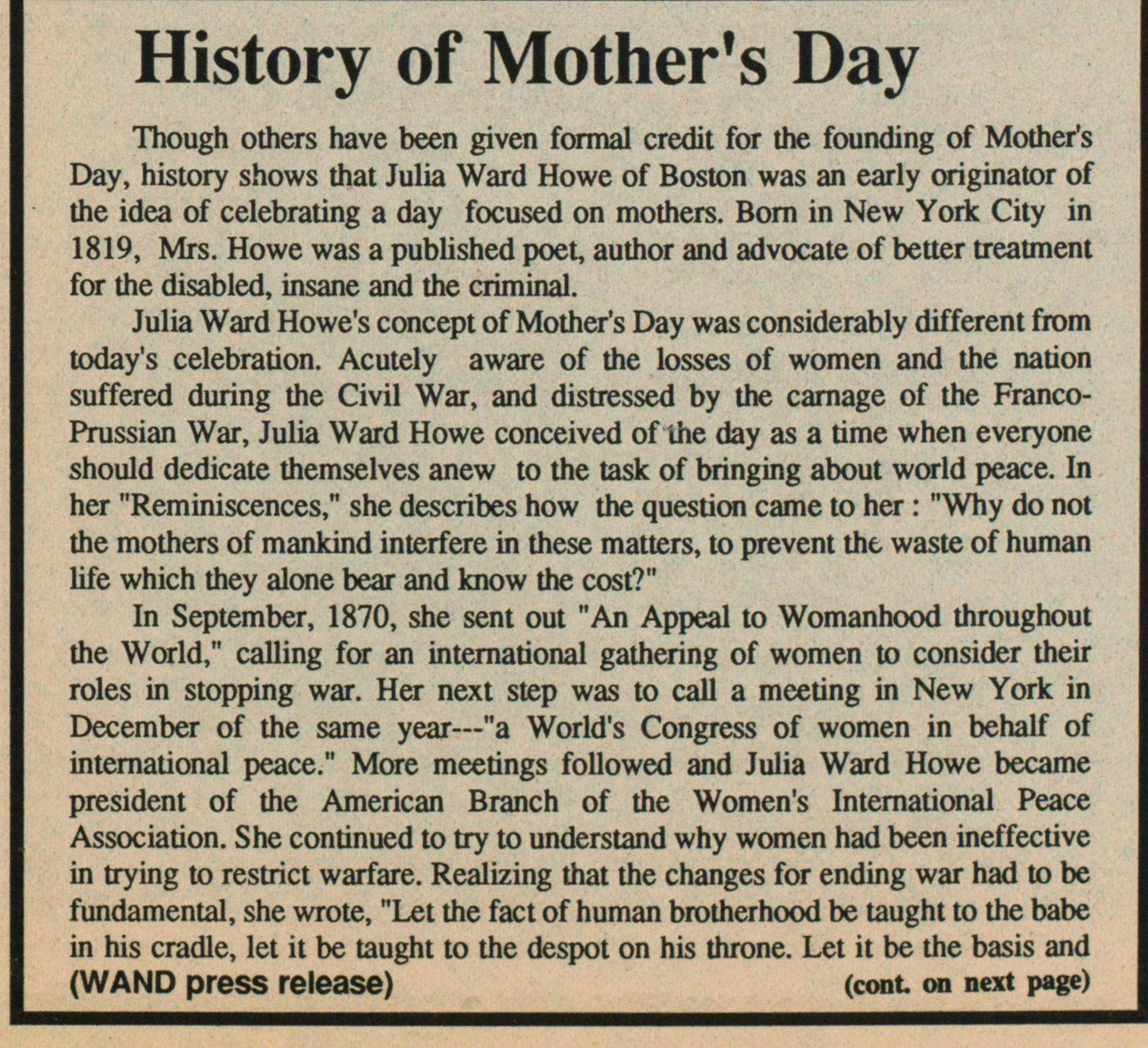 Though others have been given formal credit for the founding of Mother's Day, history shows that Julia Ward Howe of Boston was an early originator of the idea of celebrating a day focused on mothers. Bom in New York City in 1819, Mts. Howe was a published poet, author and advocate of better treatment for the disabled, insane and the criminal. Julia Ward Howe's concept of Mother's Day was considerably different from today's celebration. Acutely aware of the losses of women and the nation suffered during the Civil War, and distressed by the carnage of the FrancoPrussian War, Julia Ward Howe conceived of the day as a time when everyone should dedícate themselves anew to the task of bringing about world peace. In her "Reminiscences," she describes how the question carne to her : "Why do not the mothers of mankind interfere in these matters, to prevent the waste of human Ufe which they alone bear and know the cost?" In September, 1870, she sent out "An Appeal to Womanhood throughout the World," calling for an international gathering of women to consider their roles in stopping war. Her next step was to cali a meeting in New York in December of the same year - "a World's Congress of women in behalf of international peace." More meetings followed and Julia Ward Howe became president of the American Branch of the Women's International Peace Association. She continucd to try to understand why women had been ineffective in trying to restrict warfare. Realiing that the changes for ending war had to be fundamental, she wrote, "Let the fact of human brotherhood be taught to the babe in his eradle, let it be taught to the despot on his throne. Let it be the basis and (WAND press release) (cont on next page) History of Mother's Day (cont. from previous page) foundation of cducation and legislation, the bond of high and low, of rich and poor..." She spoke on peace in many cities and in 1887 went to England to spread her message there, but was unable to organize a Women's Peace Congress. This disappointment led to another idea: "a festival, a day which would be called Mother's Day, and be devoted to the advocacy of peace doctrines." She chose the second day of June and observed this day with her followers until her death in 1910. She often urged the newspapers to publish anieles about how to bring lasting peace and wrote many such anieles herself over theyears. The last formal observance of her Mother's Peace Day was held in Riverton, New Jersey on June 1, 1912, by the Pennsylvania Peace Society in conjunction with the Universal Peace Union. The printed invitation to this event read: "Thirtynine years ago Julia Ward Howe instituted this festival for peace - a time for women and children to come together, to meet in the country, invite the public, and recite, speak, sing and pray for "those things that make for peace." Parallel efforts to establish a regular observance in honor of mothers were being made by several other people including Mary Towles Sassen, a Kentucky school teacher who started conducting Mother's Day celebrations in 1887; Frank Hering of South Bend, Indiana, who launched a campaign for the observance of Mother's Day in 1904. Also in 1904, Anna Jarvis , who is regularly credited as the founder of the celebration, began a campaign for a nationwide observance of Mother's Day. She chose the second Sunday in May and began the custom of wearing a carnation. In 1914, on May 9, President Widrow Wilson signed a joint resolution of Congress recommending that Congress and the executive departments observe Mother's Day. The next year, the President was authorized to proclaim Mother's Day as an annual observance.In 1985, Senator John Kerry (D-MA) submitted a resolution to Congress to cali the holiday "Mother's Peace Day." The Kerry resolution states in part: Whereas world peace is an urgent goal of the United States and the American people; and Whereas a day in honor of world peace and of the special role mothers have had in seeking peace throughout human history will help bring about renewed public thinking about the important issues of peace, motherhood, and the family: Now therefore be it Resolved by the Senate and House hereby designated as "Mother's Peace Day." Women's Action For Nuclear Disarmament Education Fund, 691 Massachusetts Avenue, Arlington, MA (617) 643-4880