The Plan To Silence Dissent 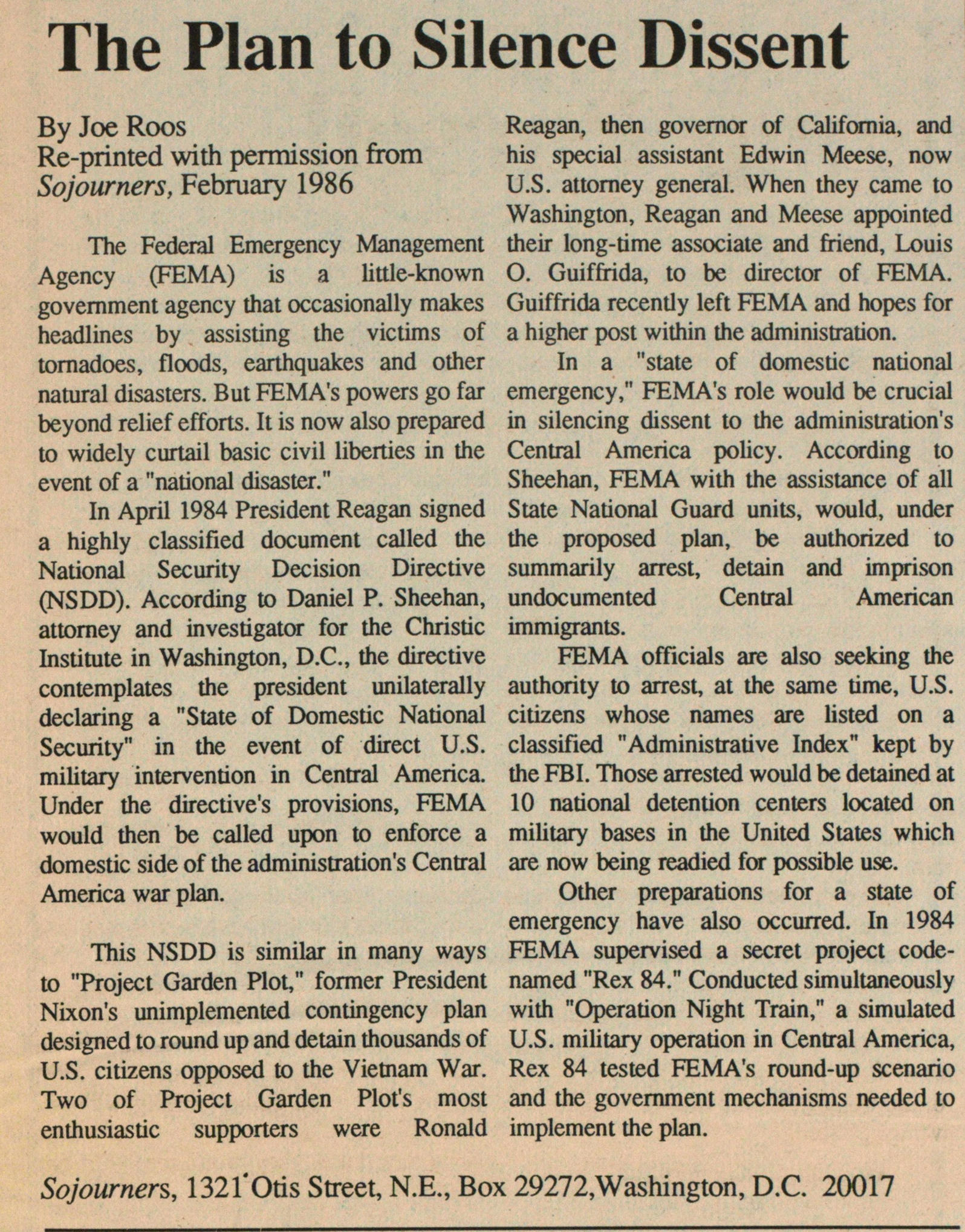 Re-printed with permission from Sojourners, February 1986 The Federal Emergency Management Agency (FEMA) is a little-known government agency that occasionally makes headlines by assistíng the victims of tornadoes, floods, earthquakes and other natural disasters. But FEMA's powers go far beyond relief efforts. It is now also prepared to widely curtail basic civil liberties in the event of a "national disaster." In April 1984 President Reagan signed a highly classified document called the National Security Decisión Directive (NSDD). According to Daniel P. Sheehan, attorney and investigator for the Christic Institute in Washington, D.C., the directive contemplates the president unilaterally declaring a "State of Domestic National Security" in the event of direct U.S. military intervention in Central America. Under the directive's provisions, FEMA would then be called upon to enforce a domestic side of the administration's Central America war plan. This NSDD is similar in many ways to "Project Garden Plot," former President Nixon's unimplemented contingency plan designed to round up and detain thousands of U.S. citizens opposed to the Vietnam War. Two of Project Garden Plot's most enthusiastic supporters were Ronald Reagan, then governor of California, and his special assistant Edwin Meese, now U.S. attorney general. When they came to Washington, Reagan and Meese appointed their long-time associate and friend, Louis O. Guiffrida, to be director of FEMA. Guiffrida recently left FEMA and hopes for a higher post within the administration. In a "state of domestic national emergency," FEMA's role would be crucial in silencing dissent to the administration's Central America policy. According to Sheehan, FEMA with the assistance of all State National Guard units, would, under the proposed plan, be authorized to summarily arrest, detain and imprison undocumented Central American immigrants. FEMA officials are also seeking the authority to arrest, at the same time, U.S. citizens whose names are listed on a classified "Administrative Index" kept by the FBI. Those arrested would be detained at 10 national de tent ion centers located on military bases in the United States which are now being readied for possible use. Other preparations for a state of emergency have also occurred. In 1984 FEMA supervised a secret project codenamed "Rex 84." Conducted simultaneously with "Operation Night Train," a simulated U.S. military operation in Central America, Rex 84 tested FEMA's round-up scenario and the government mechanisms needed to implement the plan. Sojourners, 1321'Otis Street, N.E., Box 29272,Washington, D.C. 20017