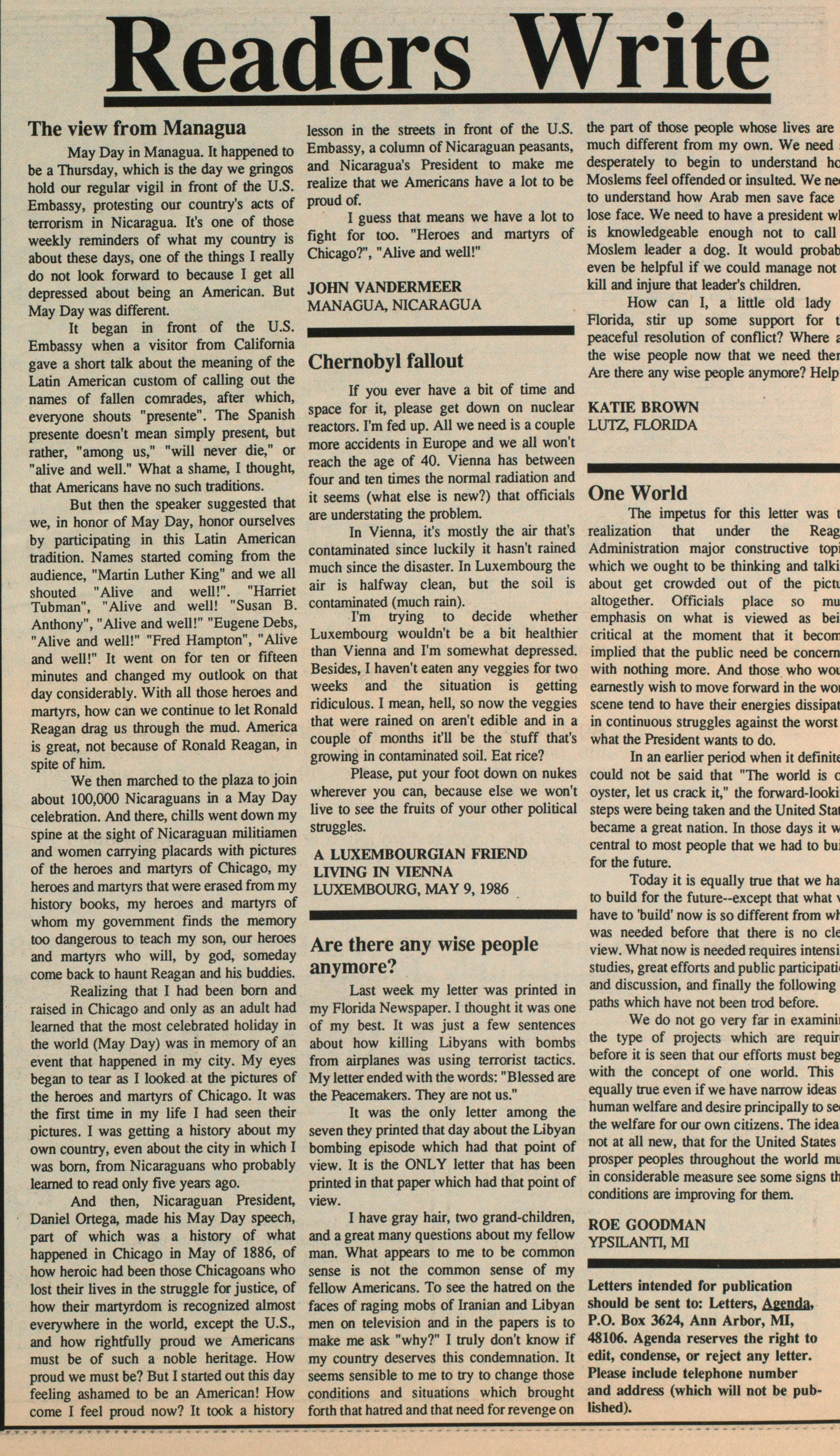 May Day in Managua. It happened to be a Thursday, which is the day we gringos hold our regular vigil in front of the U.S. Embassy, protesting our country's acts of terrorism in Nicaragua. It's one of those weekly reminders of what my country is about these days, one of the things I really do not look forward to because I get all depressed about being an American. But May Day was different It began in front of the U.S. Embassy when a visitor from California gave a short talk about the meaning of the Latín American custom of calling out the names of fallen comrades, after which, everyone shouts "presente". The Spanish presente doesn't mean simply present, but rather, "among us," "will never die," or "alive and well." What a shame, I thought, that Americans have no such traditions. But then the speaker suggested that we, in honor of May Day, honor ourselves by participating in this Latín American tradition. Names started coming from the audience, "Martín Luther King" and we all shouted "Alive and well!". "Harriet Tubman", "Alive and well! "Susan B. Anthony", "Alive and well!" "Eugene Debs, "Alive and well!" "Fred Hampton", "Alive and well!" It went on for ten or fifteen minutes and changed my outlook on that day considerably. With all those héroes and martyrs, how can we continue to let Ronald Reagan drag us through the mud. America is great, not because of Ronald Reagan, in spite of him. We then marched to the plaza to join about 100,000 Nicaraguans in a May Day celebration. And there, chills went down my spine at the sight of Nicaraguan militiamen and women carrying placards with pictures of the héroes and martyrs of Chicago, my héroes and martyrs that were erased from my history books, my héroes and martyrs of whom my government finds the memory too dangerous to teach my son, our héroes and martyrs who will, by god, someday come back to haunt Reagan and his buddies. Realizing that I had been born and raised in Chicago and only as an adult had learned that the most celebrated holiday in the world (May Day) was in memory of an event that happened in my city. My eyes began to tear as I looked at the pictures of the héroes and martyrs of Chicago. It was the fïrst time in my life I had seen their pictures. I was getting a history about my own country, even about the city in which I was born, from Nicaraguans who probably learned to read only five years ago. And then, Nicaraguan President, Daniel Ortega, made his May Day speech, part of which was a history of what happened in Chicago in May of 1886, of how heroic had been those Chicagoans who lost their lives in the struggle for justice, of how their martyrdom is recognized almost everywhere in the world, except the U.S., and how rightfully proud we Americans must be of such a noble heritage. How proud we must be? But I started out this day feeling ashamed to be an American! How come I feel proud now? It took a history lesson in the streets in front of the U.S. Embassy, a column of Nicaraguan peasants, and Nicaragua's President to make me realize that we Americans have a lot to be proud of. I guess that means we have a lot to fight for too. "Héroes and martyrs of Chicago?", "Alive and well!"