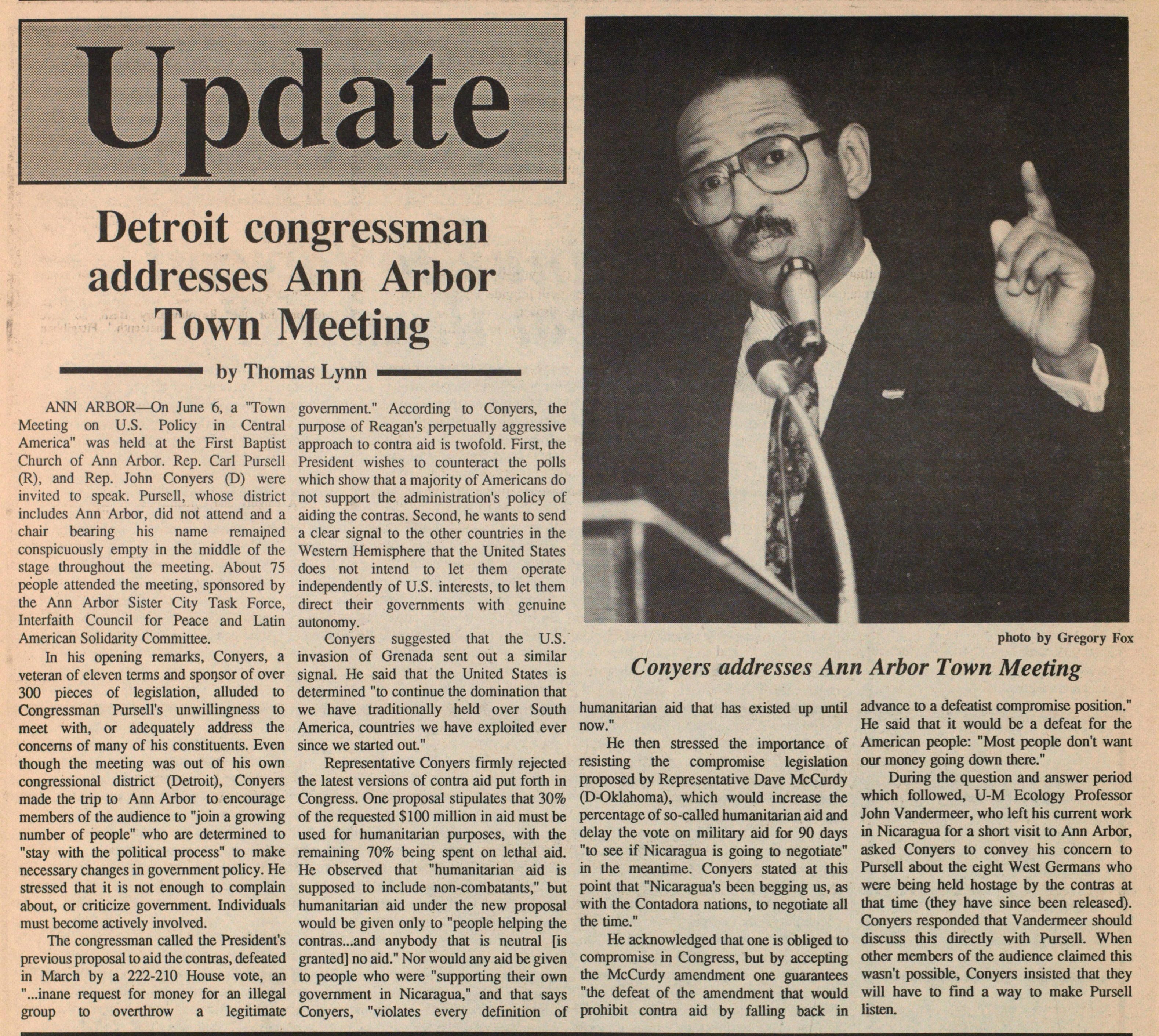 ANN ARBOR- On June 6, a "Town Meeting on U.S. Policy in Central America" was held at the First Baptist Church of Ann Arbor. Rep. Cari Pursell (R), and Rep. John Conyers (D) were invited to speak. Pursell, whose district includes Ann Arbor, did not attend and a chair hearing his name remayied conspicuously empty in the middle of the stage throughout the meeting. About 75 people attended the meeting, sponsored by the Ann Arbor Sister City Task Force, Interfaith Council for Peace and Latín American Solidarity Committee. In his opening remarks, Conyers, a veteran of eleven terms and sponsor of over 300 pieces of legislation, alluded to Congressman Pursell's unwillingness to meet with, or adequately address the concerns of many of his constituents. Even though the meeting was out of his own congressional district (Detroit), Conyers made the trip to Ann Arbor to encourage members of the audience to "join a growing number of people" who are determined to "stay with the political process" to make necessary changes in government policy. He stressed that it is not enough to complain about, or criticize governmenL Individuals must become actively involved. The congressman called the President's previous proposal to aid the contras, defeated in March by a 222-210 House vote, an "...inane request for money for an illegal group to overthrow a legitímate govemment." According to Conyers, the purpose of Reagan's perpetually aggressive approach to contra aid is twofold. First, the President wishes to counteract the polls which show that a majority of Americans do not support the administration's policy of aiding the contras. Second, he wants to send a clear signal to the other countries in the Western Hemisphere that the United States does not intend to let them opérate independently of U.S. interests, to let them direct their governments with genuine autonomy. Conyers suggested that the U.S. invasión of Grenada sent out a similar signal. He said that the United States is determined "to continue the domination that we have traditionally held over South America, countries we have exploited ever since we started out." Representative Conyers firmly rejected the latest versions of contra aid put forth in Congress. One proposal stipulates that 30% of the requested $100 million in aid must be used for humanitarian purposes, with the remaining 70% being spent on lethal aid. He observed that "humanitarian aid is supposed to include non-combatants," but humanitarian aid under the new proposal would be given only to "people helping the contras...and anybody that is neutral [is granted] no aid." Nor would any aid be given to people who were "supporting their own government in Nicaragua," and that says Conyers, "violates every definition of humanitarian aid that has existed up until now." He then stressed the importance of resisling the compromise legislaüon proposed by Representative Dave McCurdy (D-Oklahoma), which would increase the percentage of so-called humanitarian aid and delay the vote on military aid for 90 days "to see if Nicaragua is going to negotiate" in the meantime. Conyers stated at this point that "Nicaragua's been begging us, as with the Contadora nations, to negotiate all the time." He acknowledged that one is obliged to compromise in Congress, but by accepting the McCurdy amendment one guáranteos "the defeat of the amendment that would prohibit contra aid by falling back in advance to a defeatist compromise position." He said that it would bc a defeat for the American people: "Most people don't want our money going down there." During the question and answer period which followed, U-M Ecology Professor John Vandermeer, who left nis current work in Nicaragua for a short visit to Ann Arbor, asked Conyers to convey his concern to Pursell about the eight West Germans who were being held hostage by the contras at that time (they have since been released). Conyers responded that Vandermeer should discuss this directly with Pursell. When other members of the audience claimed this wasn't possible, Conyers insisted that they will have to find a way to make Pursell listen. LM A Ipdate