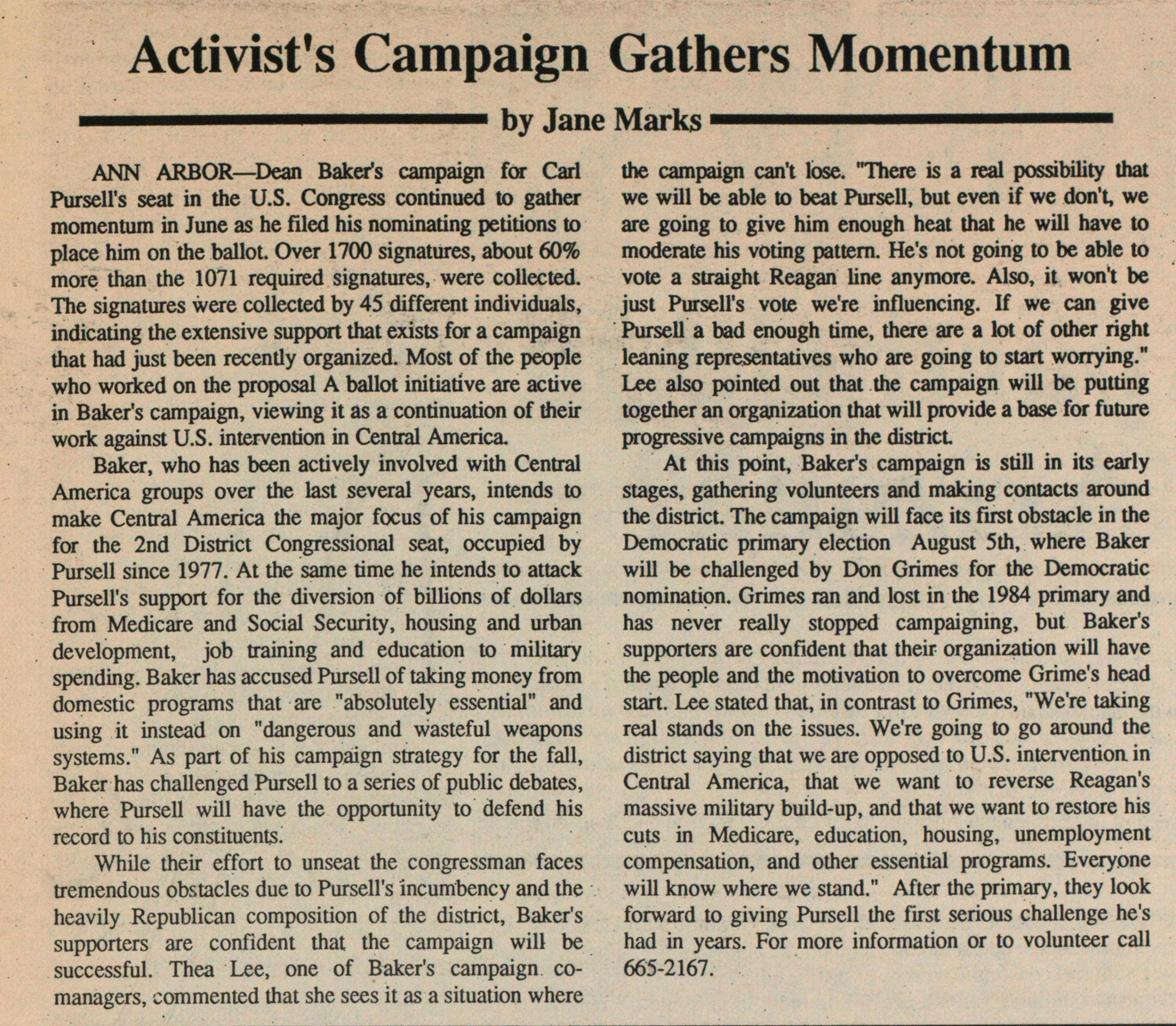 ANN ARBOR- Dean Bakens campaign for Cari Pursell's seat in the U.S. Congress continued to gather momenturn in June as he filcd his nominating petitions to place him on the ballot. Over 1700 signatures, about 60% more than the 1071 requircd signatures, were collected. The signatures were collected by 45 different individuals, indicating the extensive support that exists for a campaign that had just been recently organized. Most of the people who worked on the proposal A ballot initiative are active in Baker's campaign, viewing it as a continuation of their work against U.S. intervention in Central America. Baker, who has been actively involved with Central America groups over the last several years, intends to make Central America the major focus of his campaign for the 2nd District Congressional seat, occupied by Pursell since 1977. At the same time he intends to attack Pursell's support for the diversion of billions of dollars from Medicare and Social Security, housing and urban development, job training and education to military spending. Baker has accused Pursell of taking money from domestic programs that are "absolutely essential" and using it instead on "dangerous and wasteful weapons systems." As part of his campaign strategy for the fall, Baker has challenged Pursell to a series of public debates, where Pursell will have the opportunity to defend his record to his constituents While their effort to unseat the congressman faces tremendous obstacles due to Pursell's incumbency and the heavily Republican composition of the district, Baker's supporters are confident that the campaign will be successful. Thea Lee, one of Baker's campaign comanagers, commented that she sees it as a situation where the campaign can't lose. "Thcre is a real possibility that we will be able to beat Purscll, but even if we don't, we are going to give him enough heat that he will have to moderate his voting pattern. He's not going to be able to vote a straight Reagan Une anymore. Also, it won't be just Pursell's vote we're influencing. If we can give Pursell a bad enough time, there are a lot of other right leaning representatives who are going to start worrying." Lee also pointed out that the campaign will be putting together an organization that will provide a base for future progressive campaigns in the district At this point, Baker's campaign is slill in its early stages, gathering volunteers and making contacts around the district. The campaign will face its first obstacle in the Democratie primary election August 5th, where Baker will be challenged by Don Grimes for the Democratie nominatipn. Grimes ran and lost in the 1984 primary and has never really stopped campaigning, but Baker's supporters are confident that their organization will have the people and the motivation to overeóme Grime's head start. Lee stated that, in contrast to Grimes, "We're taking real stands on the issues. We're going to go around the district saying that we are opposed to U.S. intervention. in Central America, that we want to reverse Reagan's massive military build-up, and that we want to restore his cuts in Medicare, education, housing, unemployment compensation, and other essential programs. Everyone will know where we stand." After the primary, they look forward to giving Pursell the first serious challenge he's had in years. For more information or to volunteer cali 665-2167.