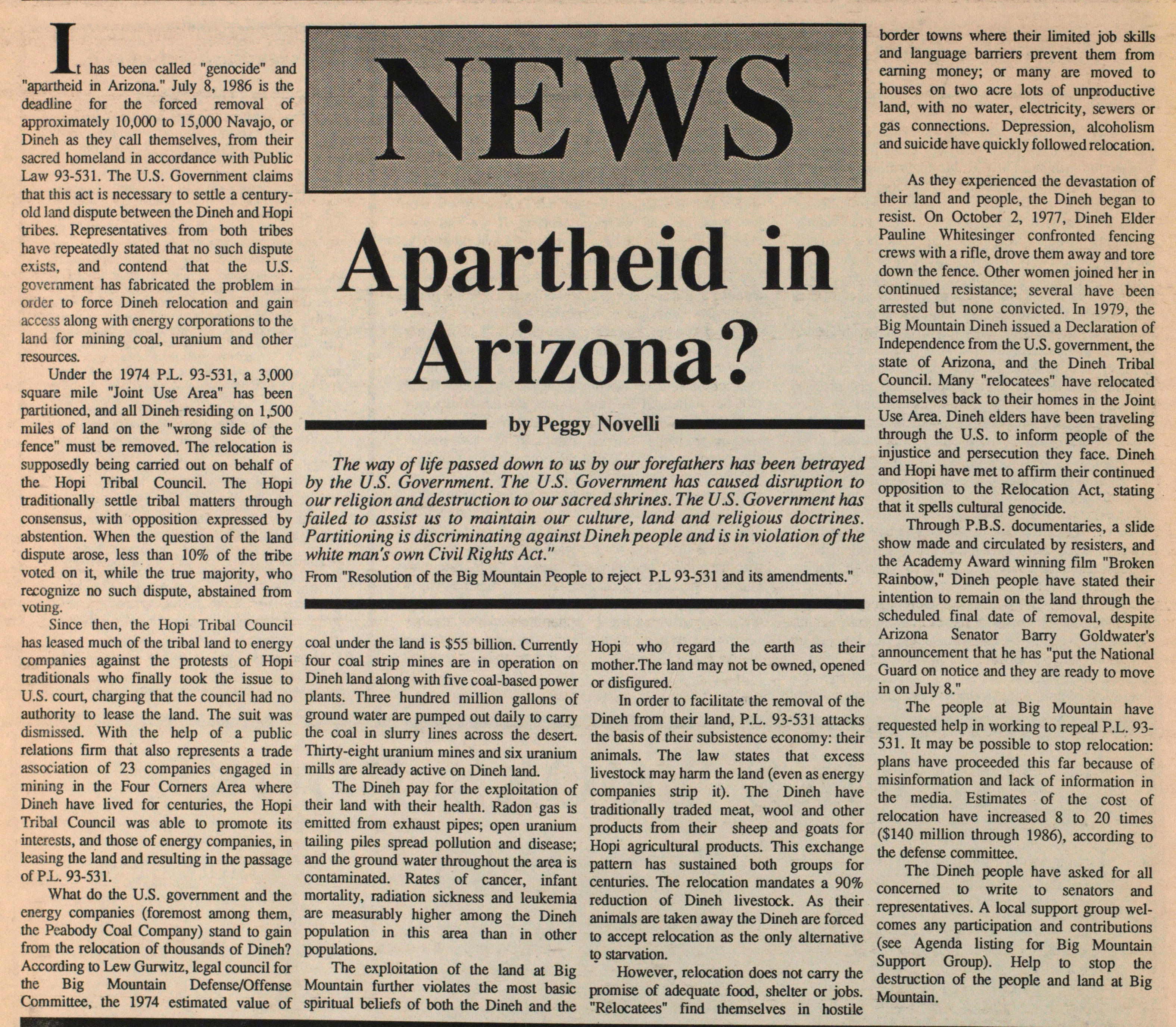 The way of Ufe passed down to usby our forefathers has been betrayed by the U.S. Government. The U.S. Government has caused disruption to our religión and destruction to our sacred shrines. The U.S. Government has failed to assist us to maintain our culture, land and religious doctrines. Partitioning is discriminating against Dineh people and is in violation of the white mans own Civil Rights Act." From "Resolution of the Big Mountain People to reject P.L 93-531 and its amenamente." -Ma has been called "genocide" and "apartheid in Arizona." July 8, 1986 is the deadline for the forced removal of approximately 10,000 to 15,000 Navajo, or Dineh as they cali themselves, from their sacred homeland in accordance with Public Law 93-531. The U.S. Government claims that this act is necessary to settle a centuryold land dispute between the Dineh and Hopi tribes. Representatives from both tribes have repeatedly stated that no such dispute exists, and contend that the U.S. government has fabricated the problem in order to force Dineh relocation and gain acccss along with energy corporations to the land for mining coal, uranium and other resources. Under the 1974 P.L. 93-531, a 3,000 square mile "Joint Use Área" has been partitioned, and all Dineh residing on 1,500 miles of land on the "wrong side of the fence" must be removed. The relocation is supposedly being carried out on behalf of the Hopi Tribal Council. The Hopi traditionally settle tribal matters through consensus, with opposition expressed by abstention. When the question of the land dispute aróse, less than 10% of the tribe voted on it, while the true majority, who recognize no such dispute, abstained from voting. Since then, the Hopi Tribal Council has leased much of the tribal land to energy companies against the protests of Hopi traditionals who finally took the issue to U.S. court, charging that the council had no authority to lease the land. The suit was dismissed. With the help of a public relations firm that also represents a trade association of 23 companies engaged in mining in the Four Corners Area where Dineh have lived for centuries, the Hopi Tribal Council was able to promote its interests, and those of energy companies, in leasing the land and resulting in the passage of Pi. 93-531. What do the U.S. government and the energy companies (foremost among them, the Peabody Coal Company) stand to gain from the relocation of thousands of Dineh? According to Lew Gurwitz, legal council for the Big Mountain DefenseOffense Committee, the 1974 estimated value of - coal under the land is $55 bUlion. Cun-ently four coal strip mines are in operation on Dineh land along with fïve coal-based power plants. Three hundred million gallons of ground water are pumped out daily to carry the coal in slurry lines across the desert. Thirty-eight uranium mines and six uranium milis are already active on Dineh land. The Dineh pay for the exploitation of their land with their health. Radon gas is emitted from exhaust pipes; open uranium tailing piles spread pollution and disease; and the ground water throughout the area is contaminated. Rates of cáncer, infant mortality, radiation sickness and leukemia are measurably higher among the Dineh population in this area than in other populations. The exploitation of the land at Big Mountain further violates the most basic spiritual beliefs of both the Dineh and the Hopi who regard the earth as their mother.The land may not be owned, opened or disfigured. In order to facilítate the removal of the Dineh from their land, P.L. 93-531 attacks the basis of their subsistence economy: their animáis. The law states that excess livestock may harm the land (even as energy companies strip it). The Dineh have traditionally traded meat, wool and other products from their sheep and goats for Hopi agricultural products. This exchange pattem has sustained both groups for centuries. The relocation mandates a 90% reduction of Dineh livestock. As their animáis are taken away the Dineh are forced to accept relocation as the only altemative to starvation. However, relocation does not carry the promise of adequate food, shelter or jobs. "Relocatees" find themselves in hostile border towns where their limited job skills and language barriers prevent them from eaming money; or many are moved to houses on two acre lots of unproductive land, with no water, electricity, sewers or gas connections. Depression, alcoholism and suicide have quickly followed relocation. As they experienced the devastation of their land and people, the Dineh began to resist. On October 2, 1977, Dineh Eider Pauline Whitesinger confronted fencing crews with a rifle, drove them away and tore down the fence. Other women joined her in continued resistance; several have been arrested but none convicted. In 1979, the Big Mountain Dineh issued a Declaration of Independence from the U.S. government, the state of Arizona, and the Dineh Tribal Council. Many "relocatees" have relocated themselves back to their homes in the Joint Use Área. Dineh elders have been traveling through the U.S. to inform people of the injustice and persecution they face. Dineh and Hopi have met to affirm their continued opposition to the Relocation Act, stating that it spells cultural genocide. Through P.B.S. documentaries, a slide show made and circulated by résisters, and the Academy Award winning film "Broken Rainbow," Dineh people have stated their intention to remain on the land through the scheduled final date of removal, despite Arizona Senator Barry Goldwater's announcement that he has "put the National Guard on notice and they are ready to move in on July 8." The people at Big Mountain have requested help in working to repeal P.L. 93531. It may be possible to stop relocation: plans have proceeded this far because of misinformation and lack of information in the media. Estimates of the cost of relocation have increased 8 to 20 times ($140 million through 1986), according to the defense committee. The Dineh people have asked for all concemed to write to senators and representatives. A local support group welcomes any participation and contributions (see Agenda listing for Big Mountain Support Group). Help to stop the destruction of the people and land at Big Mountain. NEWS