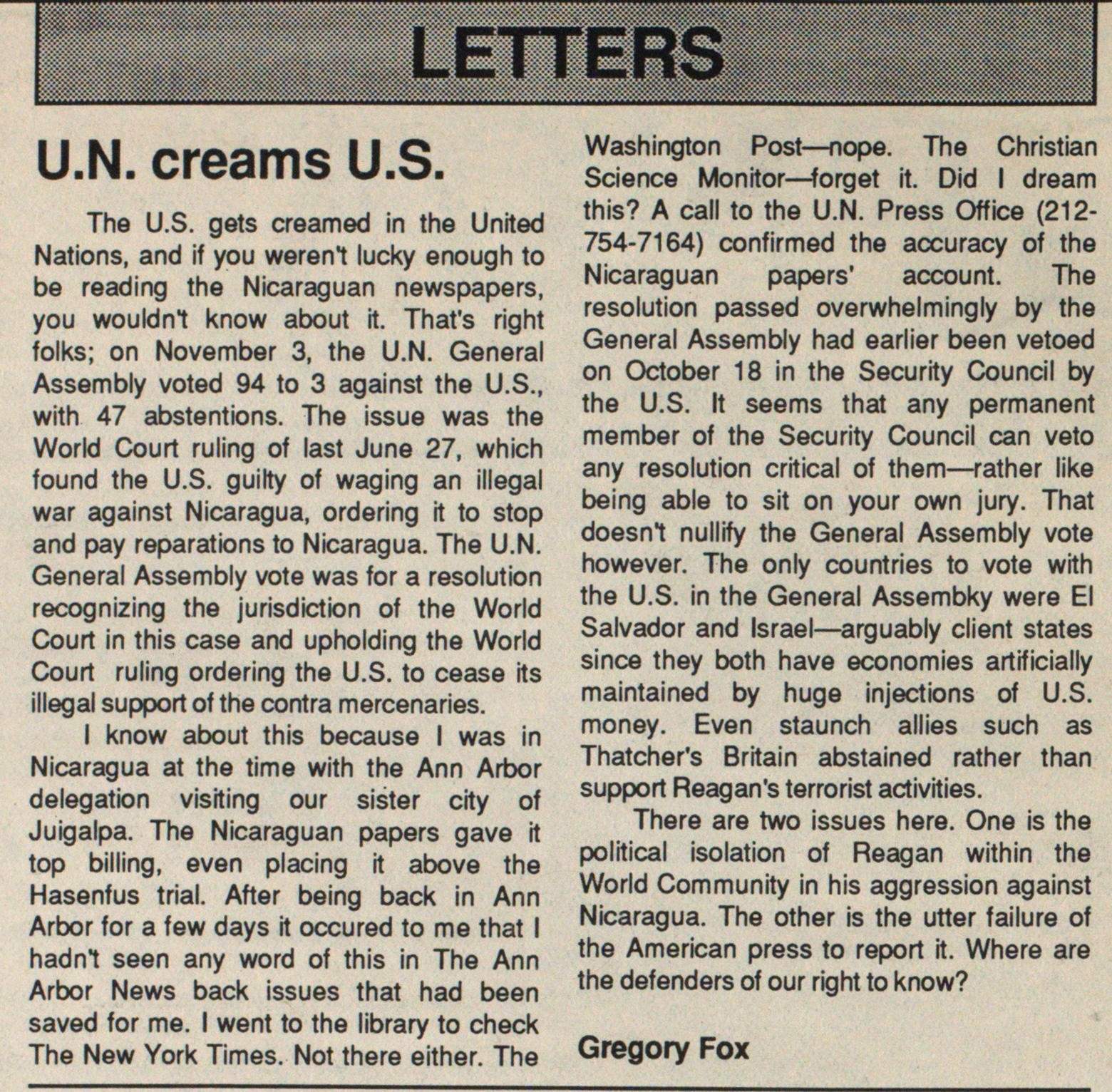 The U.S. gets creamed in the United Nations, and f you wereni lucky enough to be reading the Nicaraguan newspapers, you wouldnt know about it. That's right folks; on November 3, the U.N. General Assembly voted 94 to 3 against the U.S., with 47 abstentions. The issue was the World Court ruling of last June 27, which found the U.S. guilty of waging an illegal war against Nicaragua, ordering it to stop and pay reparations to Nicaragua. The U.N. General Assembly vote was for a resolution recognizing the jurisdiction of the World Court in this case and upholding the World Court ruling ordering the U.S. to cease its illegal support of the contra mercenaries. I know about this because I was in Nicaragua at the time with the Ann Arbor delegation visiting our sister city of Juigalpa. The Nicaraguan papers gave it top billing, even placing it above the Hasenfus trial. After being back in Ann Arbor for a few days it occured to me that I hadnt seen any word of this in The Ann Arbor News back issues that had been saved for me. I went to the library to check The New York Times. Not there either. The Washington Post- nope. The Christian Science Monitor - forget it. Did I dream this? A cali to the U.N. Press Office (212754-7164) confirmed the accuracy of the Nicaraguan papers' account. The resolution passed overwhelmingly by the General Assembly had earlier been vetoed on October 18 in the Security Council by the U.S. It seems that any permanent member of the Security Council can veto any resolution critical of them - rather like being able to sit on your own jury. That doesni nullify the General Assembly vote however. The only countries to vote with the U.S. n the General Assembky were El Salvador and Israel - arguably cliënt states since they both have economies artificially maintained by huge injections of U.S. money. Even staunch allies such as Thatcher's Britain abstained rather than support Reagan's terrorist activities. There are two issues here. One is the political isolation of Reagan within the World Community in his aggression against Nicaragua. The other is the utter failure of the American press to report t. Where are the defenders of our right to know?