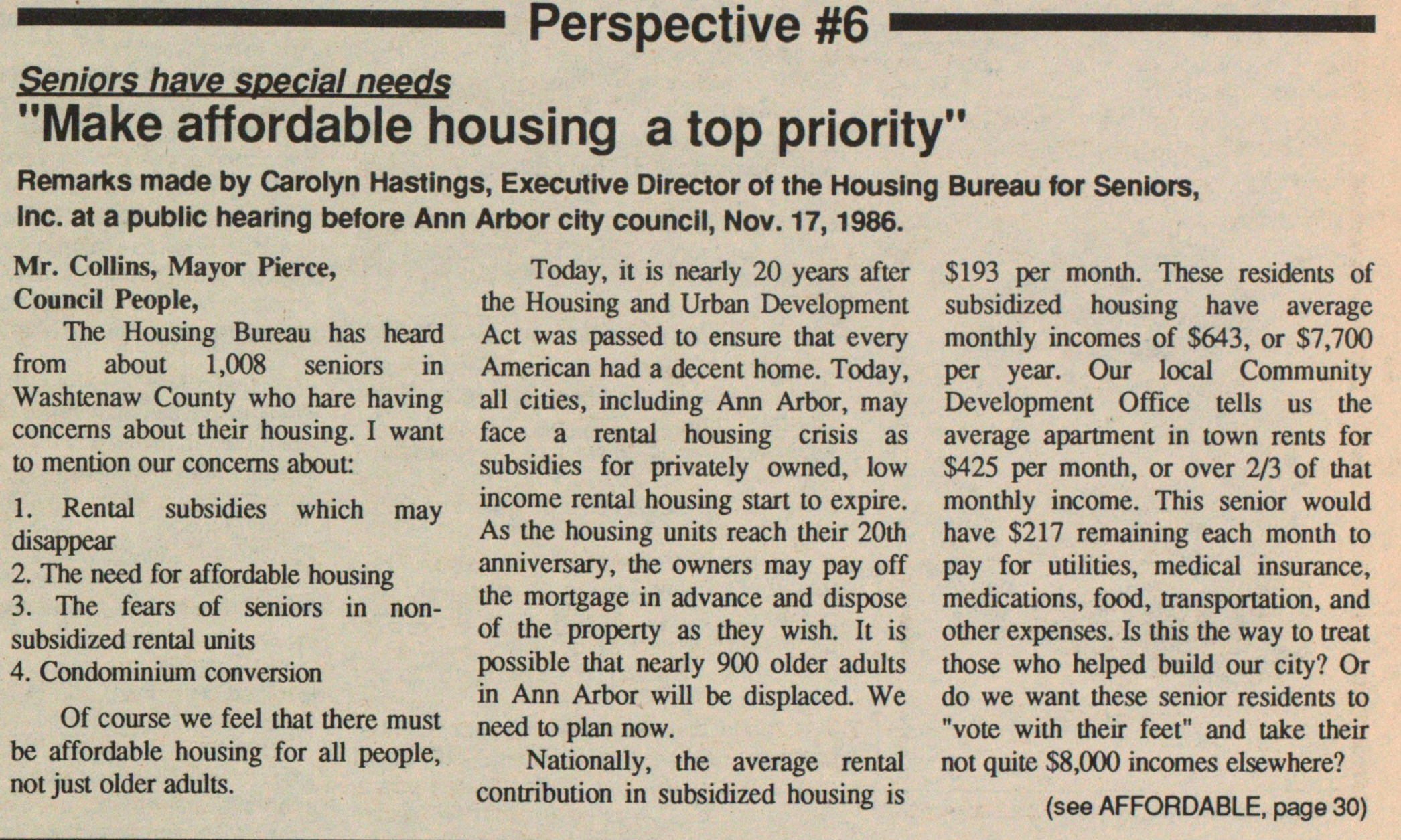 1 Perspective #6 Remarles made by Carolyn Hastings, Executive Director of the Housing Bureau tor Seniors, Inc. at a public hearing bef ore Ann Arbor city council, Nov. 17, 1986. Mr. Collins, Mayor Pierce, Council People, The Housing Bureau has heard from about 1,008 seniors in Washtenaw County who hare having concerns about their housing. I want to mention our concems about: 1. Rental subsidies which may disappear 2. The need for affordable housing 3. The fears of seniors in nonsubsidized rental units 4. Condominium conversión Of course we feel that there must be affordable housing for all people, not just older adults. Today, it is nearly 20 years after the Housing and Urban Development Act was passed to ensure that every American had a decent home. Today, all cities, including Ann Arbor, may face a rental housing crisis as subsidies for privately owned, low income rental housing start to expire. As the housing units reach their 20th anniversary, the owners may pay off the mortgage in advance and dispose of the property as they wish. It is possible that nearly 900 older adults in Ann Arbor will be displaced. We need to plan now. Nationally, the average rental contribution in subsidized housing is $193 per month. These residents of subsidized housing have average monthly incomes of $643, or $7,700 per year. Our local Community Development Office tells us the average apartment in town rents for $425 per month, or over 23 of that monthly income. This senior would have $217 remaining each month to pay for Utilities, medical insurance, medications, food, transportation, and other expenses. Is this the way to treat those who helped build our city? Or do we want these senior residents to "vote with their feet" and take their not quite $8,000 incomes elsewhere? (see AFFORDABLE, page 30) AFFORDABLE (cont. from page 9) Many say seniors are wealthy. I guess a few must be. But a 1985 Michigan study says 57% depend on social security and 23% of Michigan seniosr live below the poverty line. We hear from seniors who are homeless and from seniors who fear becoming homeless. One dient, now homeless, told us this story. In 1980 he was renting a single room for what he considered an affordable $125 per month. By 1986 the rent had been raised to $180, an ncrease of 44% in six years. When he could not pay $180, the owner gave him a 30-day notice. He moved nto the homeless shelter in early September. He feels he can pay $160 per month for one room. Since early August he has searched unsuccessfully for a private room to rent for that amount. Seniors renting apartments in complexos about town teil us it is ncreasingly hard to sign a year's lease. They say leases are short so landlords can raise the rent more often. When the Housing Bureau surveyed Ann Arbor apartments one year ago while compiling information for our Housing Guide, we found two apartment buildings (102 units) with one bedroom apartments renting at $300, none lower. Our older people fear that the rent will rise and they, too, will be evicted. In Michigan 15% of seniors are renters. We have heard from Tower Plaza tenants who are now scared about housing. At first we reassured some, saying seniors were protected by law from condo conversions. We tried hard to get a copy of the regulations, which weren't easy to find. When we found them, there were so many whereases and such, we couldnl understand them, much less reassure clients. Legal Aide told us to send each senior to them- individual legal advice was necessary. Now we hear you must be 71 or paraplegic to be eligible for an extended lease. We also learned that seniors at Tower Plaza are not necessarily wealthy. Some choose to pay over 50% of their income on rent because of the n-town, convenient location. Seniors do feel concerned and panicky about having to relocate from Tower Plaza. I urge you to seriously identify and implement ways to keep affordable housing in our city. Most of our older adults are not wealthy, and I doni think they deserve to be run out of town. If Ann Arbor decides to make affordable housing a top priority, I know we can do it. Thank you.