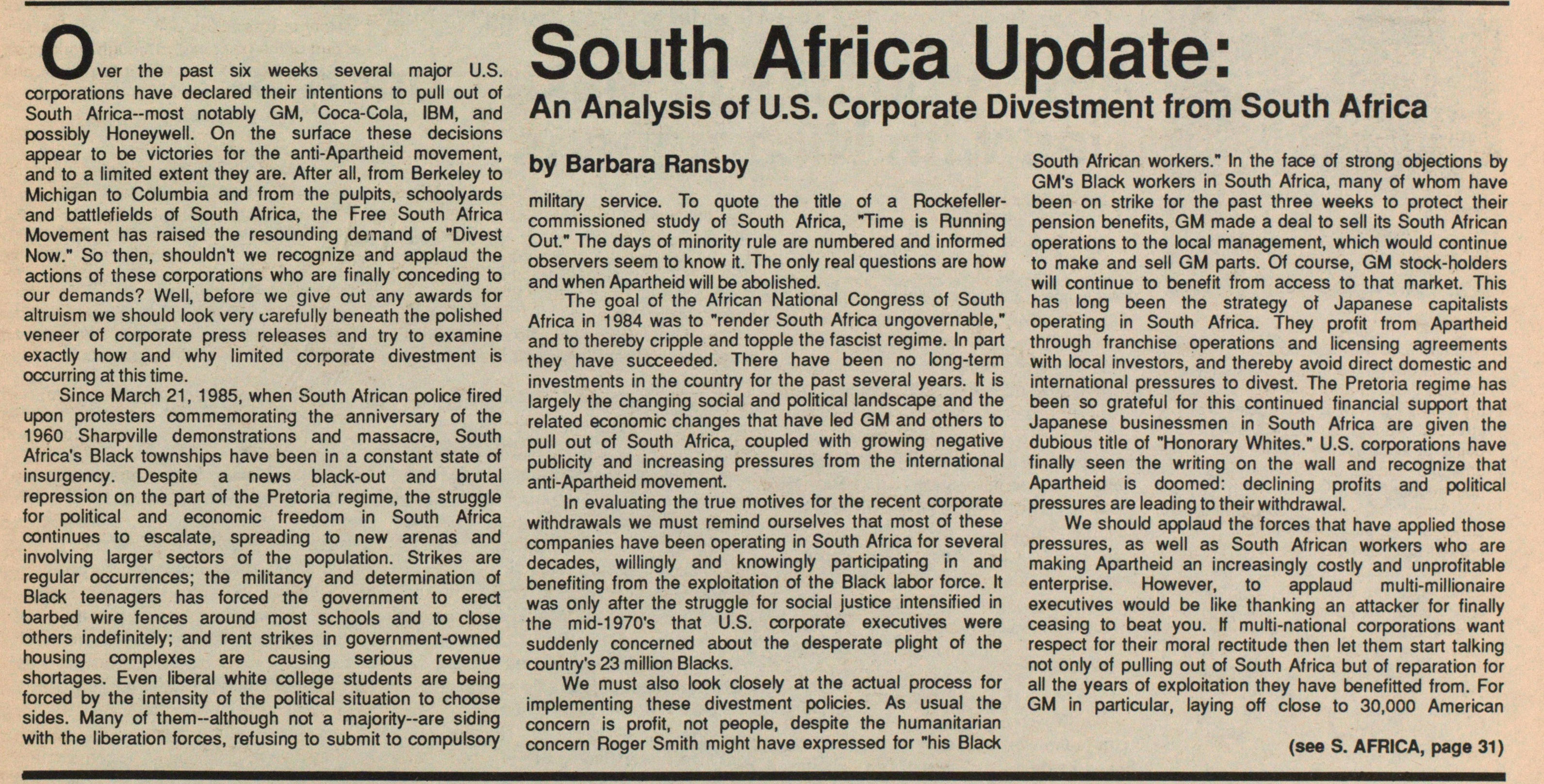 ver the past six weeks several major U.S. ccrporations have declared their intentions to pull out of South Africa--most notably GM, Coca-Cola, IBM, and possibly Honeywell. On the surface these decisions appear to be victories ior the anti-Apartheid movement, and to a limited extent they are. After all, from Berkeley to Michigan to Columbia and from the pulpits, schoolyards and battlefields of South África, the Free South África Movement has raised the resounding demand of "Divest Now." So then, shouldnl we recognize and applaud the actions of these corporations who are finally conceding to our demands? Well, before we give out any awards for altruism we should look very carefully beneath the polished veneer of corporate press releases and try to examine exactly how and why limited corporate divestment is occurring at this time. Since March 21, 1985, when South African pólice fired upon protesters commemorating the anniversary of the 1960 Sharpville demonstrations and massacre, South Africa's Black townships have been in a constant state of insurgency. Despite a news black-out and brutal repression on the part of the Pretoria regime, the struggle for political and economie freedom in South África continúes to escálate, spreading to new arenas and nvolving larger sectors of the population. Strikes are regular occurrences; the militancy and determinaron of Black teenagers has forced the government to erect barbed wire fences around most schools and to cbse others indefinitely; and rent strikes n government-owned housing complexes are causing serious revenue shortages. Even liberal white college students are being forced by the intensity of the political situation to choose sides. Many of them-although not a majority--are siding with the liberation forces, refusing to submit to compulsory military service. To quote the tille of a Rockefellercommissioned study of South África, "Time is Running Out." The days of minority rule are numbered and informed observers seem to know it. The only real questions are how and when Apartheid will be abolished. The goal of the African National Congress of South África in 1984 was to "render South África ungovernable," and to thereby cripple and topple the fascist regime. In part they have succeeded. There have been no long-term investments in the country for the past several years. It is largely the changing social and politica! landscape and the related economie changes that have led GM and others to pull out of South África, coupled with growing negative publicity and increasing pressures from the international anti-Apartheid movement. In evaluating the true motives for the recent corporate withdrawals we must remind ourselves that most of these companies have been operating in South África for several decades, willingly and knowingly participating in and benefiting from the exploitation of the Black labor forcé. It was only after the struggle for social justice intensified in the mid-1970's that U.S. corporate executives were suddenly concerned about the desperate plight of the country's 23 million Blacks. We must also look closely at the actual process for implementing these divestment policies. As usual the concern s profit, not people, despite the humanitarian concern Roger Smith might have expressed for "his Black South African workers." In the face of strong objections by GM's Black workers in South África, many of whom have been on strike for the past three weeks to protect their pension benefits, GM made a deal to sell its South African operations to the local management, which would continue to make and sell GM parts. Of course, GM stock-holders will continue to benefit from access to that market. This has long been the strategy of Japanese capitalists operating in South África. They profit from Apartheid through franchise operations and licensing agreements with local investors, and thereby avoid direct domestic and international pressures to divest. The Pretoria regime has been so grateful for this continued financial support that Japanese businessmen in South África are given the dubious title of "Honorary Whites." U.S. corporations have finalty seen the writing on the wall and recognize that Apartheid is doomed: declining profits and political pressures are leading to their withdrawal. We should applaud the forces that have applied those pressures, as well as South African workers who are making Apartheid an increasingly costly and unprofitable enterprise. However, to applaud multi-millionaire executives would be like thanking an attacker for finally ceasing to beat you. If multi-national corporations want respect for their moral rectitude then let them start talking not only of puiling out of South África but of reparatbn for all the years of exploitation they have benefitted from. For GM in particular, laying off close to 30,000 American (see S. ÁFRICA, page 31) S. ÁFRICA (con t. f rom page 11) workers should teil us something about the depth of the corporation's concern for not only workers 10,000 miles away but those rkjht here in Michigan as well. Nevertheless, despite companies' less than admirable reasons for puiling out of South África, the gesture is not meaningless. tt indicates that the politica] situation in South África is ripe for fundamental social change. The people of South África have determined that there will no longer be business as usual in that country until Apartheid is abolished and economie and social justice are realized. Their courage and resolve is what really deserves our applause. And it is that courage and resolve which should continue to inspire those of us in the American solidarity movement to keep up the pressures and to keep the issue alive until the fascist system of Apartheid is, in fact, dead and buried.