The Allen Creek Drainage Area "we Caught The Big Fish" 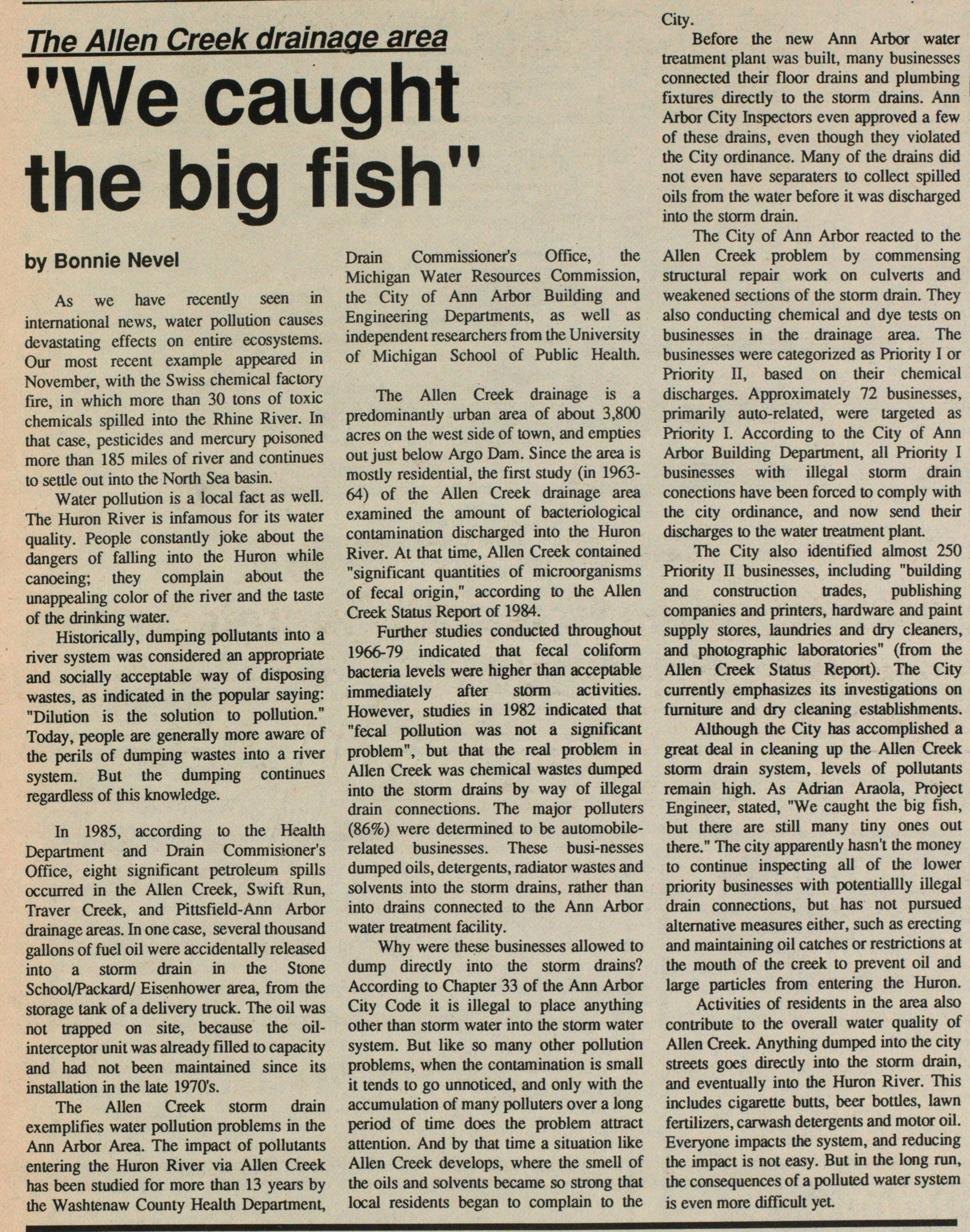 As we have recently seen in international news, water pollution causes devastating effects on entire ecosystems. Out most recent example appeared in November, with the Swiss chemical factory fire, in which more than 30 tons of toxic Chemicals spilled into the Rhine River. In that case, pesticides and mercury poisoned more than 185 miles of river and continúes to settle out into the North Sea basin. Water pollution is a local fact as well. The Huron River is infamous for its water quality. People constantly joke about the dangers of falling into the Huron while canoeing; they complain about the unappealing color of the river and the taste of the drinking water. Historically, dumping pollutants into a river system was considered an appropriate and socially acceptable way of disposing wastes, as indicated in the popular saying: "Dilution is the solution to pollution." Today, people are generally more aware of the perils of dumping wastes into a river system. But the dumping continúes regardless of this knowledge. In 1985, according to the Health Department and Drain Commisioner's Office, eight significant petroleum spills occurred in the Allen Creek, Swift Run, Traver Creek, and Pittsfield-Ann Arbor drainage areas. In one case, several thousand gallons of fuel oil were accidentally released into a storm drain in the Stone SchoolPackard Eisenhower area, from the storage tank of a delivery truck. The oil was not trapped on site, because the oilinterceptor unit was already filled to capacity and had not been maintained since its installation in the late 1970's. The Allen Creek storm drain exemplifies water pollution problems in the Ann Arbor Area. The impact of pollutants entering the Huron River via Allen Creek has been studied for more than 13 years by the Washtenaw County Health Department, Drain Commissioner's Office, the Michigan Water Resources Commission, the City of Ann Arbor Building and Engineering Departments, as well as independent researchers from the University of Michigan School of Public Health. The Allen Creek drainage is a predominantly urban area of about 3,800 acres on the west side of town, and empties out just below Argo Dam. Since the area is mostly residential, the first study (in 196364) of the Allen Creek drainage area examined the amount of bacteriological contamination discharged into the Huron River. At that time, Allen Creek contained "significant quantities of microorganisms of fecal origin," according to the Allen Creek Status Report of 1984. Further studies conducted throughout 1966-79 indica ted that fecal coliform bacteria levéis were higher than acceptable immediately after storm activities. However, studies in 1982 indicated that "fecal pollution was not a significant problem", but that the real problem in Allen Creek was chemical wastes dumped into the storm drains by way of illegal drain connections. The major polluters (86%) were determined to be automobilerelated businesses. These busi-nesses dumped oils, detergents, radiator wastes and solvents into the storm drains, rather than into drains connected to the Ann Arbor water treatment facility. Why were these businesses allowed to dump directly into the storm drains? According to Chapter 33 of the Ann Arbor City Code it is illegal to place anything other than storm water into the storm water system. But like so man y other pollution problems, when the contamination is small it tends to go unnoticed, and only with the accumulation of many polluters over a long period of time does the problem attract attention. And by that time a situation like Allen Creek develops, where the smell of the oils and solvents became so strong that local residents began to complain to the City. Before the new Ann Arbor water treatmcnt plant was built, many businesses connected their floor drains and plumbing fixtures directly to the storm drains. Ann Arbor City Inspectors even approved a few of these drains, even though they violated the City ordinance. Many of the drains did not even have separaters to collect spilied oils from the water before it was discharged into the storm drain. The City of Ann Arbor reacted to the Allen Creek problem by commensing structural repair work on culverts and weakened sections of the storm drain. They also conducting chemical and dye tests on businesses in the drainage area. The businesses were categorized as Priority I or Priority II, based on their chemical discharges. Approximately 72 businesses, primarily auto-related, were targeted as Priority I. According to the City of Ann Arbor Building Department, all Priority I businesses with illegal storm drain conections have been forced to comply with the city ordinance, and now send their discharges to the water treatment plant The City also identified almost 250 Priority II businesses, including "building and construction trades, publishing companies and printers, hardware and paint supply stores, laundries and dry cleaners, and photographic laboratories" (from the Allen Creek Status Report). The City currently emphasics its investigations on furniture and dry cleaning establishments. Although the City has accomplished a great deal in cleaning up the Allen Creek storm drain system, levéis of pollutants remain high. As Adrián Araola, Project Engineer, stated, "We caught the big fish, but there are still many tiny ones out there." The city apparently hasn't the money to continue inspecting all of the lower priority businesses with potentiallly illegal drain connections, but has not pursued alternative measures either, such as erecting and maintaining oil catches or restrictions at the mouth of the creek to prevent oil and large particles from entering the Huron. Activities of residents in the area also contribute to the overall water quality of Allen Creek. Anything dumped into the city streets goes directly into the storm drain, and eventually into the Huron River. This includes cigarette butts, beer bottles, lawn fertilizers, carwash detergents and motor oil. Everyone impacts the system, and reducing the impact is not easy. But in the long run, the consequences of a polluted water system is even more difficult yet