The Religious Community And Peace 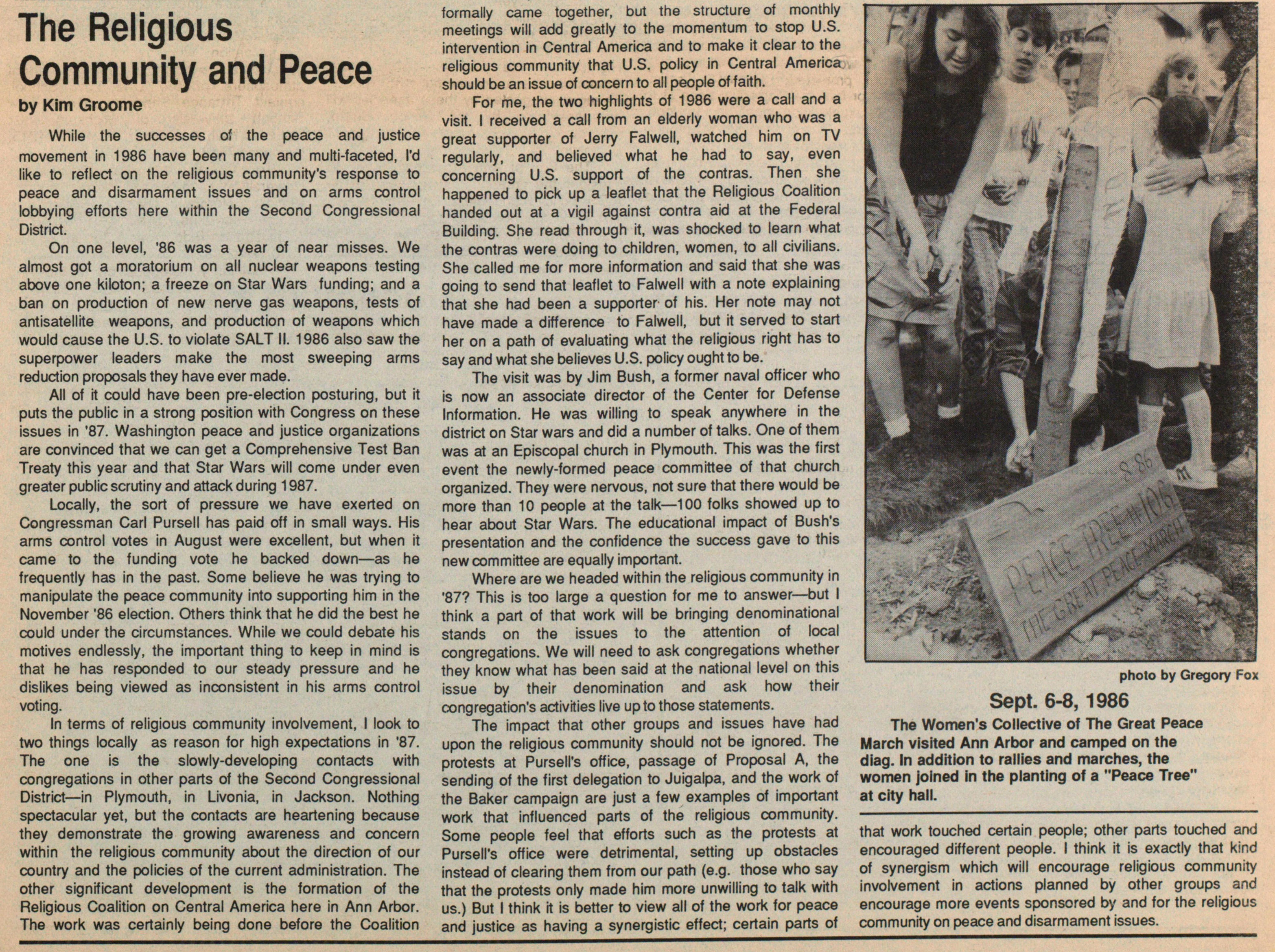 While the successes of the peace and justice movement in 1986 have been many and multi-faceted, l'd like to reflect on the religious community's response to peace and disarmament issues and on arms control lobbying efforts here within the Second Congressional District. On one level, '86 was a year of near misses. We almost got a moratorium on all nuclear weapons testing above one kiloton; a freeze on Star Wars funding; and a ban on production of new nerve gas weapons, tests of antisatellite weapons, and production of weapons which would cause the U.S. to viólate SALT II. 1986 also saw the superpower leaders make the most sweeping arms reduction proposals they have ever made. All of rt could have been pre-election posturing, but t puts the public in a strong position with Congress on these issues in '87. Washington peace and justice organizations are convinced that we can get a Comprehensive Test Ban Treaty this year and that Star Wars will come under even greater public scrutiny and attack during 1 987. Locally, the sort of pressure we have exerted on Congressman Cari Pursell has paid off in small ways. His arms control votes in August were excellent, but when it carne to the funding vote he backed down - as he frequently has in the past. Some believe he was trying to manipúlate the peace community into supporting him in the November '86 election. Others think that he did the best he could under the circumstances. While we could debate his motives endlessly, the important thing to keep in mind is that he has responded to our steady pressure and he dislikes being viewed as inconsistent in his arms control voting. In terms of religious community involvement, I look to two things locally as reason for high expectations in '87. The one is the slowly-developing contacts with congregations in other parts of the Second Congressional District - in Plymouth, in Livonia, in Jackson. Nothing spectacular yet, but the contacts are heartening because they demónstrate the growing awareness and concern within the religious community about the direction of our country and the policies of the current administration. The other significant development is the formation of the Religious Coalition on Central America here in Ann Arbor. The work was certainly being done before the Coalition formally carne together, but the structure of monthly meetings will add greatly to the momentum to stop U.S. ntervention n Central America and to make t clear to the religious community that U.S. policy in Central America shoukJ be an issue of concern to all people of faith. For me, the two highlights of 1986 were a cali and a visit. I received a cali from an elderly woman who was a great supporter of Jerry Falwell, watched him on TV regularly, and believed what he had to say, even concerning U.S. support of the contras. Then she happened to piek up a leaflet that the Religious Coalition handed out at a vigil against contra aid at the Federal Building. She read through it, was shocked to learn what the contras were doing to children, women, to all civilians. She called me for more nformation and said that she was going to send that leaflet to Falwell with a note explaining that she had been a supporter of his. Her note may not have made a difference to Falwell, but it served to start her on a path of evaluating what the religious right has to say and what she believes U.S. policy ought to be. The visit was by Jim Bush, a former naval officer who is now an associate director of the Center for Defense Information. He was willing to speak anywhere in the district on Star wars and did a number of talks. One of them was at an Episcopal church in Plymouth. This was the first event the newly-formed peace committee of that church organized. They were nervous, not sure that there would be more than 10 people at the talk- 100 folks showed up to hear about Star Wars. The educational impact of Bush's presentation and the confidence the success gave to this new committee are equally important. Where are we headed within the religious community in '87? This is too large a question for me to answer- but I think a part of that work will be bringing denominational stands on the issues to the attention of local congregations. We will need to ask congregations whether they know what has been said at the national level on this issue by their denomination and ask how their congregation's activities live up to those statements. The impact that other groups and issues have had upon the religious community should not be ignored. The protests at PurselPs office, passage of Proposal A, the sending of the first delegation to Juigalpa, and the work of the Baker campaign are just a few examples of important work that influenced parts of the religious community. Some people feel that efforts such as the protests at Pursell's office were detrimental, setting up obstacles instead of clearing them from our path (e.g. those who say that the protests only made him more unwilling to talk with us.) But I think it is better to view all of the work for peace and justice as having a synergistic effect; certain parts of that work touched certain people; other parts touched and encouraged different people. I think t is exactly that kind of synergism which will encourage religious community nvolvement n actions planned by other groups and encourage more events sponsored by and for the religious community on peace and disarmament issues. Sept. 6-8, 1986 The Women's Collective of The Great Peace March visited Ann Arbor and camped on the diag. In addition to rallies and marches, the women joined in the planting of a "Peace Tree" at city hall.