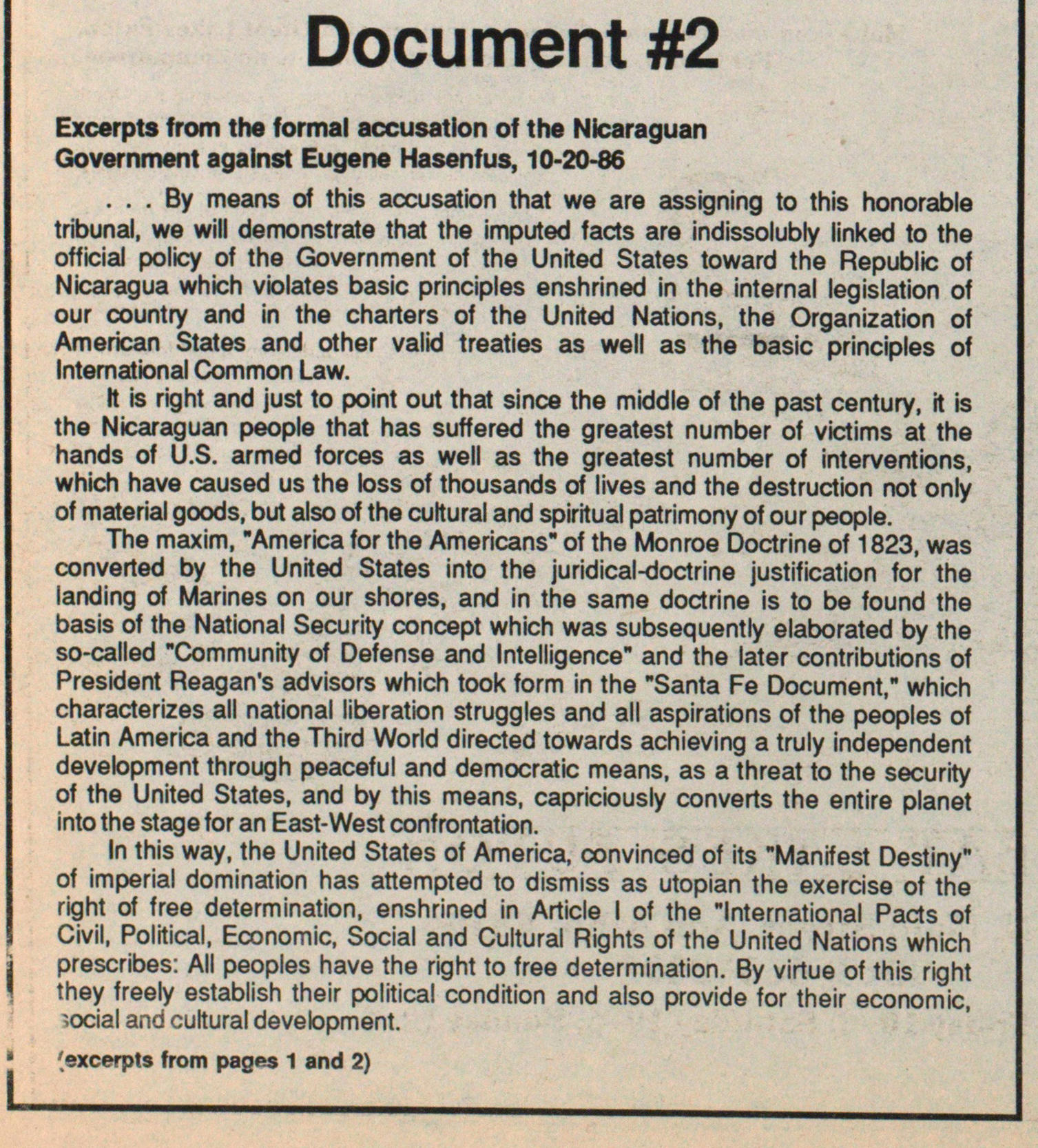 Excerpts f rom the formal accusatlon of the Nicaraguan Government against Eugene Hasenfus, 10-20-86 . . . By means of this accusation that we are assigning to this honorable tribunal, we will demónstrate that the mputed facts are indissolubly linked to the official policy of the Government of the United States toward the Republic of Nicaragua which violates basic principies enshrined in the internal legislation of our country and n the charters of the United Nations, the Organization of American States and other valid treaties as well as the basic principies of International Common Law. It is right and just to point out that since the middle of the past century, it is the Nicaraguan people that has suffered the greatest number of victims at the hands of U.S. armed forces as well as the greatest number of interventions, which have caused us the loss of thousands of lives and the destruction not only of material goods, but also of the cultural and spiritual patrimony of our people. The maxim, "America for the Americans" of the Monroe Doctrine of 1823, was converted by the United States into the juridical-doctrine justification for the landing of Marines on our shores, and in the same doctrine is to be found the basis of the National Security concept which was subsequently elaborated by the so-called "Community of Defense and Intelligence" and the later contributtons of President Reagan's advisors which took form in the "Santa Fe Document," which characterizes all national liberation struggles and all aspirations of the peoples of Latin America and the Third World directed towards achieving a truly independent development through peaceful and democratie means, as a threat to the security of the United States, and by this means, capricbusly converts the entire planet into the stage for an East-West confrontation. In this way, the United States of America, convinced of its "Manifest Destiny" of imperial domination has attempted to dismiss as utopian the exercise of the right of free determination, enshrined in Article I of the "International Pacts of Civil, Polmcat, Economie, Social and Cultural Rights of the United Nations which prescribes: All peoples have the right to free determination. By virtue of this right they freely establish their political condition and also provide for their economie social and cultural development. '.excerpts from pages 1 and 2)