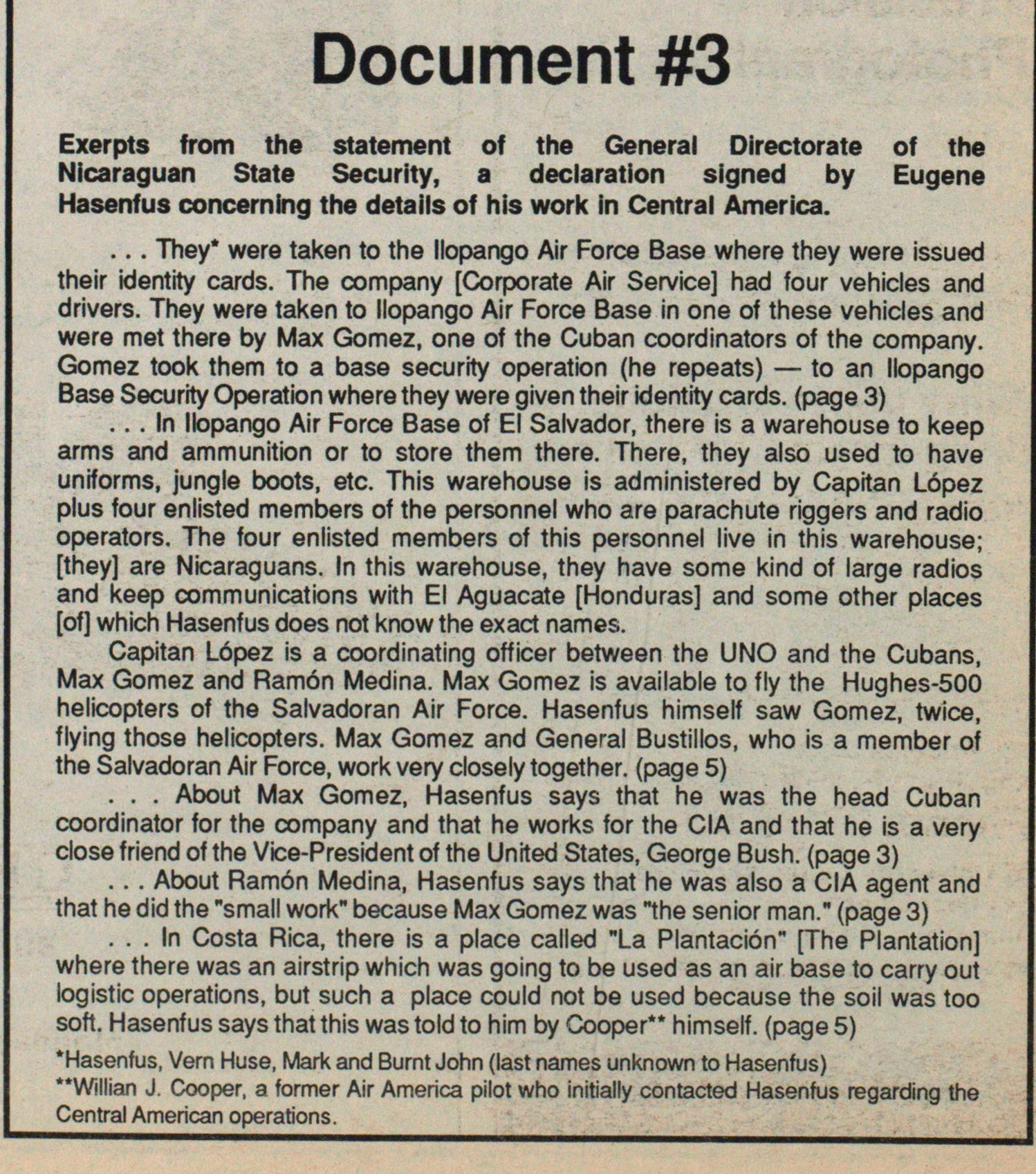 Exerpts from the statement of the General Directorate of the Nicaraguan State Security, a declaration signed by Eugene Hasenfus concerning the details of his work in Central America. . . . They were taken to the llopango Air Force Base where they were issued their dentity cards. The company [Corporate Air Service] had four vehicles and drivers. They were taken to llopango Air Force Base in one of these vehicles and were met there by Max Gómez, one of the Cuban coördinators of the company. Gómez took them to a base security operation (he repeats) - to an llopango Base Security Operation where they were given their kJentity cards. (page 3) ... In llopango Air Force Base of El Salvador, there is a warehouse to keep arms and ammunitbn or to store them there. There, they also used to have uniforms, jungle boots, etc. This warehouse is administered by Capitán López plus four enlisted members of the personnel who are parachute riggers and radio operators. The four enlisted members of this personnel live in this warehouse; [they] are Nicaraguans. In this warehouse, they have some kind of large radios and keep Communications with El Aguacate [Honduras] and some other places [of] which Hasenfus does not know the exact names. Capitán López is a coordinating officer between the UNO and the Cubans, Max Gómez and Ramón Medina. Max Gómez is available to fly the Hughes-500 helicopters of the Salvadoran Air Force. Hasenfus himself saw Gomez, twice, flying those helicopters. Max Gomez and General Bustillos, who is a member of the Salvadoran Air Force, work very closely together. (page 5) . . . About Max Gomez, Hasenfus says that he was the head Cuban coördinator for the company and that he works for the CIA and that he is a very close friend of the Vice-President of the United States, George Bush. (page 3) . . . About Ramón Medina, Hasenfus says that he was also a CIA agent and that he did the "small work" because Max Gomez was "the senior man." (page 3) ... In Costa Rica, there is a place called "La Plantación" [The Plantation] where there was an airstrip which was going to be used as an air base to carry out logistic operations, but such a place could not be used because the soil was too soft. Hasenfus says that this was told to him by Cooper" himself. (page 5) Hasenfus, Vern Huse, Mark and Burnt John (last names unknown to Hasenfus) "Willian J. Cooper, a former Air America pilot who nitially contacted Hasenfus regarding the Central American operations.