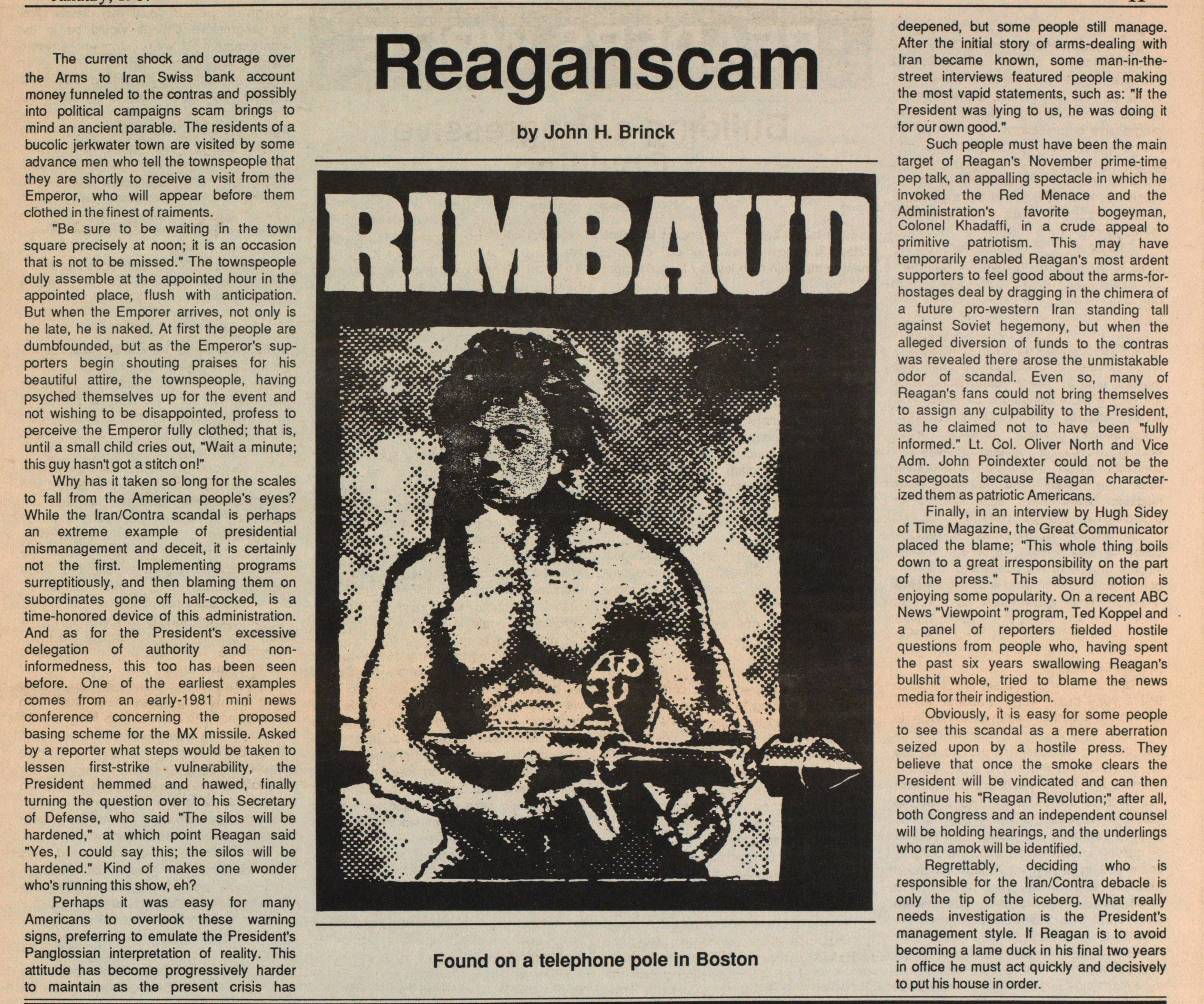 The current shock and outrage over the Arms to Iran Swiss bank account money funneled to the contras and possibly nto political campaigns scam brings to mind an ancient parable. The residents of a bucolic jerkwater town are visited by some advance men who teil the townspeople that they are shortly to receive a visit from the Emperor, who will appear before them clothed in the finest of raiments. "Be sure to be waiting in the town square precisely at noon; t is an occasion that is not to be missed." The townspeople duly assemble at the appointed hour in the appointed place, flush with anticipation. But when the Emporer arrivés, not only is he late, he is naked. At first the people are dumbfounded, but as the Emperor's supporters begin shouting praises for his beautiful attire, the townspeople, having psyched themselves up for the event and not wishing to be disappointed, profess to perceive the Emperor fully clothed; that is, until a small child cries out, "Wait a minute; this guy hasnt got a stitch on!" Why has it taken so long for the scales to fall from the American people's eyes? While the IranContra scandal is perhaps an extreme example of presidential mismanagement and deceit, it is certainly not the first. Implementing programs surreptitiously, and then blaming them on subordinates gone off half-cocked, is a time-honored device of this administration. And as for the President's excessive delegation of authority and noninformedness, this too has been seen before. One of the earliest examples comes from an early-1981 mini news conference concerning the proposed basing scheme for the MX missile. Asked by a reporter what steps would be taken to lessen first-strike . vulneability, the President hemmed and hawed, finally turning the question over to his Secretary of Defense, who said "The silos will be hardened," at which point Reagan said "Yes, I could say this; the silos will be hardened." Kind of makes one wonder who's running this show, eh? Perhaps it was easy for many Americans to overlook these warning signs, preferring to emulate the President's Panglossian interpretation of reality. This attitude has become progressively harder to maintain as the present crisis has deepened, bul some people still manage. After the initial story of arms-dealing wrth Iran became known, some man-in-thestreet interviews featured people making the most vapid statements, such as: "If the President was lying to us, he was doing t forourowngood." Such people must have been the main target of Reagan's November prime-time pep talk, an appalling spectacle in which he invoked the Red Menace and the Administration's favorfte bogeyman, Colonel Khadaffi, in a crude appeal to primitive patriotism. This may have temporarily enabled Reagan's most ardent supporters to feel good about the arms-forhostages deal by dragging in the chimera of a future pro-western Iran standing tall against Soviet hegemony, but when the alleged diversion of funds to the contras was revealed there arose the unmistakable odor of scandal. Even so, many of Reagan's fans could not bring themselves to assign any culpability to the President, as he claimed not to have been "fully nformed." Lt. Col. Oliver North and Vice Adm. John Poindexter could not be the scapegoats because Reagan characterized them as patriotic Americans. Finally, n an interview by Hugh Sidey of Time Magazine, the Great Communicator placed the blame; "This whole thing boils down to a great irresponsibility on the part of the press." This absurd notion is enjoying some popularity. On a recent ABC News "Viewpoint " program, Ted Koppel and a panel of reporters fielded hostile questions from people who, having spent the past six years swallowing Reagan's bullshit whole, tried to blame the news media fortheir indigestión. Obviously, it is easy for some people to see this scandal as a mere aberration seized upon by a hostile press. They believe that once the smoke clears the President will be vindicated and can then continue his "Reagan Revolution;" after all, both Congress and an independent counsel will be holding hearings, and the underlings who ran amok will be identrfied. Regrettably, deciding who is responsible for the IranContra debacle is only the tip of the iceberg. What really needs investigation is the President's management style. If Reagan is to avoid becoming a lame duck in his final two years in office he must act quickly and decisiveiy to put his house in order. Found on a telephone pole in Boston