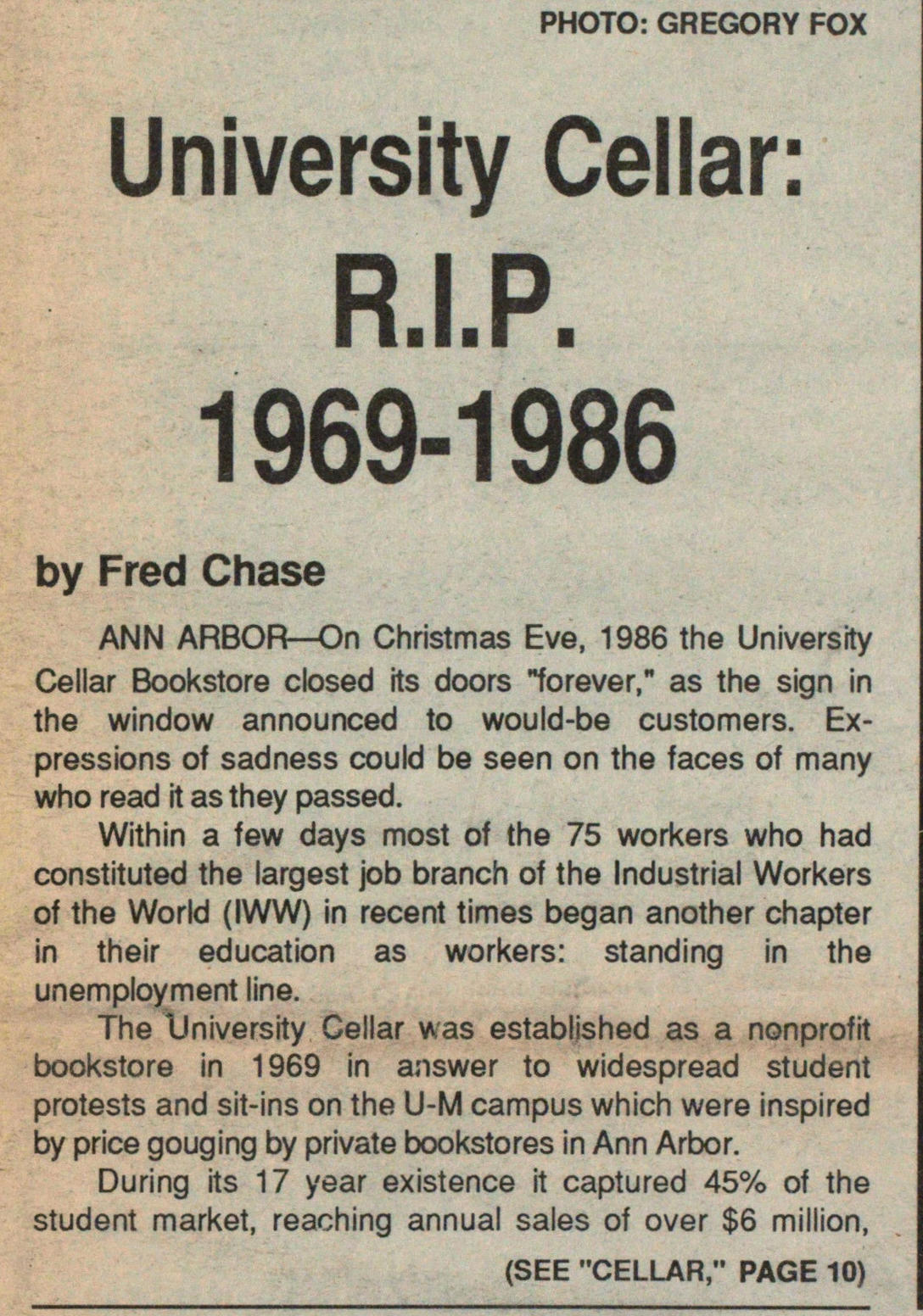 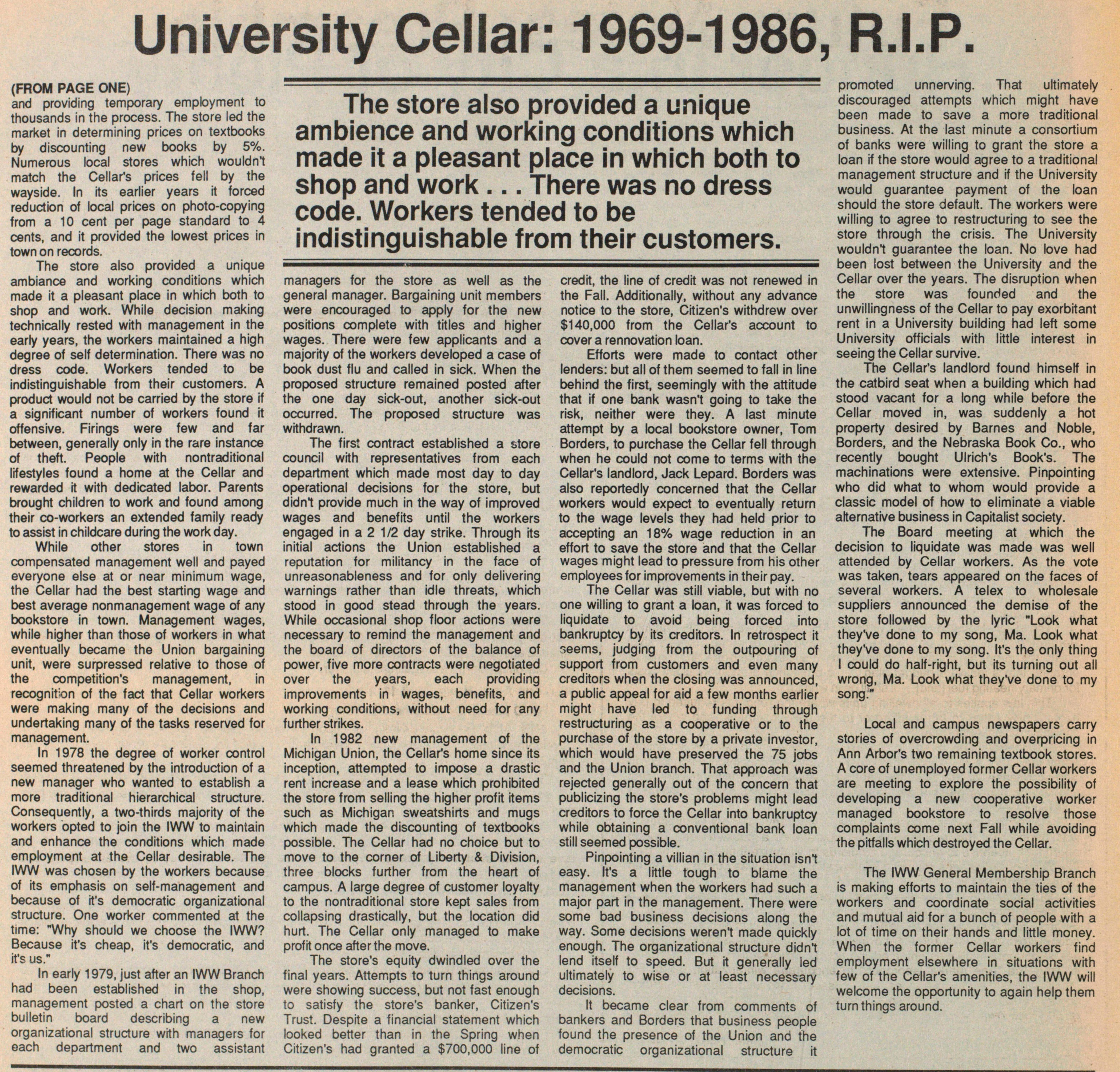 ANN ARBOR--On Christmas Eve, 1986 the University Cellar Bookstore closed its doors "forever," as the sign in the window announced to would-be customers. Expressions of sadness could be seen on the faces of many who read it as they passed.

Within a few days most of the 75 workers who had constituted the largest job branch of the Industrial Workers of the World (IWW) in recent times began another chapter in their education as workers: standing in the unemployment line.

The University Cellar was established as a nonprofit bookstore in 1969 in answer to widespread students protests and sit-ins on the U-M campus which were inspired by price gouging by private bookstores in Ann Arbor.

During its 17 year existence it captured 45% of the student market, reaching annual sales of over $6 million,

The store also provided a unique ambience and working conditions which mad it a pleasant place in which both to shop and work...There was no dress code. Workers tended to be indistinguishable from their customers.

and providing temporary employment to thousands in the process. The store led the market in determining prices on textbooks by discounting new books by 5%. Numerous local stores which wouldn't match the Cellar's prices fell by the wayside. In its earlier years it forced reduction of local prices on photo-copying from a 10 cent per page standard to 4 cents, and it provided the lowest prices in town on records.

The store also provided a unique ambiance and working conditions which made it a pleasant place in which both to shop and work. While decision making technically rested with management in the early years, the workers maintained a high degree of self determination. There was no dress code. Workers tended to be indistinguishable from their customers. A product would not be carried by the store if a significant number of workers found it offensive. Firings were few and far between, generally only in the rare instance of theft. People with nontraditional lifestyles found a home at the Cellar and rewarded it with dedicated labor. Parents brought children to work and found among their co-workers an extended family ready to assist in childcare during the work day.

While other stores in town compensated management well and payed everyone else at or near minimum wage, the Cellar had the best starting wage and best average non-management wage of any bookstore in town. Management wages, while higher than those or workers in what eventually became the Union bargaining unit, were surpressed relative to those of the competition's management, in recognition of the fact that Cellar workers were making many of the decisions and undertaking many of the tasks reserved for management.

In 1978 the degree of worker control seemed threatened by the introduction of a new manager who wanted to establish a more traditional hierarchical structure. Consequently, a two-thirds majority of the workers opted to join the IWW to maintain and enhance the conditions which made employment at the Cellar desirable. The IWW was chosen by the workers because of its emphasis on self-management and because of it's democratic organizational structure. One worker commented at the time: "Why should we choose the IWW? Because it's cheap, it's democratic, and it's us."

In early 1979, just after an IWW Branch had been established in the shop, management posted a chart on the store bulletin board describing a new organizational structure with managers for each department and two assistant managers for the store as well as the general manager. Bargaining unit members were encouraged to apply for the new positions complete with titles and higher wages. There were few applicants and a majority of the workers developed a case of book dust flu and called in sick. When the proposed structure remained posted after the one day sick-out, another sick-out occurred. The proposed structure was withdrawn.

The first contract established a store council with representatives from each department which made most day to day operational decisions for the store, but didn't provide much in the way of improved wages and benefits until the workers engaged in a 2 1/2 day strike. Through its initial actions the Union established a reputation for militancy in the face of unreasonableness and for only delivering warnings rather than idle threats, which stood in good stead through the years. While occasional shop floor actions were necessary to remind the management and the board of directors of the balance of power, five more contracts were negotiated over the years, each providing improvements in wages, benefits, and working conditions, without need for any further strikes.

In 1982 new management of the Michigan Union, the Cellar's home since its inception, attempted to impose a drastic rent increase and a lease which prohibited the store from selling the higher profit items such as Michigan sweatshirts and mugs which made the discounting of textbooks possible. The Cellar had no choice but to move to the corner of Liberty & Division, three blocks further from the heart of campus. A large degree of customer loyalty to the nontraditional store kept sales from collapsing drastically, but the location did hurt. The Cellar only managed to make profit once after the move.

The store's equity dwindled over the final years. Attempts to turn things around were showing success, but not fast enough to satisfy the store's banker, Citizen's Trust. Despite a financial statement which looked better than in the Spring when Citizen's had granted a $700,000 line of credit, the line of credit was not renewed in the Fall. Additionally, without any advance notice to the store, Citizen's withdrew over $140,000 from the Cellar's account to cover a renovation loan.

Efforts were made to contact other lenders: but all of them seemed to fall in line behind the first, seemingly with the attitude that is one bank wasn't going to take the risk, neither were they. A last minute attempt by a local bookstore owner, Tom Borders, to purchase the Cellar fell through when he could not come to terms with the Cellar's landlord, Jack Lepard. Borders was also reportedly concerned that the Cellar workers would expect to eventually return to the wage levels they had held prior to accepting an 18% wage reduction in an effort to save the store and that the Cellar wages might lead to pressure from his other employees for improvements in their pay.

The Cellar was still viable, but with no one wiling to grant a loan, it was forced to liquidate to avoid being forced into bankruptcy by its creditors. In retrospect it seems, judging from the outpouring of support from customers and even many creditors when the closing was announced, a public appeal for aid a few months earlier might have led to funding through restructuring as a cooperative or to the purchase of the store by a private investor, which would have preserved the 75 jobs and the Union branch. That approach was rejected generally out of the concern that publicizing the store's problems might lead creditors to force the Cellar into bankruptcy while obtaining a conventional bank loan still seemed possible.

Pinpointing a villain in the situation isn't easy. It's a little tough to blame the management when the workers had such a major part in the management. There were some bad business decisions along the way. Some decisions weren't made quickly enough. The organizational structure didn't lend itself to speed. But it generally led ultimately to wise or at least necessary decisions.

It became clear from comments of bankers and Borders that business people found the presence of the Union and the democratic organizational structure it promoted unnerving. That ultimately discouraged attempts which might have been made to save a more traditional business. At the last minute a consortium of banks were willing to grant the store a loan if the store would agree to a traditional management structure and if the University would guarantee payment of the loan should the store default. The workers were willing to agree to restructuring to see the store through the crisis. The University wouldn't guarantee the loan. No love had been lost between the University and the Cellar over the years. The disruption when the store was founded and the unwillingness of the Cellar to pay exorbitant rent in a University building had left some University officials with little interest in seeing the Cellar survive.

The Cellar's landlord found himself in the catbird seat when a building which had stood vacant for a long while before the Cellar moved in, was suddenly a hot property desired by Barnes and Noble, Borders, and the Nebraska Book Co., who recently bought Ulrich's Book's. The machinations were extensive. Pinpointing who did what to whom would provide a classic model of how to eliminate a viable alternative business in Capitalist society.

Local and campus newspapers carry stories of overcrowding and overpricing in Ann Arbor's two remaining textbook stores. A core of unemployed former Cellar workers are meeting to explore the possibility of developing a new cooperative worker managed bookstore to resolve those complaints come next Fall while avoiding the pitfalls which destroyed the Cellar.

The IWW General Membership Branch is making efforts to maintain the ties of the workers and coordinate social activities and mutual aid for a bunch of people with a lot of time on their hands and little money. When the former Cellar workers find employment elsewhere in situations with few of the Cellar's amenities, the IWW will welcome the opportunity to again help them turn things around.