Michigan Quest: $3.8 Million In Humanitarian Aid For The Nicaraguan People 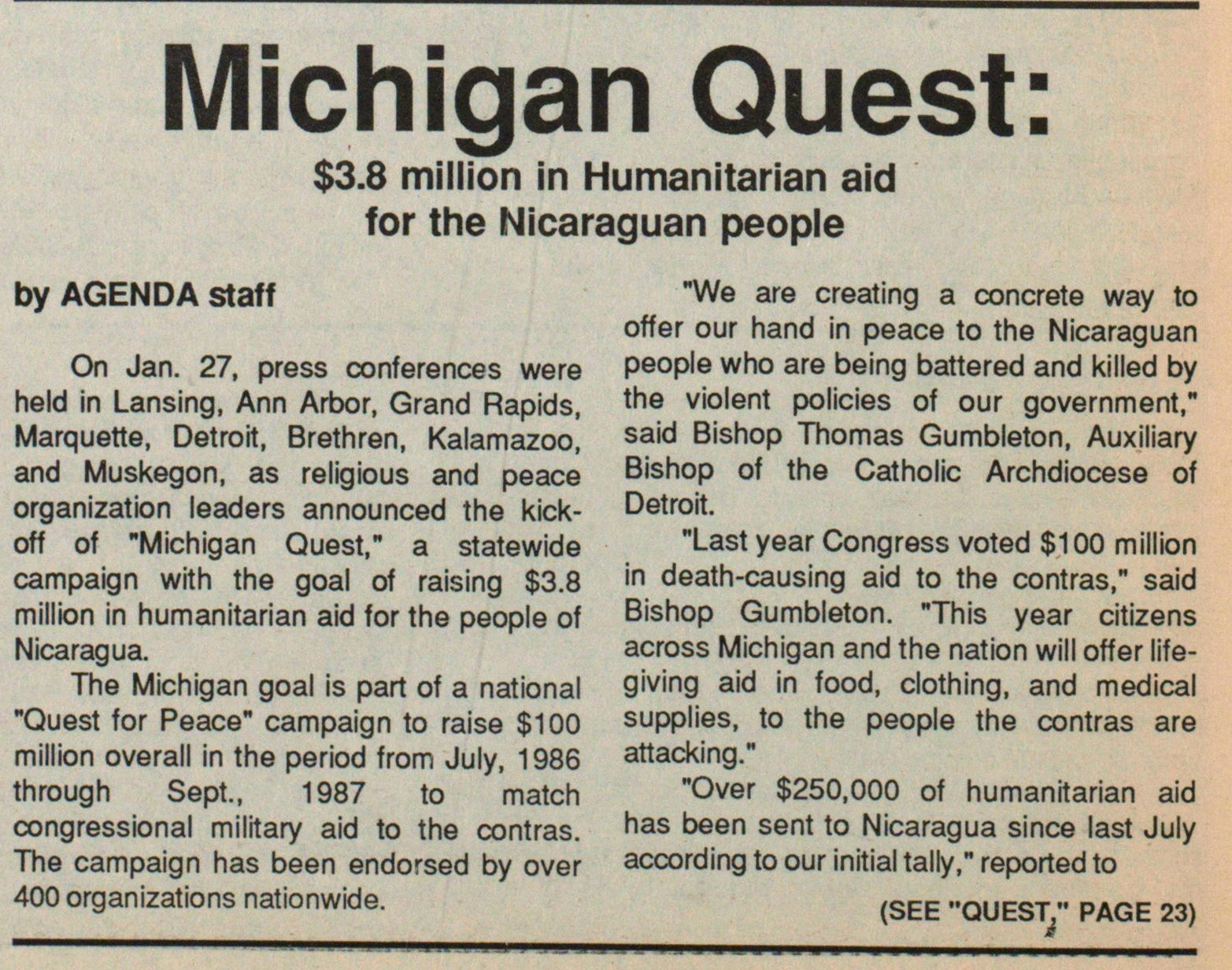 On Jan. 27, press conferences were held in Lansing, Ann Arbor, Grand Rapids, Marquette, Detroit, Brethren, Kalamazoo, and Muskegon, as religious and peace organization leaders announced the kickoff of "Michigan Quest," a statewide campaign with the goal of raising $3.8 million in humanitarian aid for the people of Nicaragua. The Michigan goal is part of a national "Quest for Peace" campaign to raise $100 million overall in the period from July, 1986 through Sept., 1987 to match congressional military aid to the contras. The campaign has been endorsed by over 400 organizations nationwide. "We are creating a concrete way to offer our hand in peace to the Nicaraguan people who are being battered and killed by the violent policies of our government," said Bishop Thomas Gumbleton, Auxiliary Bishop of the Catholic Archdiocese of Detroit. "Last year Congress voted $100 million in death-causing aid to the contras," said Bishop Gumbleton. "This year citizens across Michigan and the nation will offer lifegiving aid in food, clothing, and medical supplies, to the people the contras are attacking." "Over $250,000 of humanitarian aid has been sent to Nicaragua since last July according to our initial tally," reported to (SEE "QUESTj" PAGE 23) QUEST (FR0MPAGE8) Jim Burchell of Ann Arbor, state coördinator for Michigan Quest. He also said that 40 Michigan organizations have endorsed Michigan Quest. About $60,000 of that figure has been raised by Ann Arbor organizations including AMISTAD, Nicaragua Medical Aid Project, the Ann Arbor Central America Sister City Task Force, and the weekly Beans-and-Rice Dinners. Some of the humanitarian aid raised will be shipped to Nicaragua through the Quixote Center, an independent Catholic-based social justice organization located outside of Washington, D.C. The Quixote Center has staff people in Nicaragua who directly channel the aid to people in need in locations throughout the country. For more information, contact: Michigan Quest for Peace, 1910 Hill Street, Ann Arbor, Ml 481 04, (313)769-5051.