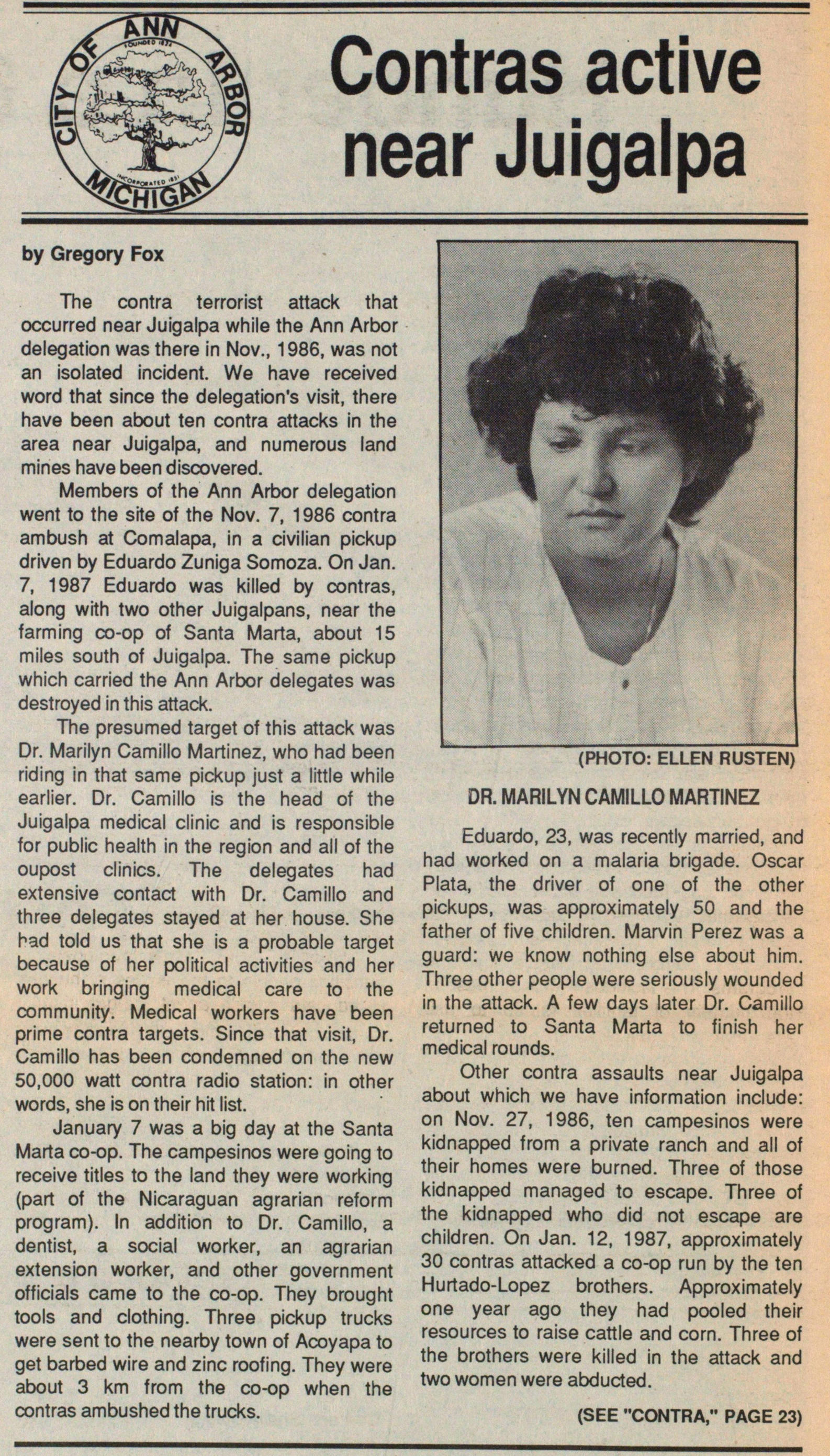 The contra terrorist attack that occurred near Juigalpa while the Ann Arbor delegation was there in Nov., 1986, was not an solated incident. We have received word that since the delegation's visit, there have been about ten contra attacks in the area near Juigalpa, and numerous land mines have been discovered. Members of the Ann Arbor delegation went to the site of the Nov. 7, 1986 contra ambush at Comalapa, in a civilian pickup driven by Eduardo Zuniga Somoza. On Jan. 7, 1987 Eduardo was killed by contras, along with two other Juigalpans, near the farm ing co-op of Santa Marta, about 15 miles south of Juigalpa. The same pickup which carried the Ann Arbor delegates was destroyed in this attack. The presumed target of this attack was Dr. Marilyn Camillo Martínez, who had been riding in that same pickup just a little while earlier. Dr. Camillo is the head of the Juigalpa medical clinic and is responsible for public health in the región and all of the oupost clinics. The delegates had extensive contact with Dr. Camillo and three delegates stayed at her house. She had told us that she is a probable target because of her political activities and her work bringing medical care to the community. Medical workers have been prime contra targets. Since that visit, Dr. Camillo has been condemned on the new 50,000 watt contra radio station: in other words, she is on their hit list. January 7 was a big day at the Santa Marta co-op. The campesinos were going to receive titles to the land they were working (part of the Nicaraguan agrarian reform program). In addition to Dr. Camillo, a dentist, a social worker, an agrarian extensión worker, and other government officials carne to the co-op. They brought tools and clothing. Three pickup trucks were sent to the nearby town of Acoyapa to get barbed wire and zinc roofing. They were about 3 km from the co-op when the contras ambushed the trucks. Eduardo, 23, was recently married, and had worked on a malaria brigade. Oscar Plata, the driver of one of the other pickups, was approximately 50 and the father of five children. Marvin Perez was a guard: we know nothing else about him. Three other people were seriously wounded in the attack. A few days later Dr. Camillo returned to Santa Marta to finish her medical rounds. Other contra assaults near Juigalpa about which we have information include: on Nov. 27, 1986, ten campesinos were kidnapped from a private ranch and all of their homes were burned. Three of those kidnapped managed to escape. Three of the kidnapped who did not escape are children. On Jan. 12, 1987, approximately 30 contras attacked a co-op run by the ten Hurtado-Lopez brothers. Approximately one year ago they had pooled their resources to raise cattle and corn. Three of the brothers were killed in the attack and two women were abducted. (SEE "CONTRA," PAGE 23) DR. MARILYN CAMILLO MARTÍNEZ CONTRA (FROM PAGE 8) The next day Nicaraguan soldiers located the group and n the ensuing fight, the two women were able to escape. They reported that they were raped and had been torced to carry supplies and ammunition. On the night of Jan. 13, 1987 a state farm, San Juan de Dios, was attacked by contras. Five campesinos on guard duty were killed and the homes were burned. The families are now refugees and t is considered too dangerous for them to return to the farm. $40 million of the $100 million in overt aid to the contra terrorists is up for a vote in Congress around mid-February. Our sister city is directly threatened by this funding for the contra terrorists. Congressperson Cari Pursell has been a consistent supporter of the contras. He did, however, state publicly that he hopes the contras dont attack Juigalpa. This is a good time to point out to him that he can protect the sister city of the biggest city in his district by voting against any aid for the contras. You might also remind Pursell of his Aug., 1985 promise to particípate in a public forum on his Central American policy. Thus far he has refused to honor his promise to the people of Ann Arbor. PurselPs address is: 1414 Longworth Building, Washington, D.C. 20515.