Proposal B: The Housing Millage Yes On B Noon B 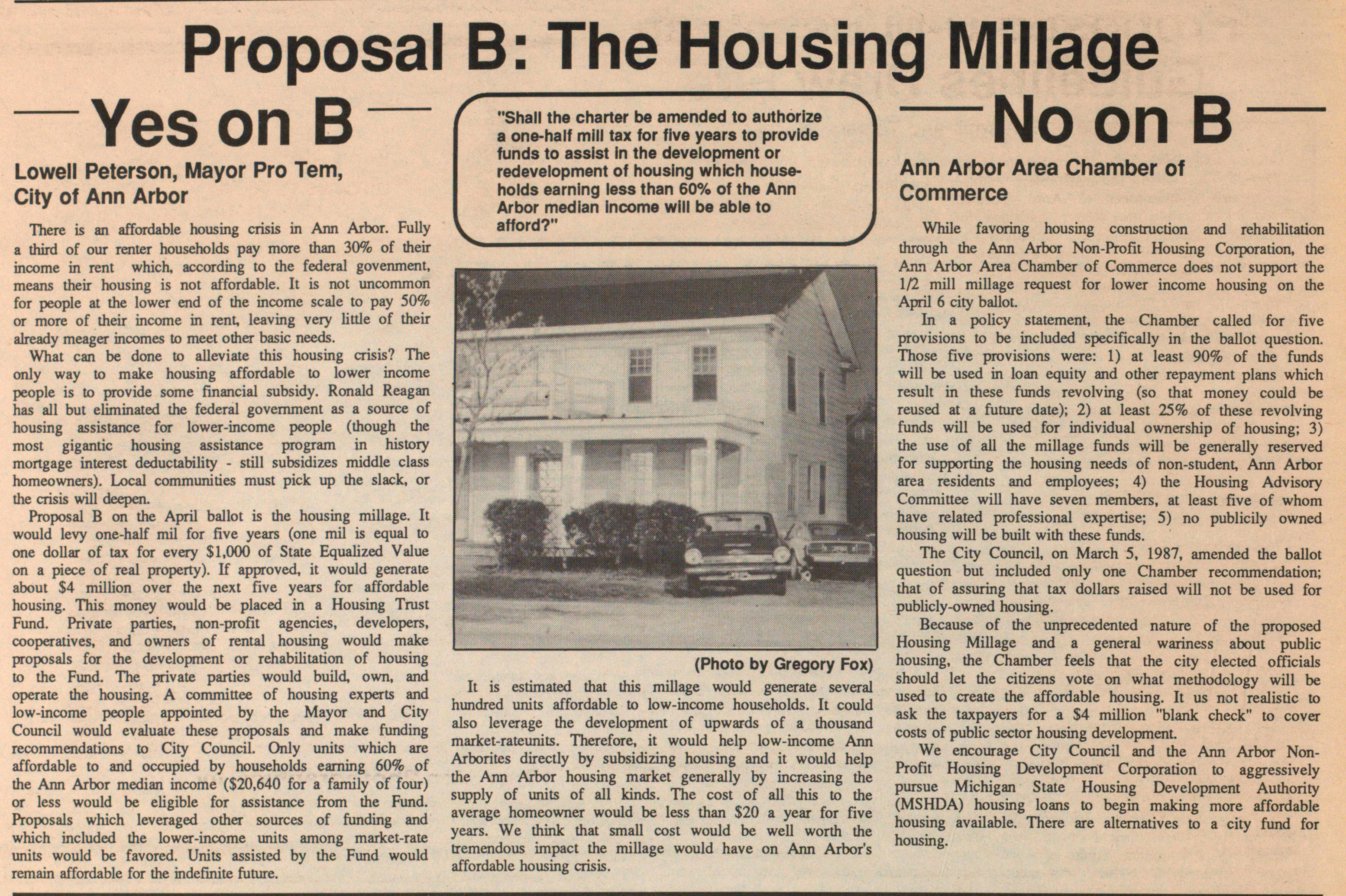 Lowell Peterson, Mayor Pro Tem, City of Ann Arbor Ann Arbor Área Chamber of Commerce There is an affordable housing crisis in Ann Arbor. Fully a third of our renter households pay more than 30% of their income in rent which, according to the federal govenment, means their housing is not affordable. It is not uncommon for people at the lower end of the income scale to pay 50% or more of their income in rent, leaving very little of their already meager incomes to meet other basic needs. What can be done to aJleviate this housing crisis? The only way to make housing affordable to lower income people is to provide some financia! subsidy. Ronald Reagan has all but eliminated the federal government as a source of housing assistance for lower-income people (though the most gigantic housing assistance program in history mortgage interest deductability - still subsidizes middle class homeowners). Local communities must piek up the slack, or the crisis will deepen. Proposal B on the April ballot is the housing millage. It would levy one-half mil for five years (one mil is equal to one dollar of tax for every $1,000 of State Equalized Value on a piece of real property). If approved, it would genérate about $4 million over the next five years for affordable housing. This money would be placed in a Housing Trust Fund. Private partios, non-profit agencies, developers, cooperatives, and owners of rental housing would make proposals for the development or rehabilitation of housing to the Fund. The private parties would build, own, and opérate the housing. A committee of housing experts and low-income people appointed by the Mayor and City Council would evalúale these proposals and make funding recommendations to City Council. Only units which are affordable to and occupied by households eaming 60% of the Ann Arbor median income ($20,640 for a family of four) or less would be eligible for assistance from the Fund. Proposals which leveraged other sources of funding and which included the lower-income units among market-rate units would be favored. Units assisted by the Fund would remain affordable for the indefinite future. It is estimated that this millage would genérate several hundred units affordable to low-income houscholds. It could also leverage the development of upwards of a thousand market-rateunits. Therefore, it would help low-income Ann Arborites directly by subsidizing housing and it would help the Ann Arbor housing market generally by increasing the supply of units of all kinds. The cost of all this to the average homeowner would be less than $20 a year for five years. We think that small cost would be well worth the tremendous impact the millage would have on Ann Arbor's affordable housing crisis. While favoring housing construction and rehabilitation through the Ann Arbor Non-Profït Housing Corporation, the Ann Arbor Area Chamber of Commerce does not support the 12 mili millage request for lower income housing on the April 6 city ballot. In a policy statement, the Chamber called for five provisions to be included specifically in the ballot question. Those five provisions were: 1) at least 90% of the funds will be used in loan equity and other repayment plans which result in these funds revolving (so that money could be reused at a future date); 2) at least 25% of these revolving funds will be used for individual ownership of housing; 3) the use of all the millage funds will be generally reserved for supporting the housing needs of non-student, Ann Arbor area residents and employees; 4) the Housing Advisory Committee will have seven members, at least five of whom have related professional expertise; 5) no publicily owned housing will be built with these funds. The City Council, on March 5, 1987, amended the ballot question but included only one Chamber recommendation; that of assuring that tax dollars raised will not be used for publicly-owned housing. Because of the unprecedented nature of the proposed Housing Millage and a general wariness about public housing, the Chamber feels that the city elected officials should let the citizens vote on what methodology will be used to créate the affordable housing. It us not realistic to ask the taxpayers for a $4 million "blank check" to cover costs of public sector housing development. We encourage City Council and the Ann Arbor NonProfit Housing Development Corporation to aggressively pursue Michigan State Housing Development Authority (MSHDA) housing loans to begin making more affordable housing available. There are alternatives to a city fund for housing. "Shall the charter be amended to authorize a one-half mili tax for five years to provide funds to assist In the development or redevelopment of housing which households earning less than 60% of the Ann Arbor median income will be able to . afford?" i