A Day In The Life Of A Brigadista 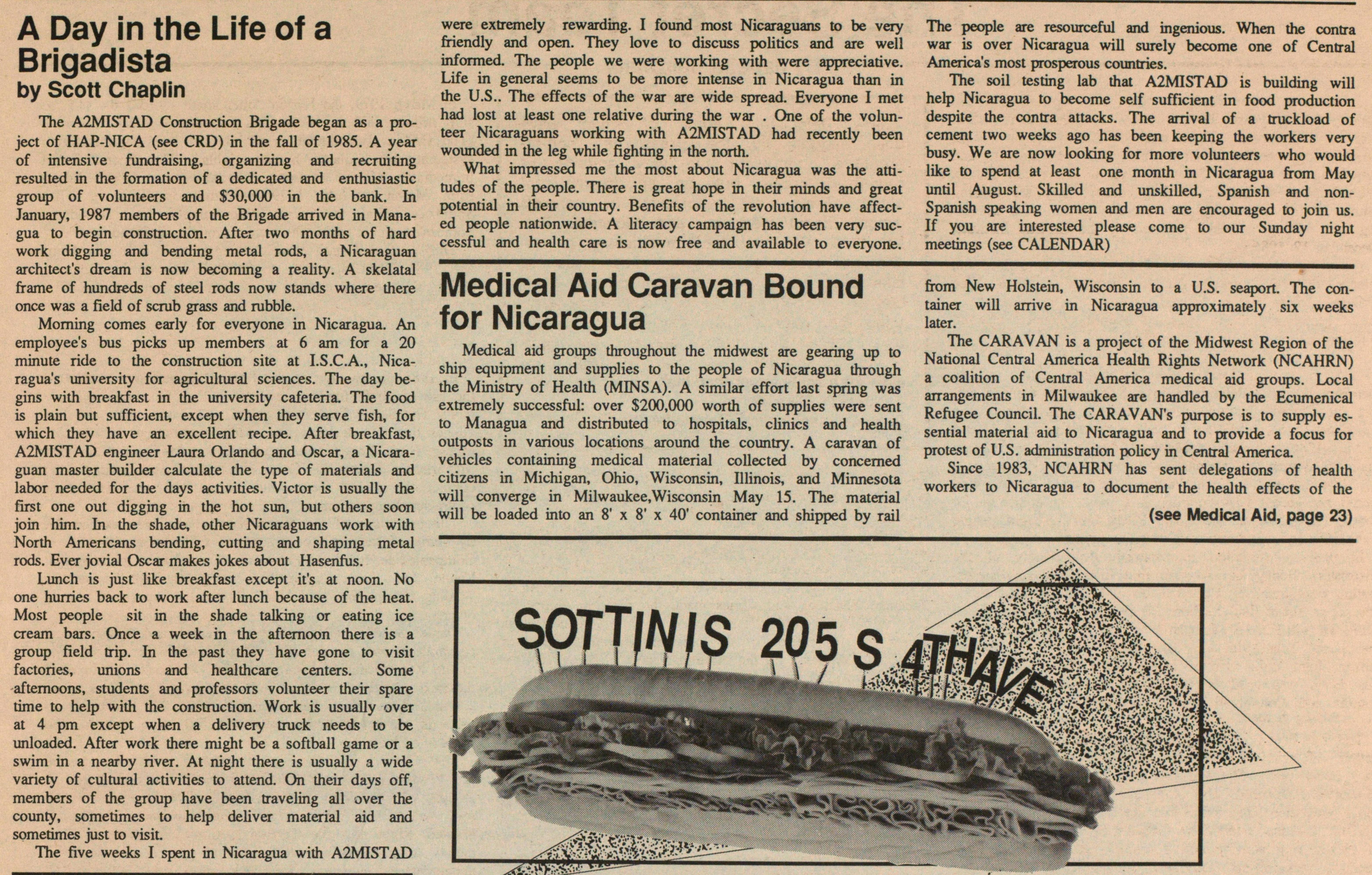 The A2MISTAD Construction Brigade began as a project of HAP-NICA (see CRD) in the fall of 1985. A year of intensive fundraising, organizing and recruiting resulted in the formation of a dedicated and enthusiastic group of volunteers and $30,000 in the bank. In January, 1987 members of the Brigade arrived in Managua to begin construction. After two months of hard work digging and bending metal rods, a Nicaraguan architect's dream is now becoming a reality. A skelatal frame of hundreds of steel rods now stands where there once was a field of scrub grass and rubble.

Morning comes early for everyone in Nicaragua. An employee's bus picks up members at 6 am for a 20 minute ride to the construction site at I.S.C.A., Nicaragua's university for agricultural sciences. The day begins with breakfast in the university cafeteria. The food is plain but sufficient, except when they serve fish, for which they have an excellent recipe. After breakfast, A2MISTAD engineer Laura Orlando and Oscar, a Nicaraguan master builder calculate the type of materials and labor needed for the days activities. Victor is usually the first one out digging in the hot sun, but others soon join him. In the shade, other Nicaraguans work with North Americans bending, cutting and shaping metal rods. Ever jovial Oscar makes jokes about Hasenfus.

Lunch is just like breakfast except it's at noon. No one hurries back to work after lunch be cause of the heat. Most people sit in the shade talking or eating ice cream bars. Once a week in the afternoon there is a group field trip. In the past they have gone to visit factories, unions and healthcare centers. Some afternoons, students and professors volunteer their spare time to help with the construction. Work is usually over at 4 pm except when a delivery truck needs to be unloaded. After work there might be a softball game or a swim in a nearby river. At night there is usually a wide variety of cultural activities to attend. On their days off, members of the group have been traveling all over the county, sometimes to help deliver material aid and sometimes just to visit.

The five weeks I spent in Nicaragua with A2MISTAD were extremely rewarding. I found most Nicaraguans to be very friendly and open. They love to discuss politics and are well informed. The people we were working with were appreciative. Life in general seems to be more intense in Nicaragua than in the U.S.. The effects of the war are wide spread. Everyone I met had lost at least one relative during the war. One of the volunteer Nicaraguans working with A2MISTAD had recently been wounded in the leg while fighting in the north.

What impressed me the most about Nicaragua was the attitudes of the people. There is great hope in their minds and great potential in their country. Benefits of the revolution have affected people nationwide. A literacy campaign has been very successful and health care is now free and available to everyone. The people are resourceful and ingenious. When the contra war is over Nicaragua will surely become one of Central America's most prosperous countries.

The soil testing lab that A2MISTAD is building will help Nicaragua to become self sufficient in food production despite the contra attacks. The arrival of a truckload of cement two weeks ago has been keeping the workers very busy. We are now looking for more volunteers who would like to spend at least one month in Nicaragua from May until August. Skilied and unskilled, Spanish and nonSpanish speaking women and men are encouraged to join us. If you are interested please come to our Sunday night meetings (see CALENDAR)