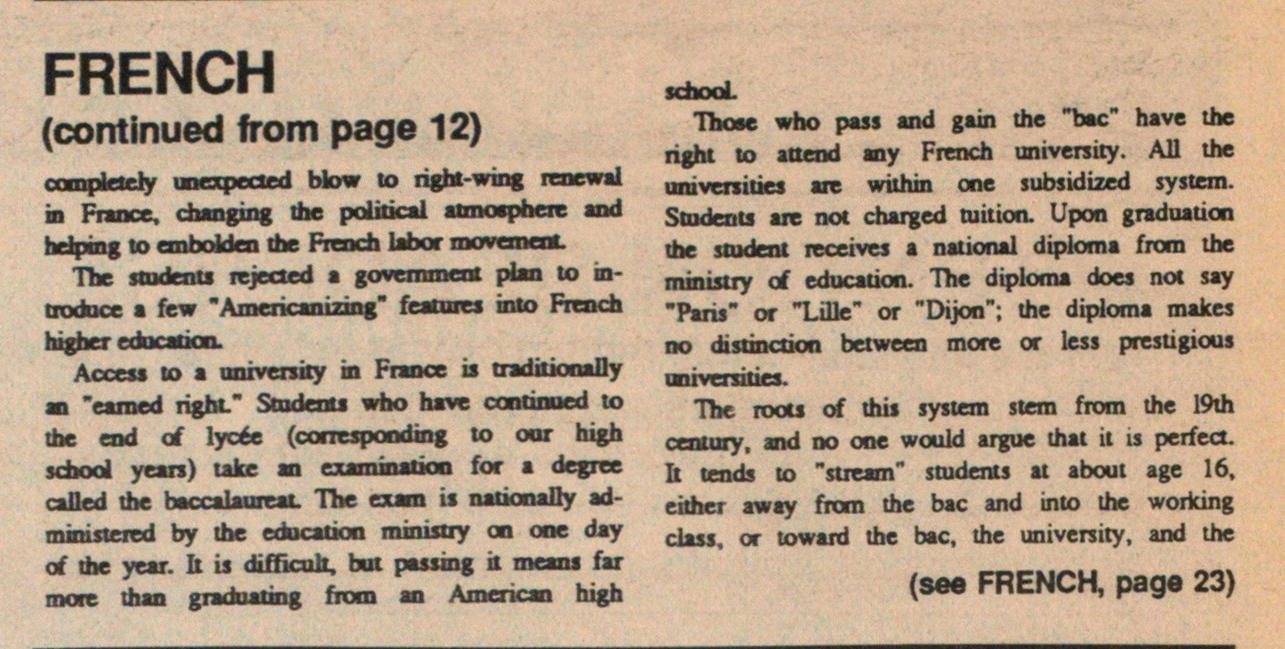 If the American media had not been filled with news of the Iran armscontra funds affair in November and December, we would have heard much more than we did about the French student movement. The movement mobilized over a million students, achieved all its objectives, and traumatized the new right-wing cabinet undcr prime minister Jacques Chirac. Our press did report the size of the biggest demonstrations and put the emphasis on incidents of violence. In doing so, American correspondents were only reading and copying the French right-wing press, especially "Le Figaro." From reading the American papers it was impossible to leam the motiva-tions of the participants (a New York Times' correspondent actually wrote that the movement was a "puzzle"). To understand what happened, we have to remember that Reaganism is not just a U.S. phenomenon. It is also an international doctrine of right-wing renewal. Thatcher in England, Kohl in Germany, and Nakasone in Japan all work to give national faces to right-wing renewal in their own countries. In different ways, tliey all point to the U.S. as a "model" for the future of their own countries'; although Thatcher is the most rcckless and Nakasone is the most careful. After the French elections of March, 1986 gave a majority to rightwing parties in the National Assembly, Jacques Chirac's new govemment becamc the latest national placement of this doctrine. But the sudden mushrooming of a French student movement struck a (see FRENCH, page 16) FRENCH (continued f rom page 12) complaily unnipmrd blow lo nght-winj ranewal in France, changuig Ihc potincal miotphcit nd hetpmg lo anbolden the Frcnch labor nmot The mdenu icjeoed goncmmea plan to mnotkice a few "Ameñcanizmg" feanncs mlo French higber educaran. Acceu tt a umvmity in France u tradilionaDy m "eamed righL" Smdenu who have rrarirmrd lo the end erf lycée (uieipcniliiit to oor high school yean) uke an rraminalifai for a degree aOed the baccalauiEaL The exam U nalinnalh ad mmaaed by the firtinn núnisny on one day of the yeai. Il ii diffkak. bot paumf a manu far more dun gndaaung fiom an American high KfaooL ThoK who pass and gun the "b.c" have the nftht to altend any French univercity. AU the univrniliei irc wühin one sublidized syslem. Smdents aic not charged luition. Upon gradualion the student receives a nacional diploma from Uk mmistry of educalkn. The dipkxna does nol sy "Puil" or "LiDe" of "Dijon"; the diploma makes no dijtmcuon between more or leu prestigieus unmnnks. The roou of thii jystem stem from the 19th couury, and no one would argue that it is perfect. It lends to "stream" studenu at about age 16, eidter away from the bic and into the working ciass, or toward the bac, the university, and the (see FRENCH, page 23) FRENCH (continued f rom page 16) middle class. The baccalauicat exam itself is a personal ordeal that has limitcd valué in measuring a person's abilitics. And at the universily, free tuition without scholarships does not solve the problem faced by poorer students struggling to study and survive. Yet the present system tends to be equal. It has been an avenue of social mobility for determined working class students for over a century. The Chirac govemment's plan for "university reform" was an attack, not on the whole system, but only on its tendency toward equality. This attack was justified in the right-wing press by pointing to the "American model." According to the plan, a university administration would be allowed to piek and choose among qualificd students who want admission. The national diploma would be replaced by diplomas from each university. Allhough the text of the proposed law is timid and ambiguous, the direction in which it points is clear to students, and the comments of the supporters of the bill make it even more clear. Students would be gradually converted into an "applications pool," American style. Univer-siües would begin to define their separate institutional identities, their specialties, their stu-dent "types." Over time, universilies would come to form a hierarchy based on prestige and "ratings," just as in the U.S. University students throughout France began to organize against this "reform" in early November. As the movement grew, it was joined (especially in Paris) by large numbers of young lycée students whose future university education was threatened. On Dec. 4 belween 250,000 and 500,000 students converged on Paris to demand that the "reform" be dropped unconditionally (demonstralions in France mobilized about 1 mil-lion). That evening in Paris the pólice fired tear gas grenades horizontally at point-blank range (against pólice regulations) landing near the marshals of the demonstration and enraging some in the crowd. In the ensuing violence three student were injured and one student died. Over 10 pólice were injured - a higher toll than that of the entire student movement of May, 1968. The pólice action, viewed on national televisión, backfired against the government. Though the pólice had sought to make the sludents react violently in order to provoke public disapproval, public opinión instead turned sharply against the govemmenL Three days later Chirac capitulated and wilhdrew the "reform" proposal. The studenls won their own, dearly defined objective. But without intending to they also accomplishcd much more. Since the success of the student movement the Chirac govemment has been on the defensive. The students have beatcn back one aspect of the right's "American model", a model that also includes the privatization of nationally owned industries at bargain prices, the weakening of social services, the freezing of wages, the creation of private-enterprise prisons, and so on. Now it is up to the rest of French society to fight off the model as a whole. In this process, everything in the U.S. that accelerates the collapse of Reaganism aids the people of other societies as well, not only in the Third World, but also in the industrial countries.