Network News And The Image Of A President 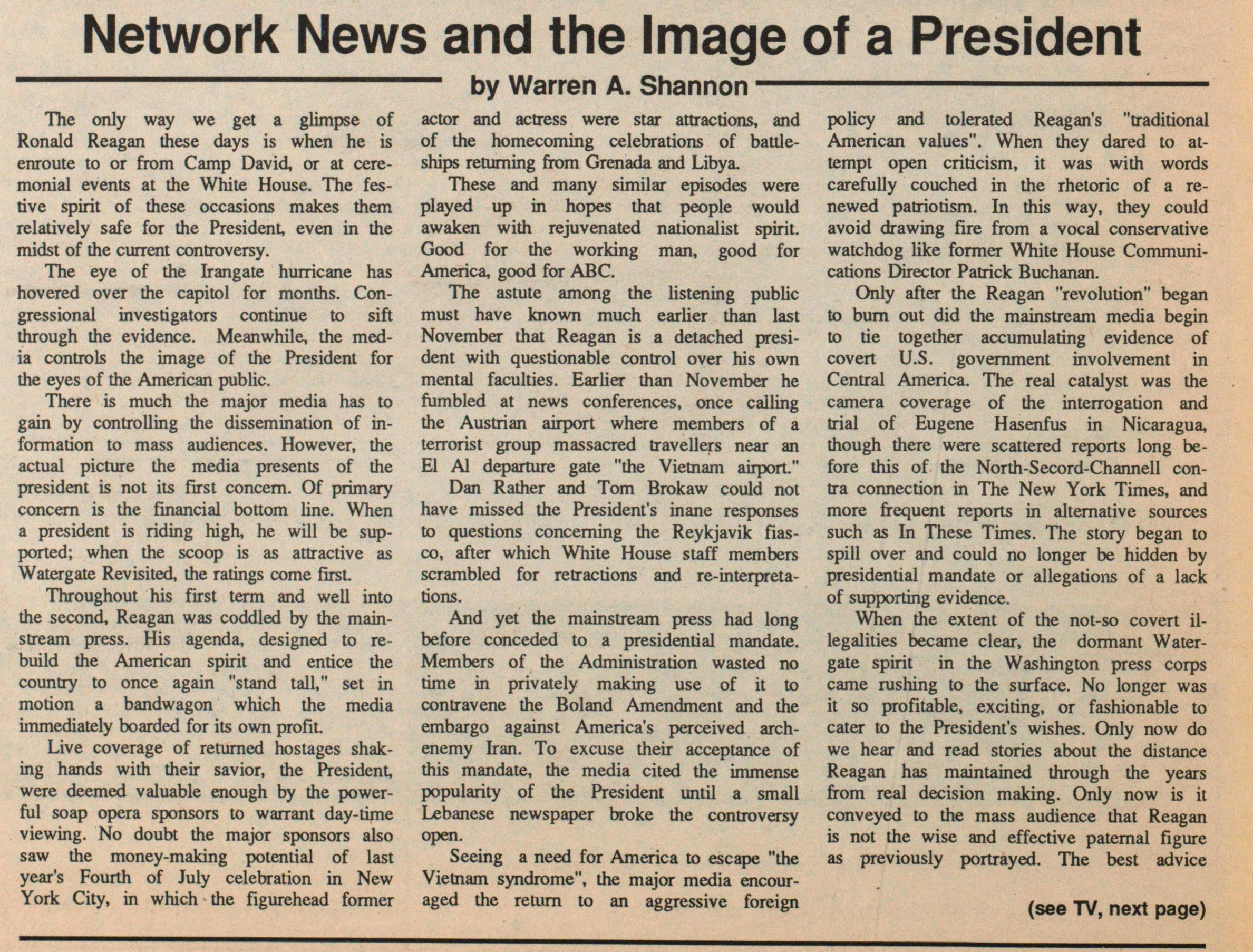 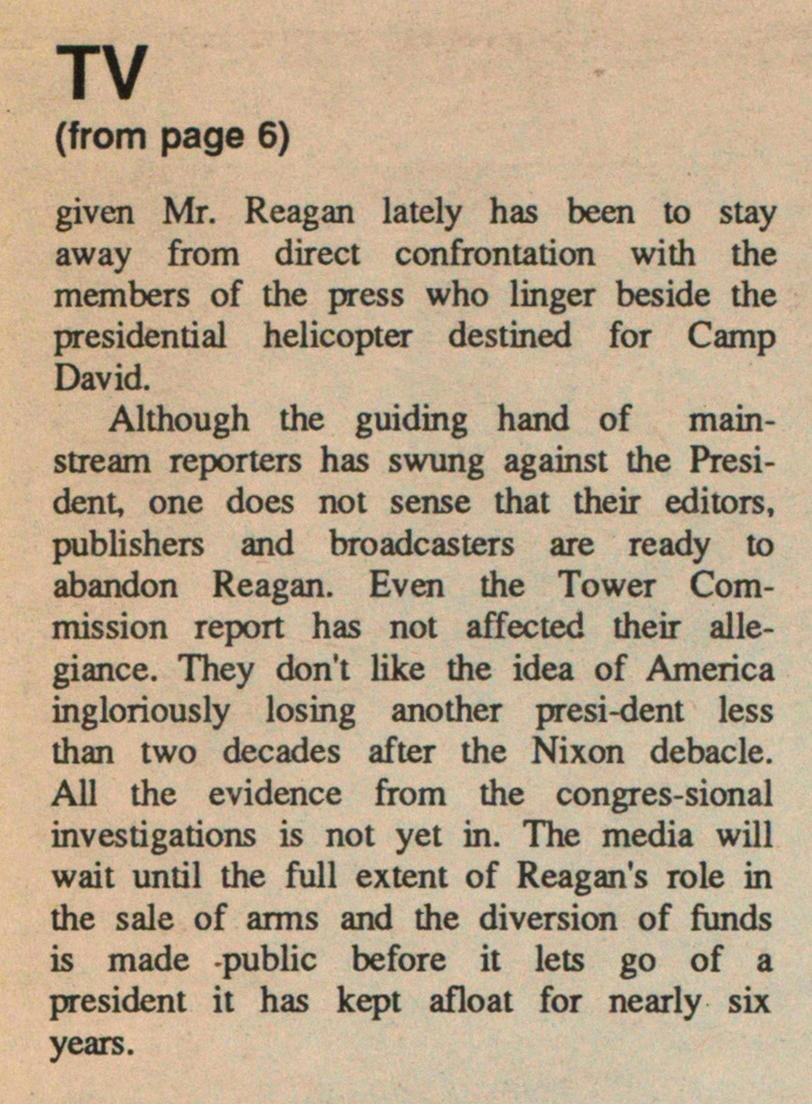 The only way we get a glimpse of Ronald Reagan these days is when he is enroute to or from Camp David, or at ceremonial events at the White House. The festive spirit of these occasions makes them relatively safe for the President, even in the midst of the current controversy. The eye of the Irangate hurricane has hovered over the capítol for months. Congressional investigators continue to sift through the evidence. Meanwhile, the media controls the image of the President for the eyes of the American public. There is much the major media has to gain by controlling the dissemination of information to mass audiences. However, the actual picture the media presents of the president is not its first concern. Of primary concern is the financial bottom line. When a president is riding high, he will be supported; when the scoop is as attractive as Watergate Revisited, the ratings come first. Throughout his first term and well into the second, Reagan was coddled by the mainstream press. His agenda, designed to rebuild the American spirit and entice the country to once again "stand tall," set in motion a bandwagon which the media immediately boarded for its own profiL Live coverage of retumed hostages shaking hands with their savior, the President, were deemed valuable enough by the powerful soap opera sponsors to warrant day-time viewing. No doubt the major sponsors also saw the money-making potential of last year's Fourth of July celebration in New York City, in which the figurehead former actor and actress were star attractions, and of the homecoming celebrations of battleships returning from Grenada and Libya. These and many similar episodes were played up in hopes that people would awaken with rejuvenated nationalist spirit. Good for the working man, good for America, good for ABC. The astute among the listening public must have known much earlier than last November that Reagan is a detached president with questionable control over his own mental faculties. Earlier than November he fumbled at news conferences, once calling the Austrian airport where members of a terrorist group massacred travellers near an El Al departure gate "the Vietnam airport." Dan Rather and Torn Brokaw could not have missed the President's inane responses to questions conceming the Reykjavik fiasco, after which White House staff members scrambled for retractions and re-interpretations. And yet the mainstream press had long before conceded to a presidential mandate. Members of the Administration wasted no time in privately making use of it to contravene the Boland Amendment and the embargo against America's perceived archenemy Iran. To excuse their acceptance of this mandate, the media cited the immense popularity of the President until a small Lebanese newspaper broke the controversy open. Seeing a need for America to escape "the Vietnam syndrome", the major media encouraged the retum to an aggressive foreign policy and tolerated Reagan's "traditional American values". When they dared to attempt open critícism, it was with words carefully couched in the rhetoric of a renewed patriotism. In this way, they could avoid drawing fire from a vocal conservative watchdog like former White House Communications Director Patrick Buchanan. Only after the Reagan "revolution" began to burn out did the mainstream media begin to tie together accumulating evidence of covert U.S. govemment involvement in Central America. The real catalyst was the . camera coverage of the interrogation and trial of Eugene Hasenfus in Nicaragua, though there were scattered reports long before this of the North-Secord-Channell contra connection in The New York Times, and more frequent reports in alternative sources such as In These Times. The story began to spill over and could no longer be hidden by presidential mandate or allegations of a lack of supporting evidence. When the extent of the not-so covert illegalities became clear, the dormant Watergate spirit in the Washington press corps came rushing to the surface. No longer was it so profitable, exciting, or fashionable to cater to the President's wishes. Only now do we hear and read stories about the distance Reagan has maintained through the years from real decisión making. Only now is it conveyed to the mass audience that Reagan is not the wise and effective paternal figure as previously portrayed. The best advice (see TV, next page) TV (from page 6) given Mr. Reagan lately has been to stay away from direct confrontation with the members of the press who linger beside the presidential helicopter destined for Camp David. Although the guiding hand of mainstream reporters has swung against the President, one does not sense that their editors, publishers and broadcasters are ready to abandon Reagan. Even the Tower Commission report has not affected their allegiance. They don't like the idea of America ingloriously losing another presi-dent less than two decades after the Nixon debacle. All the evidence from the congres-sional investigations is not yet in. The media will wait until the full extent of Reagan's role in the sale of arms and the diversion of funds is made -public before it Iets go of a president it has kept afloat for nearly six years.