Who's Who In The La Penca Bombing Case 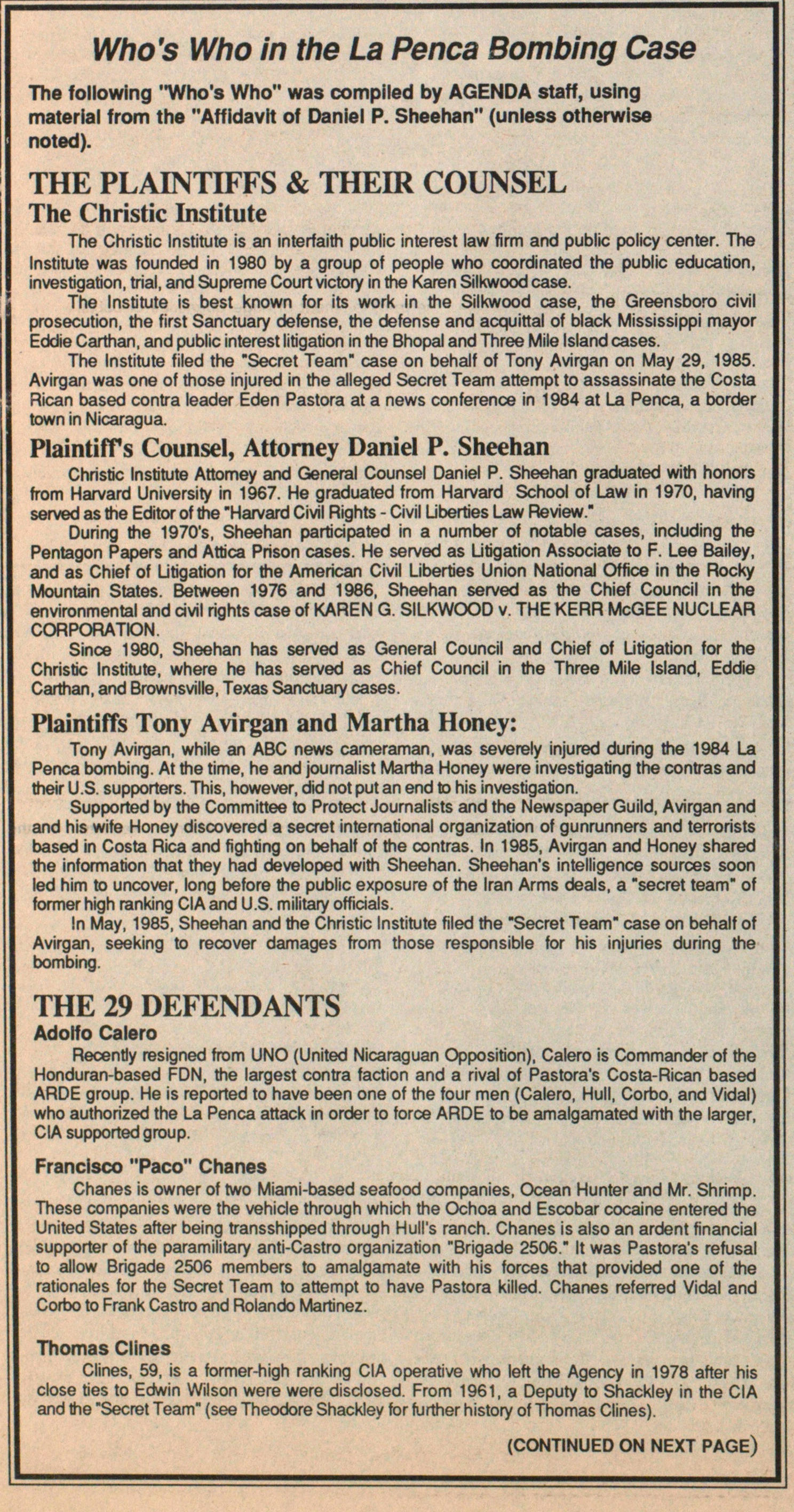 The following "Who's Who" was compiled by AGENDA staff, using material from the "Affidavit of Daniel P. Sheehan" (unless otherwise noted). THE PLAINTIFFS & THEIR COUNSEL The Christic Institute The Christic Instituto is an interfaith public interest law firm and public policy center. The Institute was founded in 1980 by a group of people who coordinated the public education, mvestigation, trial, and Supreme Court victory in the Karen Silkwood case. The Institute is best known for its work in the Silkwood case, the Greensboro civil prosecution, the first Sanctuary defense, the defense and acquittal of black Mississippi mayor Eddie Carthan, and public interest litigation in the Bhopal and Three Mile Island cases. The Institute filed the "Secret Team" case on behalf of Tony Avirgan on May 29, 1985. Avirgan was one of those injured in the alleged Secret Team attempt to assassinate the Costa Rican based contra leader Eden Pastora at a news conference in 1984 at La Penca, a border town in Nicaragua. PlaintifFs Counsel, Attorney Daniel P. Sheehan Christic Institute Attomey and General Counsel Daniel P. Sheehan graduated with honors from Harvard University in 1967. He graduated from Harvard School of Law in 1970, having served as the Editor of the "Harvard Civil Rights - Civil überties Law Review." During the 1970's, Sheehan participated in a number of notable cases, including the Pentagon Papers and Atbca Prison cases. He served as Litigation Associate to F. Lee Bailey, and as Chief of Litigation for the American Civil Libertes Union National Office in the Rocky Mountain States. Between 1976 and 1986, Sheehan served as the Chief Council in the environmental and civil rights case of KAREN G. SILKWOOD v. THE KERR McGEE NUCLEAR CORPORATION. Since 1980, Sheehan has served as General Council and Chief of Litigation for the Christic Institute, where he has served as Chief Council in the Three Mile Island, Eddie Carthan, and Brownsville, Texas Sanctuary cases. Plaintiffs Tony Avirgan and Martha Honey: Tony Avirgan, while an ABC news cameraman, was severely injured during the 1984 La Penca bombing. At the time, he and journalist Martha Honey were investigating the contras and their U.S. supporters. This, however, did not put an end to his investigaton. Supported by the Committee to Protect Journalists and the Newspaper Guild, Avirgan and and his wife Honey discovered a secret international organization of gunrunners and terrorists based in Costa Rica and fighting on behalf of the contras. In 1 985, Avirgan and Honey shared the information that they had developed with Sheehan. Sheehan's intelligence sou rees soon led him to uncover, long before the public exposure of the Iran Arms deals, a "secret team" of former high ranking CIA and U.S. military officials. In May, 1985, Sheehan and the Christic Institute filed the "Secret Team" case on behalf of Avirgan, seeking to recover damages from those responsible for his injuries during the bombing. THE 29 DEFENDANTS Adolfo Calero Recently resigned from UNO (United Nicaraguan Opposition), Calero is Commander of the Honduran-based FDN, the largest contra faction and a rival of Pastora's Costa-Rican based ARDE group. He is reported to have been one of the four men (Calero, Huil, Corbo, and Vidal) who authorized the La Penca attack in order to torce ARDE to be amalgamated with the larger, CIA supported group. Francisco "Paco" Chañes Chañes is owner of two Miami-based seafood oompanies, Ocean Hunter and Mr. Shrimp. These companies were the vehicle through which the Ochoa and Escobar cocaine entered the United States after being transshipped through Hull's ranch. Chañes is also an ardent finanaal supporter of the paramilitary anti-Castro organization "Brigade 2506." It was Pastora's refusal to allow Brigade 2506 members to amalgámate with his forces that provided one of the rationales for the Secret Team to attempt to have Pastora killed. Chañes referred Vidal and Corbo to Frank Castro and Rolando Martínez. Thomas Clines Clines, 59, is a former-high ranking CIA operative who left the Agency in 1978 after his close ties to Edwin Wilson were were disclosed. From 1961, a Deputy to Shackley in the CIA and the "Secret Team" (see Theodore Shackley for further history of Thomas Clines). (CONTINUED ON NEXT PAGE)