Forget All The Lies And Propaganda 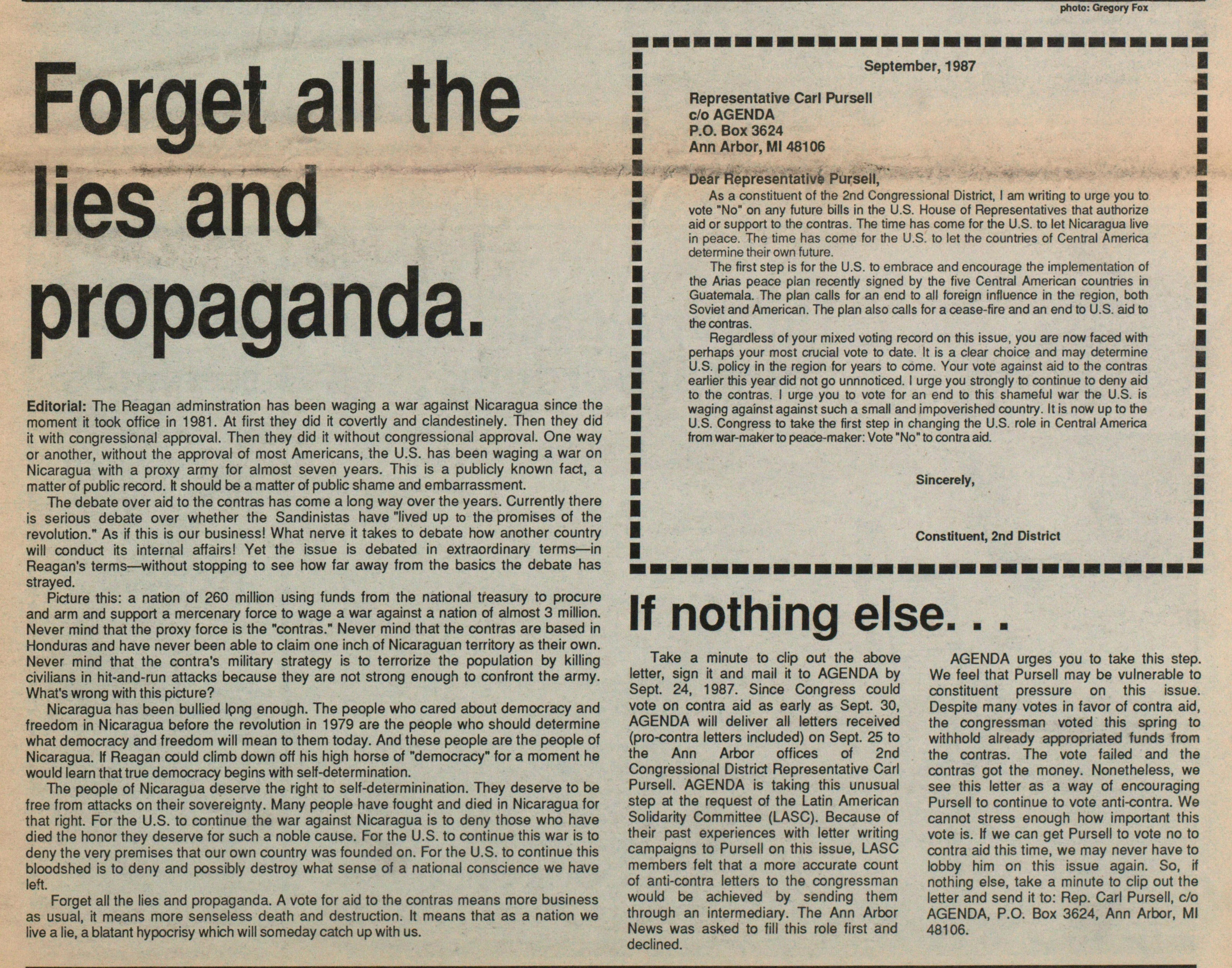 Editorial: The Reagan adminstratbn has been waging a war against Nicaragua since the moment it took office in 1981. At first they did it covertly and clandestinely. Then they did it with congressional approval. Then they did it without congressional approval. One way or another, without the approval of most Americans, the U.S. has been waging a war on Nicaragua with a proxy army for almost seven years. This is a publicly known fact, a matter of public record. It should be a matter of public shame and embarrassment. The debate over aid to the contras has come a long way over the years. Currently there is serious debate over whether the Sandinistas have "lived up to the promises of the revolution." As if this is our business! What nerve it takes to debate how another country will conduct ts nternal affairs! Yet the issue is debated in extraordinary terms - n Reagan's terms - without stopping to see how far away from the basics the debate has strayed. Picture this: a natbn of 260 million using funds from the national treasury to procure and arm and support a mercenary forcé to wage a war against a nation of almost 3 million. Never mind that the proxy force is the "contras." Never mind that the contras are based in Honduras and have never been able to claim one inch of Nicaraguan territory as their own. Never mind that the contra's military strategy is to terrorize the population by killing civilians in hit-and-run attacks because they are not strong enough to confront the army. What's wrong with this picture? Nicaragua has been bullied Ipng enough. The people who cared about democracy and freedom in Nicaragua before the revolution in 1979 are the people who should determine what democracy and freedom will mean to them today. And these people are the people of Nicaragua. If Reagan could climb down off his high horse of "democracy" for a moment he would learn thattrue democracy begins with self-determination. The people of Nicaragua deserve the right to self-determinination. They deserve to be free from attacks on their sovereignty. Many people have fought and died in Nicaragua for that right. For the U.S. to continue the war against Nicaragua is to deny those who have died the honor they deserve for such a noble cause. For the U.S. to continue this war is to deny the very premises that our own country was founded on. For the U.S. to continue this bloodshed is to deny and possibly destroy what sense of a national conscience we have left. Forget all the lies and propaganda. A vote for aid to the contras means more business as usual, t means more senseless death and destruction. It means that as a nation we live a lie, a blatant hypocrisy which will someday catch up with us. September, 1987 Representative Cari Pursell co AGENDA P.O. Box 3624 AnnArbor, Ml 48106 Dea r Representative Pursell, As a constituent of the 2nd Congressional District, I am writing to urge you to vote "No" on any future bilis in the U.S. House of Representatives that authorize aid or support to the contras. The time has come for the U.S. to let Nicaragua live n peace. The time has come for the U.S. to let the countries of Central America determine their own future. m The first step is for the U.S. to embrace and encourage the implementation of the Arias peace plan recently signed by the five Central American countries in Guatemala. The plan calis for an end to all foreign influence in the región, both Soviet and American. The plan also calis for a cease-fire and an end to U.S. aid to the contras. Regardless of your mixed voting record on this issue, you are now faced with perhaps your most crucial vote to date. It is a clear choice and may determine U.S. policy in the región for years to come. Your vote against aid to the contras earlier this year did not go unnnoticed. I urge you strongly to continue to deny aid to the contras. I urge you to vote for an end to this shameful war the U.S. is waging against against such a small and impoverished country. It is now up to the U.S. Congress to take the first step in changing the U.S. role in Central America from war-maker to peace-maker: Vote "No" to contra aid. Sincerely, Constituent, 2nd District