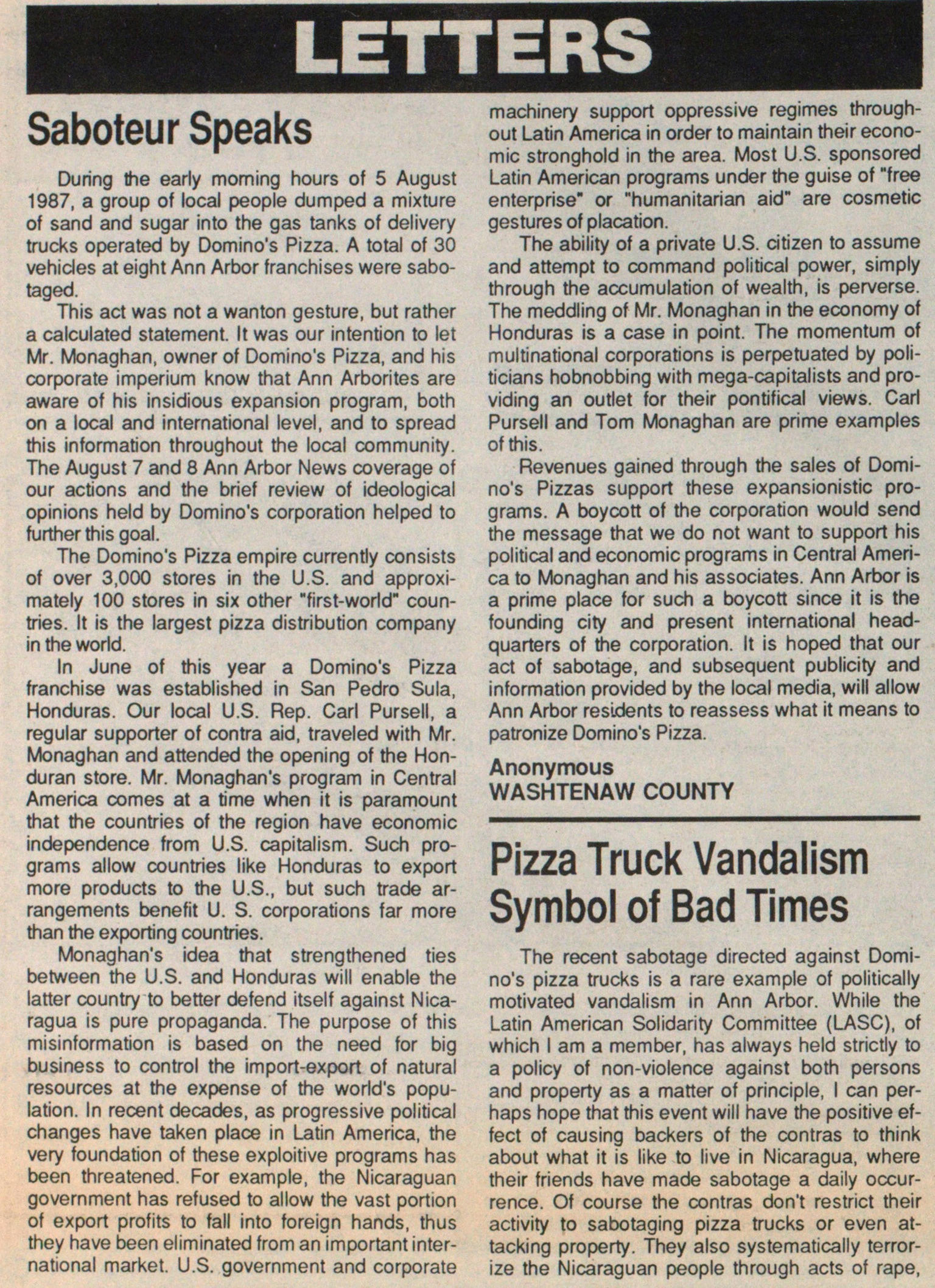 During the early moming hours of 5 August 1987, a group of local people dumped a mixture of sand and sugar nto the gas tanks of delivery trucks operated by Domino's Pizza. A total of 30 vehicles at eight Ann Arbor franchises were sabotaged. This act was not a wanton gesture, but rather a calculated statement. It was our intention to let Mr. Monaghan, owner of Domino's Pizza, and his corporate imperium know that Ann Arborites are aware of his insidious expansión program, both on a local and international Ie vel, and to spread this nformation throughout the local community. The August 7 and 8 Ann Arbor News coverage of our actions and the brief review of ideological opinions held by Domino's Corporation helped to further this goal. The Domino's Pizza empire currently consists of over 3,000 stores in the U.S. and approximately 100 stores in six other "first-world" countries. It is the largest pizza distribution company in the world. In June of this year a Domino's Pizza franchise was established in San Pedro Sula, Honduras. Our local U.S. Rep. Cari Pursell, a regular supporter of contra aid, traveled with Mr. Monaghan and attended the opening of the Honduran store. Mr. Monaghan's program in Central America comes at a time when it is paramount that the countries of the región have economie independence from U.S. capitalism. Such programs allow countries like Honduras to export more products to the U.S., but such trade arrangements benefit U. S. corporations far more than the exporting countries. Monaghan's idea that strengthened ties between the U.S. and Honduras will enable the latter country to better defend itself against Nicaragua is pure propaganda. The purpose of this misinformation is based on the need for big business to control the import-export of natural resources at the expense of the world's population. In recent decades, as progressive political changes have taken place in Latín America, the very foundation of these exploitive programs has been threatened. For example, the Nicaraguan government has refused to allow the vast portion of export profits to fall into foreign hands, thus they have been eliminated from an important international market. U.S. government and corporate machinery support oppressive regimes throughout Latín America n order to maintain their economie stronghold in the area. Most U.S. sponsored Latin American programs under the guise of "free enterprise" or "humanitarian aid" are cosmetic gestures of placa tion. The ability of a private U.S. dtizen to assume and attempt to command political power, simply through the accumulation of wealth, is perverse. The meddling of Mr. Monaghan in the economy of Honduras is a case in point. The momentum of multinational corporations is perpetuated by politicians hobnobbing with mega-capitalists and providing an outlet for their pontifical views. Cari Pursell and Tom Monaghan are prime examples ofthis. Revenues gained through the sales of Domino's Pizzas support these expansionistic programs. A boycott of the Corporation would send the message that we do not want to support his political and economie programs in Central America to Monaghan and his associates. Ann Arbor is a prime place for such a boycott since it is the founding city and present international headquarters of the corporation. It is hoped that our act of sabotage, and subsequent publicity and information provided by the local media, will allow Ann Arbor resldents to reassess what it means to patronize Domino's Pizza.