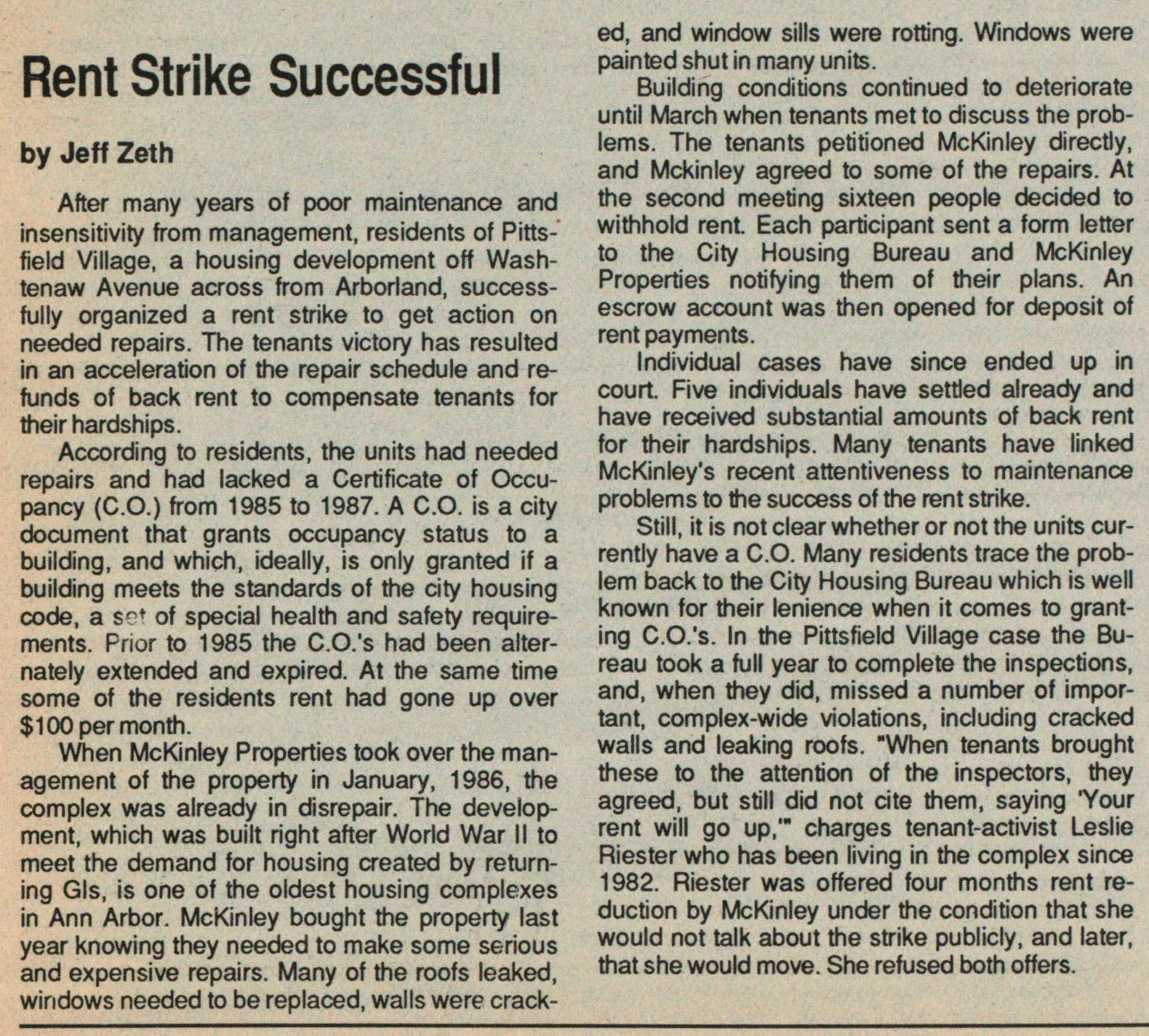 After many years of poor maintenance and insensitivity from management, residents of Pittsfield Village, a housing development off Washtenaw Avenue across from Arboriand, successfully organized a rent strike to get action on neéded repairs. The tenants victory has resulted in an acceleration of the repair schedule and refunds of back rent to compénsate tenants for theirhardships. According to residents, the units had needed repairs and had lacked a Certifícate of Occupancy (CO.) from 1985 to 1987. A CO. is a city document that grants occupancy status to a building, and which, ideally, is only granted if a building meets the standards of the city housing code, a set of special health and safety requirements. Prior to 1985 the C.O.'s had been alternately extended and expired. At the same time some of the residents rent had gone up over $100permonth. When McKinley Properties took over the management of the property in January, 1986, the complex was already in disrepair. The development, which was built right after World War II to meet the demand for housing created by returning Gis, is one of the oidest housing complexes in Ann Arbor. McKinley bought the property last year knowing they needed to make some serious and expensive repairs. Many of the roofs leaked, Windows needed to be replaced, walls were ed, and window sills were rotting. Windows were painted shut in many units. Building conditions continued to deteriórate until March when tenants met to discuss the problems. The tenants petitioned McKinley directly, and Mckinley agreed to some of the repairs. At the second meeting sixteen people decided to withhold rent. Each participant sent a form letter to the City Housing Bureau and McKinley Properties notifying them of their plans. An escrow account was then opened for deposit of rent payments. Individual cases have si nee ended up in court. Five individuals have settled already and have received substantial amounts of back rent for their hardships. Many tenants have linked McKinley's recent attentiveness to maintenance problems to the success of the rent strike. Stilt, it is not clear whether or not the units currently have a CO. Many residents trace the problem back to the City Housing Bureau which is well known for their lenience when it comes to granting C.O.'s. In the Pittsfield Village case the Bureau took a full year to complete the inspections, and, when they did, missed a number of important, complex-wide violations, including cracked walls and leaking roofs. "When tenants brought these to the attention of the inspectors, they agreed, but still did not cite them, saying 'Your rent will go up," charges tenant-activist Leslie Riester who has been living in the complex since 1982. Riester was offered four months rent reduction by McKinley under the condition that she would not talk about the strike publicly, and later, that she would move. She refused both offers.