Deportation Proceedings Continue Against The L.a.-8 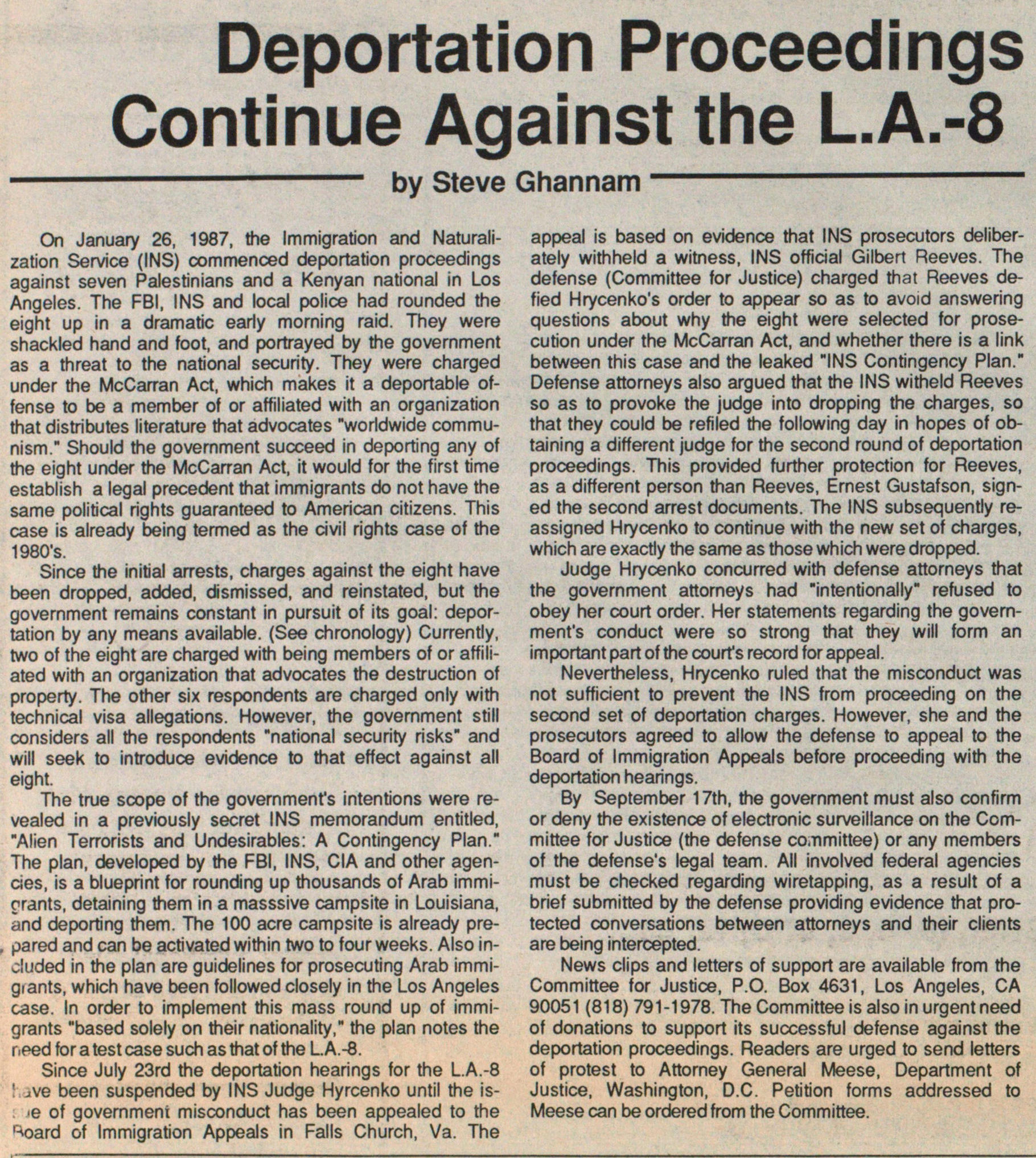 On January 26, 1987, the Immigration and Naturalization Service (INS) commenced deportation proceedings against seven Palestinians and a Kenyan national n Los Angeles. The FBI, INS and local pólice had rounded the eight up in a dramatic early morning raid. They were shackled hand and foot, and portrayed by the government as a threat to the national security. They were charged under the McCarran Act, which makes it a deportable offense to be a member of or affiliated with an organization that distributes literature that advocates "worldwide communism." Should the government succeed in deporting any of the eight under the McCarran Act, it would for the first time establish a legal precedent that immigrants do not have the same political rights guaranteed to American citizens. This case is already being termed as the civil rights case of the 1980's. Since the initial arrests, charges against the eight have been dropped, added, dismissed, and reinstated, but the government remains constant in pursuit of its goal: deportation by any means available. (See chronology) Currently, two of the eight are charged with being members of or affiliated with an organization that advocates the destruction of property. The other six respondents are charged only with technical visa allegations. However, the government still considers all the respondents "national security risks" and will seek to introduce evidence to that effect against all eight. The true scope of the government's intentions were revealed in a previously secret INS memorandum entitled, "Alien Terrorists and Undesirables: A Contingency Plan." The plan, developed by the FBI, INS, CIA and other agencies, is a blueprint for rounding up thousands of Arab immiorants, detaining them in a masssive campsite in Louisiana, and deporting them. The 100 acre campsite is already pre, pared and can be acti vated within two to four weeks. Also included in the plan are guidelines for prosecuting Arab immigiants, which have been followed closely in the Los Angeles case. In order to mplement this mass round up of immigrants "based solely on their nationality," the plan notes the need for a test case such as that of the L.A.-8. Since July 23rd the deportation hearings for the LA. -8 '. jve been suspended by INS Judge Hyrcenko until the is■e of government misconduct has been appealed to the roard of Immigration Appeals in Falls Church, Va. The appeal is based on evidence that INS prosecutors deliberately withheld a witness, INS official Gilbert Reeves. The defense (Committee for Justice) charged that Reeves defied Hrycenko's order to appear so as to avoid answering questions about why the eight were selected for prosecution under the McCarran Act, and whether there is a link between this case and the leaked "INS Contingency Plan." Defense attorneys also argued that the INS witheid Reeves so as to provoke the judge into dropping the charges, so that they could be refiled the following day in hopes of obtaining a different judge for the second round of deportation proceedings. This provided further protection for Reeves, as a different person than Reeves, Ernest Gustafson, signed the second arrest documents. The INS subsequently reassigned Hrycenko to continue with the new set of charges, which are exactly the same as those which were dropped. Judge Hrycenko concurred with defense attorneys that the government attorneys had "intentionally" refused to obey her court order. Her statements regarding the government's conduct were so strong that they will form an important part of the courf s record for appeal. Nevertheless, Hrycenko ruled that the misconduct was not sufficient to prevent the INS from proceeding on the second set of deportation charges. However, she and the prosecutors agreed to allow the defense to appeal to the Board of Immigration Appeals before proceeding with the deportation hearings. By September 1 7th, the government must also confirm or deny the existenoe of electronic surveillance on the Committee for Justice (the defense co.nmittee) or any members of the defense's legal team. All in volved federal agencies must be checked regarding wiretapping, as a result of a brief submitted by the defense providing evidence that protected conversations between attorneys and their clients are being intercepted. News clips and letters of support are available from the Committee for Justice, P.O. Box 4631, Los Angeles, CA 90051 (818)791-1978. The Committee is also in urgent need of donations to support its successful defense against the deportation proceedings. Readers are urged to send letters of protest to Attorney General Meese, Department of Justice, Washington, D.C. Petition forms addressed to Meese can be ordered from the Committee.