Are You As Knowledgable About Nicaragua As You Think? Here's A Chance To Test Your Expertise 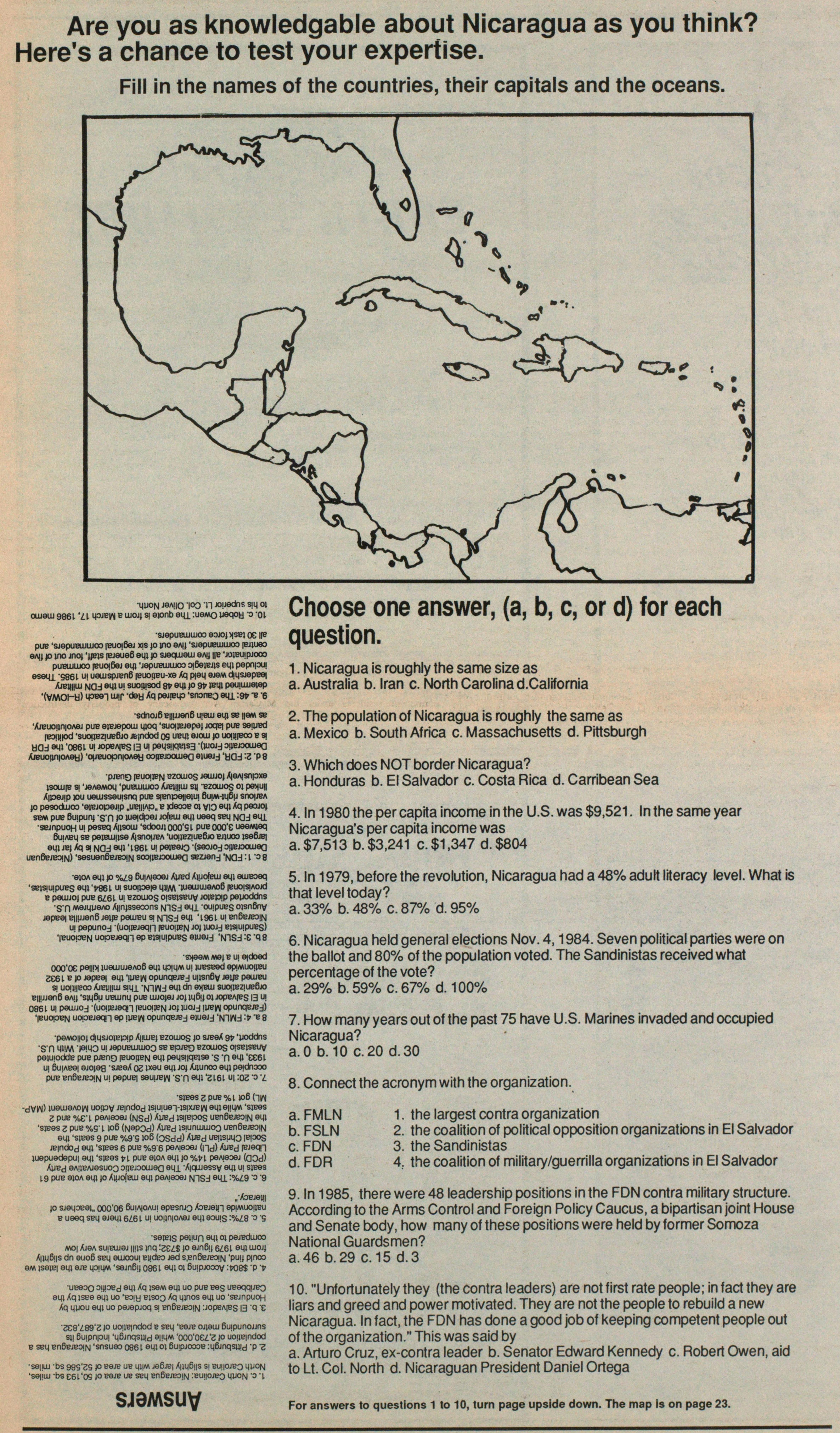 Fill in the names of the countries, their capitals and the oceans.

1. Nicaragua is roughly the same size as

2. The population of Nicaragua is roughly the same as

3. Which does NOT border Nicaragua?

5. In 1979, before the revolution, Nicaragua had a 48% adult literacy level. What is that level today?

6. Nicaragua held general elections Nov. 4, 1984. Seven political parties were on the ballot and 80% of the population voted. The Sandinistas received what percentage of the vote?

7. How many years out of the past 75 have U.S. Marines invaded and occupied Nicaragua?

8. Connect the acronym with the organization.

9. In 1985, there were 48 leadership positions in the FDN contra military structure. According to the Arms Control and Foreign Policy Caucus, a bipartisan joint House and Senate body, how many of these positions were held by former Somoza National Guardsmen?

10. "Unfortunately they (the contra leaders) are not first rate people; in fact they are liars and greed and power motivated. They are not the people to rebuild a new Nicaragua. In fact, the FDN has done a good job of keeping competent people out of the organization." This was said by

3. b. El Salvador: Nicaragua is bordered on the north by Honduras, on the south by Costa Rica, on the east by the Caribbean Sea and on the west by the Pacific Ocean.

4. d. $804: According to the 1980 figures, which are the latest we could find, Nicaragua's per capita income has gone up slightly from the 1979 figure of $732; but still remains very low compared to the United  States.

7. c. 20: In 1912, the U.S. Marines landed in Nicaragua and occupied the country for the next 20 years. Before leaving in 1933, the U.S. established the National Guard and appointed Anastasio Somoza Garcia as Commander in Chief. With U.S. support, 46 years of Somoza family dictatorship followed.

8. a. 4: FMLN, Frente Farabundo Marti de Liberacion Nacional, (Farabundo Marti Front for National Liberation). Formed in 1980 in El Salvador to fight for reform and human rights, five guerrilla organizations make up the FMLN. This military coalition is named after Agustin Farabundo Marti, the leader of a 1932 nationwide peasant in which the government killed 30,000 people in a few weeks.

8. b. 3: FSLN, Frente Sandinista de Liberacion Nacional, (Sandinista Front for National Liberation). Founded in Nicaragua in 1961, the FSLN is named after guerrilla leader Augusto Sandino. The FSLN successfully overthrew U.S. supported dictator Anastasio Somoza in 1979 and formed a provisional government. With elections in 1984, the Sandinistas became the majority party receiving 67% of the vote.

8. c. 1: FDN, Fuerzas Democraticos Nicaraguenses, (Nicaraguan Democratic Forces). Created in 1981, the FDN is by far the largest contra organization, variously estimated as having between 3,000 and 15,000 troops, mostly based in Honduras. The FDN has been the major recipient of U.S. funding and was forced by the CIA to accept a "civilian" directorate, composted of various right-wing intellectuals and businessmen not directly linked to Somoza. Its military command, however, is almost exclusively former Somoza National Guard.

8 d. 2: FDR, Frente Democratico Revolucionario, (Revolutionary Democratic Front). Established in El Salvador in 1980, the FDR is a coalition of more than 50 popular organizations, political parties and labor federations, both moderate and revolutionary, as well as the main guerrilla groups.

9. a. 46: The Caucus, chaired by Rep. Jim Leach (R-IOWA), determined that 46 of the 48 positions in the FDN military leadership were held by ex-national guardsmen in 1985. These included the strategic commander, the regional command coordinator, all five members of the general staff, four out of five central commanders, five out of six regional commanders, and all 30 task force commanders.