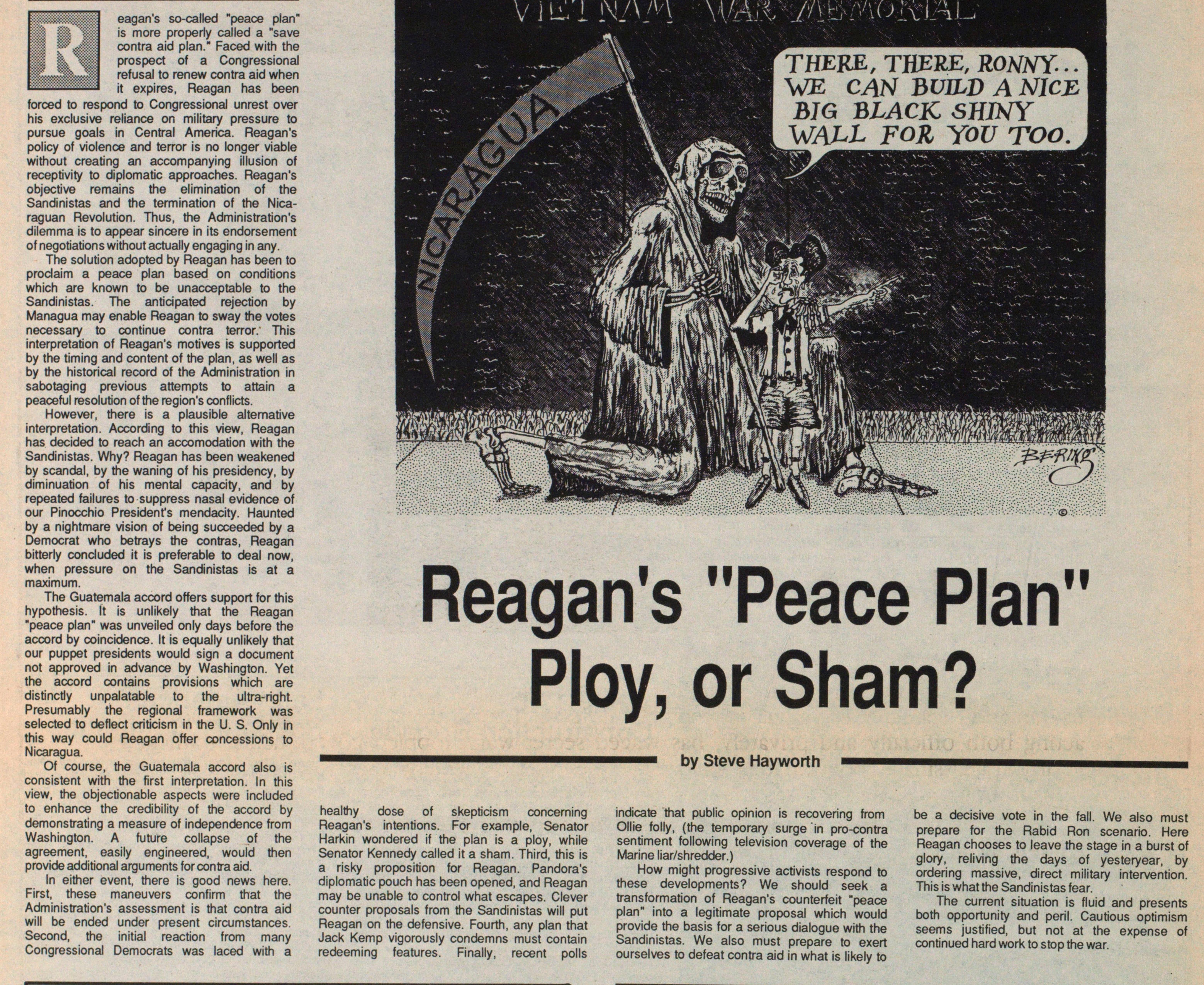 eagan's so-called "peace plan" is more properly called a "save contra aid plan." Faced with the prospect of a Congressional refusal to renew contra aid when „„.Big,,] jj eXpjres Reagan has been forced to respond to Congressional unrest over his exclusive reliance on military pressure to pursue goals in Central America. Reagan's policy of violence and terror is no longer viable without creating an accompanying illusion of receptivity to diplomatic approaches. Reagan's objective remains the elimination of the Sandinistas and the termination of the Nicaraguan Revolution. Thus, the Administration's dilemma is to appear sincere in its endorsement of negotiations without actually engaging in any. The solution adopted by Reagan has been to prodaim a peace plan based on conditions which are known to be unacceptable to the Sandinistas. The anticipated rejection by Managua may enable Reagan to sway the votes necessary to continue contra terror.' This interpretaron of Reagan's motives is supported by the timing and content of the plan, as well as by the historical record of the Administration in sabotaging previous attempts to attain a peaceful resolution of the region's conflicts. However, there is a plausible altemative interpretation. According to this view, Reagan has decided to reach an accomodation with the Sandinistas. Why? Reagan has been weakened by scandal, by the waning of his presidency, by diminuation of his mental capacity, and by repeated failures to suppress nasal evidence of our Pinocchio President's mendacity. Haunted by a nightmare visión of being succeeded by a Democrat who betrays the contras, Reagan bitterly concluded it is preferable to deal now, when pressure on the Sandinistas is at a maximum. The Guatemala accord offers support for this hypothesis. It is unlikely that the Reagan "peace plan" was unveiled only days before the accord by coincidence. It is equally unlikely that our puppet presidents would sign a document not approved in advance by Washington. Yet the accord contains provisions which are distinctly unpalatable to the ultra-right. Presumably the regional framework was selected to deflect criticism in the U. S. Only in this way could Reagan offer concessions to Nicaragua. Of course, the Guatemala accord also is consistent with the first nterpretation. In this view, the objectionable aspects were included to enhance the credibility of the accord by demonstrating a measure of independence from Washington. A future collapse of the agreement, easily engineered, would then provide additional arguments for contra aid. In either event, there is good news here. First, these maneuvers confirm that the Administration's assessment is that contra aid will be ended under present circumstances. Second, the initial reaction from many Congressional Democrats was laced with a healthy dose of skepticism concerning Reagan's intentions. For example, Senator Harkin wondered if the plan is a ploy, while Senator Kennedy called it a sham. Third, this is a risky proposition for Reagan. Pandora's diplomatic pouch has been opened, and Reagan may be unable to control what escapes. Clever counter proposals from the Sandinistas will put Reagan on the defensive. Fourth, any plan that Jack Kemp vigorously condemns must contain redeeming features. Finally, recent polls indícate that public opinión is recovering from Ollie folly, (the temporary surge in pro-contra sentiment following televisión coverage of the Marine liarshredder.) How might progressive activists respond to these developments? We should seek a transformation of Reagan's counterfeit "peace plan" into a legitímate proposal which would provide the basis for a serious dialogue with the Sandinistas. We also must prepare to exert ourselves to defeat contra aid n what is likely to be a decisive vote n the fall. We also must prepare for the Rabid Ron scenario. Here Reagan chooses to leave the stage n a burst of glory, reliving the days of yesteryear, by ordering massive, direct military intervention. This is what the Sandinistas fear. The current situation is fluid and presente both opportunity and peni. Cautious optimism seems justified, but not at the expense of continued hard work to stop the war.