Life In Nicaragua A Mother's Testimony 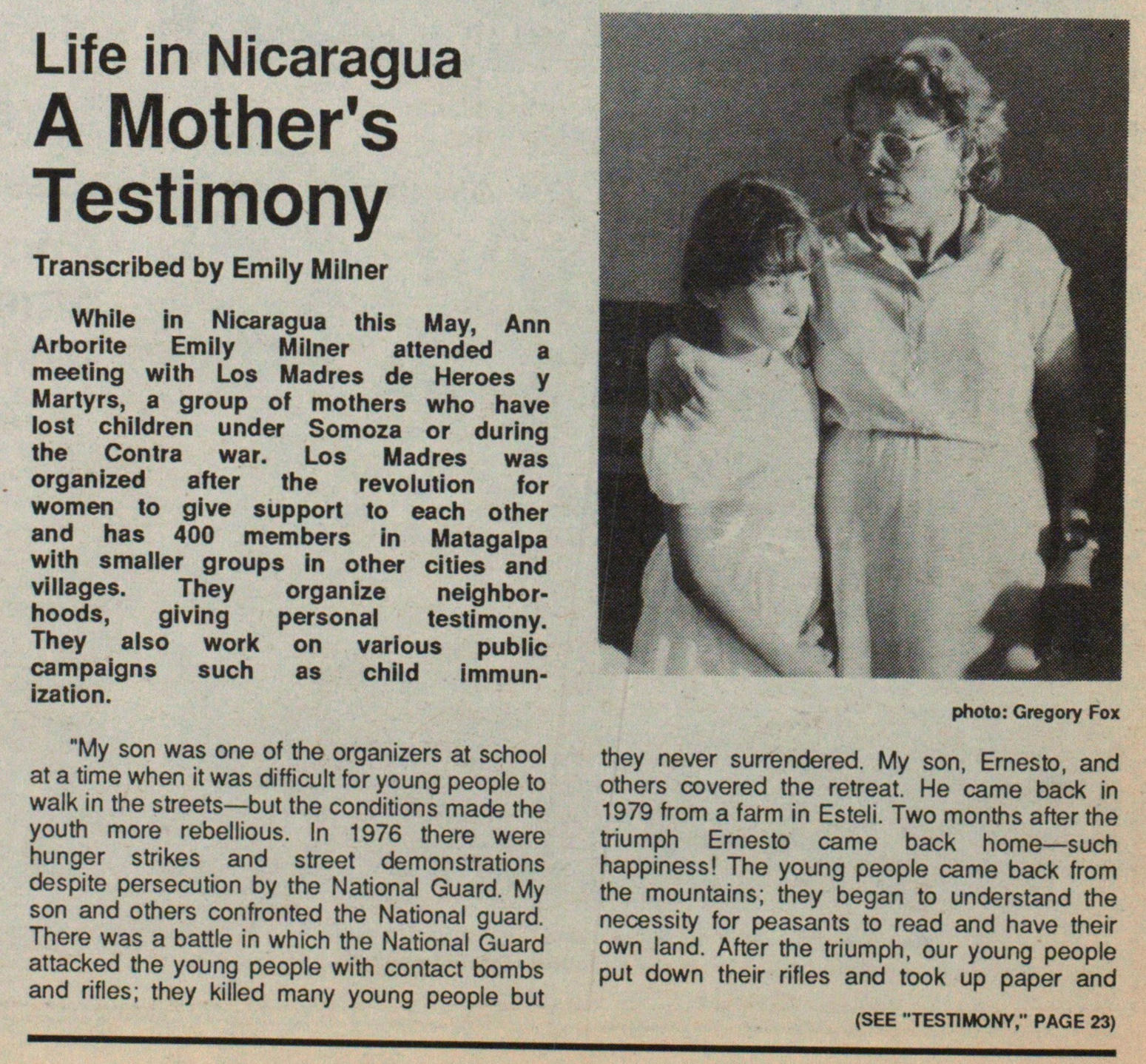 While in Nicaragua this May, Ann Arborite Emily Milner attended a meeting with Los Madres de Héroes y Martyrs, a group of mothers who have lost children under Somoza or during the Contra war. Los Madres was organized after the revolution for women to give support to each other and has 400 members in Matagalpa with smaller groups in other cities and villages. They organize neighborhoods, giving personal testimony. They also work on various public campaigns such as child immunization. "My son was one of the organizers at school at a time when t was difficult for young people to walk in the streets- but the conditions made the youth more rebellious. In 1976 there were hunger strikes and street demonstrations despite persecution by the National Guard. My son and others confronted the National guard. There was a battle in which the National Guard attacked the young people with contact bombs and rifles; they killed many young people but they never surrendered. My son, Ernesto, and others covered the retreat. He carne back in 1979 from a farm in Esteli. Two months after the triumph Ernesto carne back home - such happiness! The young people carne back from the mountains; they began to understand the necessity for peasants to read and have their own land. After the triumph, our young people put down their rifles and took up paper and (SEE "TESTIMONY," PAGE 23) TESTIMONY (FROM PAGE 12) pens. Ernesto was given [a military role] in the Sandinista Front; he was not a military man but asked to be sent to work with the cooperatives. In Nov. 1984 he was ambushed and killed; hefell withöothers. But those who feil have not ever died; when I see [most of you] who are all so young, I remember those who died. Those who died - we see them in their work. We are building a gallery in the park - there is where the barracks were where many were beaten, tortured, massacred. One mother who was not able to be here lost her son in Somoza's jail [there]. After the triumph, the jail was burned to the ground and many bodies were found; it was a cemetery of our people.One man had his eyes punched out while alive; a doctor was put in an underground cell and burned. So we want that piece of land as a monument to those who died underSomoza."