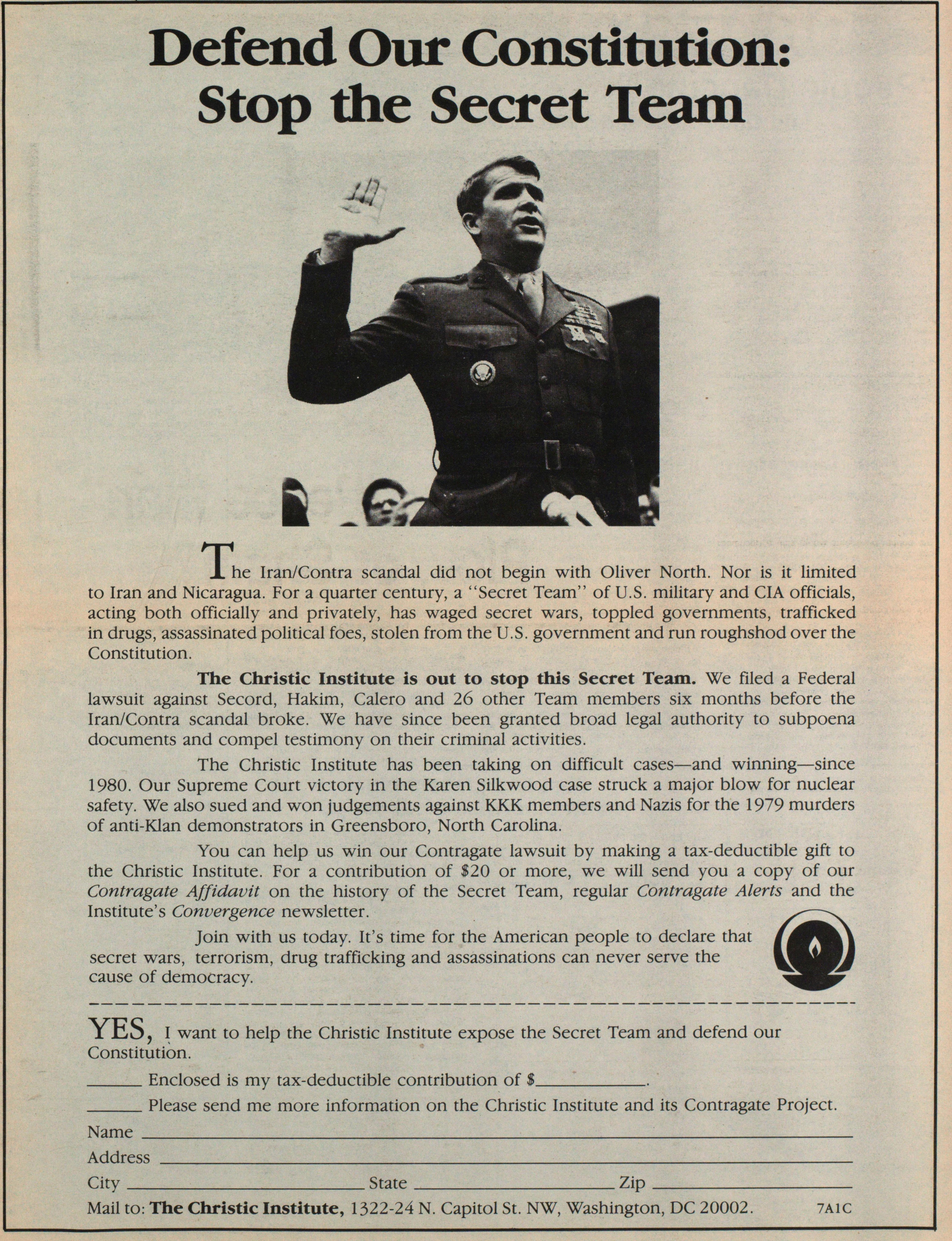 é ZH -mmmJ f ■ f _Hf __ k "- - _Js_fe,,,-lP, ■ ML M__L T_Í T X he IranContra scandal did not begin with Oliver North. Nor is it limited to Iran and Nicaragua. For a quarter century, a "Secret Team" of U.S. military and CIA officials, acting both officially and privately, has waged secret wars, toppled governments, trafficked in drugs, assassinated political foes, stolen from the U.S. government and run roughshod over the Constitution. The Christic Institute is out to stop this Secret Team. We fïled a Federal lawsuit against Secord, Hakim, Calero and 26 other Team members six months before the IranContra scandal broke. We have since been granted broad legal authority to subpoena documents and compel testimony on their criminal activities. The Christic Institute has been taking on difficult cases - and winning - since 1980. Our Supreme Court victory in the Karen Silkwood case struck a major blow for nuclear safety. We also sued and won judgements against KKK members and Nazis for the 1979 murders of anti-Klan demonstrators in Greensboro, North Carolina. You can help us win our Contragate lawsuit by making a tax-deductible gift to the Christic Institute. For a contribution of $20 or more, we will send you a copy of our Contragate Affidavit on the history of the Secret Team, regular Contragate Alerts and the Institute's Convergence newsletter. 1X Join with us today. It's time for the American people to declare that i secret wars, terrorism, drug trafficking and assassinations can never serve the VSftvLr cause of democracy. r Y .Co, I want to help the Christic Institute exposé the Secret Team and defend our Constitution. Enclosed is my tax-deductible contribution of $ Please send me more information on the Christic Institute and its Contragate Project. Name Address City State Zip Mail to: The Christic Institute, 1322-24 N. Capitol St. NW, Washington, DC 20002. 7Aic