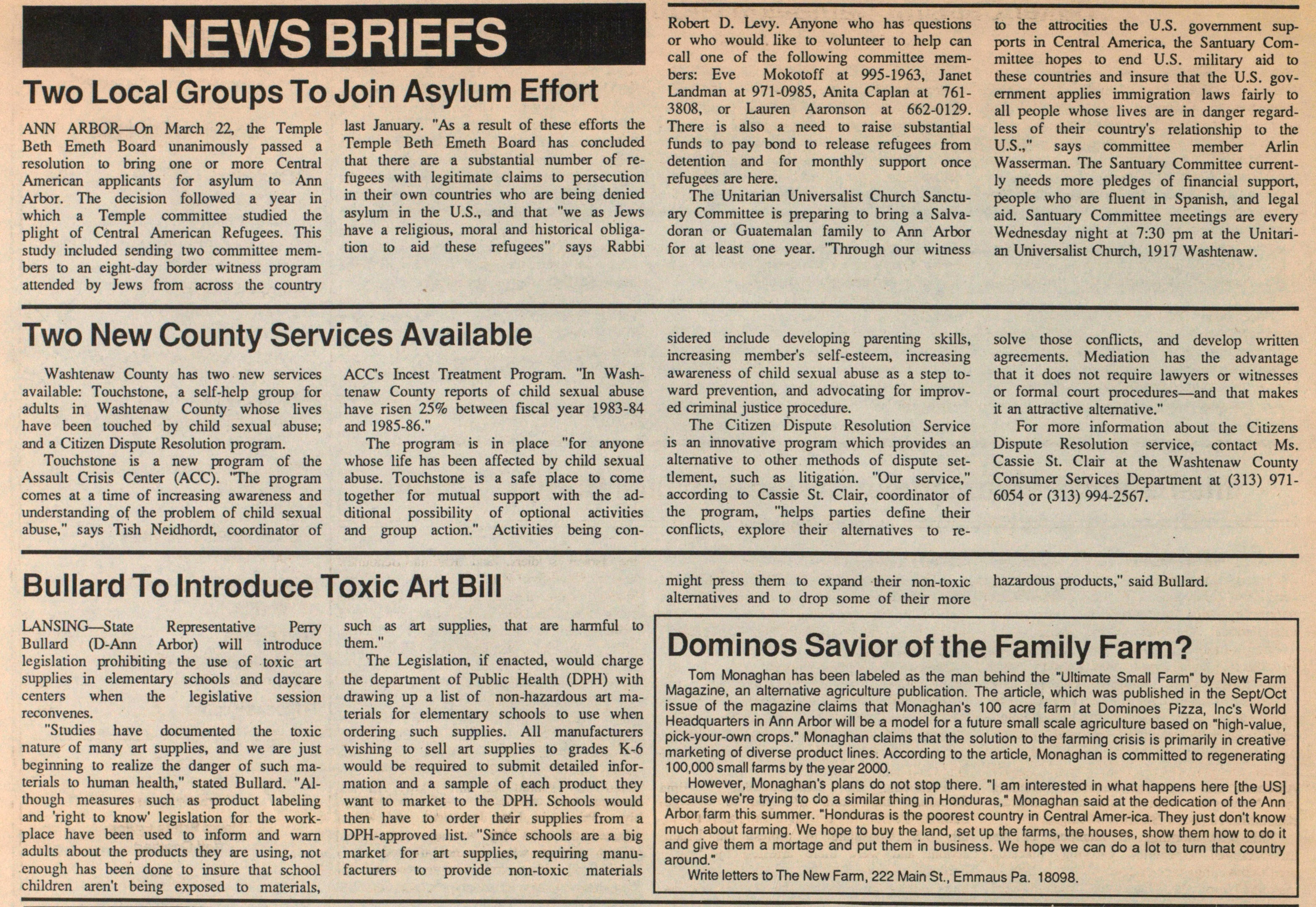 ANN ARBOR- On March 22, the Temple Beth Emeth Board unanimously passed a resolution to bring one or more Central American applicants for asylum to Ann Arbor. The decisión followed a year in which a Temple committee studied the plight of Central American Refugees. This study included sending two committee members to an eight-day border witness program attended by Jews from across the country last January. "As a result of these efforts the Temple Beth Emeth Board has concluded that there are a substantial number of refugees with legitímate claims to persecution in their own countries who are being denied asylum in the U.S., and that "we as Jews have a religious, moral and historical obligation to aid these refugees" says Rabbi Robcrt D. Levy. Anyone who has qucstions or who would like to volunteer to help can cali one of the following committee members: Eve Mokotoff at 995-1963, Janet Landman at 971-0985, Anita Caplan at 7613808, or Lauren Aaronson at 662-0129. There is also a need to raise substantial funds to pay bond to release refugees from detention and for monthly support once refugees are here. The Unitarian Universalist Church Sanctuary Committee is preparing to bring a Salvadoran or Guatemalan family to Ann Arbor for at least one year. "Through our witness to the attrocities the U.S. govemment supports in Central America, the Santuary Committee hopes to end U.S. military aid to these countries and insure that the U.S. government applies immigration laws fairly to all people whose lives are in danger regardless of their country's relationship to the U.S.," says committee member Arlin Wasserman. The Santuary Committee currently needs more pledges of financial support, people who are fluent in Spanish, and legal aid. Santuary Committee meetings are every Wednesday night at 7:30 pm at the Unitarian Universalist Church, 1917 Washtenaw. Two New County Services Available Washtenaw County has two new services available: Touchstone, a self-help group for adults in Washtenaw County whose lives have been touched by child sexual abuse; and a Citizen Dispute Resolution program. Touchstone is a new program of the Assault Crisis Center (ACC). "The program comes at a time of increasing awareness and understanding of the problem of child sexual abuse," says Tish Neidhordt, coördinator of ACC's Incest Treatmcnt Program. "In Washtenaw County repons of child sexual abuse have risen 25% between fiscal year 1983-84 and 1985-86." The program is in place "for anyone whose life has been affected by child sexual abuse. Touchstone is a safe place to come together for mutual support with the additional possibility of optional activities and group action." Activities being sidcred include developing parenting skills, increasing member's self-esteem, increasing awareness of child sexual abuse as a step toward prevention, and advocating for improved criminal justice procedure. The Citizen Dispute Resolution Service is an innovative program which provides an altemative to olher methods of dispute settlement, such as litigation. "Our service," according to Cassie St. Clair, coördinator of the program, "helps partios define their conflicts, explore their altematives to solve those conflicts, and dcvelop written agrccments. Mcdiation has the advantage that it does not require lawyers or witnesses or formal court procedures - and ihat makes it an attractive altcmative." For more information about the Citizens Dispute Resolution service, contact Ms. Cassie St. Clair at the Washtenaw County Consumer Services Department at (313) 9716054 or (313) 994-2567. Bullard To Introduce Toxic Art Bill LANSING - State Representative Perry Bullard (D-Ann Arbor) will introduce lcgislation prohibiting the use of toxic art supplies in elementary schools and daycare centers when the legislative session rcconvenes. "Studies have documented the toxic nature of many art supplies, and we are just beginning to realize the danger of such materials to human health," stated Bullard. "AIthough measures such as product labeling and 'right to know' lcgislation for the workplace have been used to inform and wam adults about the products they are using, not enough has been done to insure that school children aren't being exposed to materials, such as art supplies, that are harmful to them." The Lcgislation, if enacted, would charge the department of Public Health (DPH) with drawing up a list of non-hazardous art materials for elementary schools to use when ordering such supplies. All manufacturers wishing to sell art supplies to grades K-6 would be required to submit detailed information and a sample of each product they want to market to the DPH. Schools would then have to order their supplies from a DPH-approved list. "Since schools are a big market for art supplies, requiring manufacturers to provide non-toxic materials might press them to expand their non-toxic alternatives and to drop some of their more hazardous products," said Bullard. Dóminos Savior of the Family Farm? Torn Monaghan has been labeled as the man behind the "Ultímate Small Farm" by New Farm Magazine, an alternativa agricultura publication. The article, which was published in the SeptOct issue of the magazine claims that Monaghan's 100 acre farm at Dominóes Pizza, Inc's World Headquarters in Ann Arbor will be a model for a future small scale agriculture based on "high-value, pick-your-own crops." Monaghan claims that the solution to the farming crisis is primarily in creative marketing of diverse product lines. According to the article, Monaghan is committed to regenerating 1 00,000 small farms by the year 2000. However, Monaghan's plans do not stop there. "I am interested in what happens here [the US] because we're trying to do a similar thing in Honduras," Monaghan said at the dedication of the Ann Arbor farm this summer. "Honduras is the poorest country in Central Amer-ica. They just don't know much about farming. We hope to buy the land, set up the farms, the houses, show them how to do t and give them a mortage and put them in business. We hope we can do a lot to turn that country around." Write letters to The New Farm, 222 Main St., Emmaus Pa. 18098.